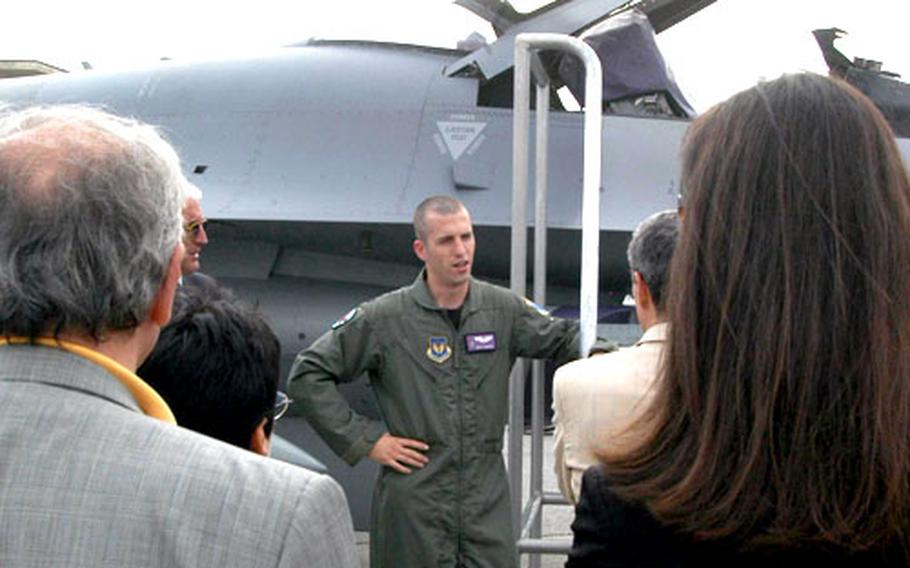 Capt. Wyatt Morrisse from the 510th Fighter Squadron at Aviano Air Base talks about the F-16 to a group of Italian medical providers who were visiting the base Friday. (Kent Harris / S&S)

AVIANO AIR BASE, Italy &#8212; Many Americans stationed at Aviano are used to receiving medical care from local Italian professionals.

Without them, Col. Michael Schaffrinna, the 31st Medical Group commander, said Friday that patients who couldn&#8217;t be treated on base would have to be flown to Landstuhl Regional Medical Center in Germany or to the States.

So the Air Force invited dozens of providers from the network of caregivers to the base to receive a few thank-yous, a tour of the grounds and some of its aircraft and a &#8220;virtual tour&#8221; of the base&#8217;s soon-to-open medical clinic.

While the new facility will likely eliminate the U.S. pediatrics operation in nearby Sacile, Americans will continue to see Italian doctors for a variety of needs, he said.

Those services include specialty care and emergency treatment around the clock. Yates said 30 Americans with emergency cases were treated by Italian medical personnel in 2005. Six of them involved helicopter flights.

Capt. S. Kellie Williams, Tricare Flight chief at Aviano, said 41 providers are registered in the network, but patients can be referred to others as well. They include staff at such places as the hospital in nearby Pordenone, as well as specialists in surrounding cities such as Udine, Trieste and Padova.

Only one Italian national, a part-time emergency medical technician, provides medical care on base. Italian doctors and nurses work at the base clinic in Vicenza, however, and Italians perform a number of support roles at the Navy&#8217;s hospital in Naples.

Italian civilians hold a variety of positions in virtually all operations at Aviano. Schaffrina said the biggest barrier in getting an Italian doctor to work in the medical facility on base would be finances. It&#8217;s cheaper to employ an active-duty doctor than it would be an Italian national.

One Italian doctor who regularly sees Americans is Leonardo Marini, a dermatologist who practices in Trieste and Portogruaro.

Marini said he enjoys treating Americans, because it provides a change of pace. In more ways than one.

Asked if there was a difference between American and Italian patients, Marini smiled.

After his Italian patients hear that, Marini might be a good candidate to be among the first to move on base himself.