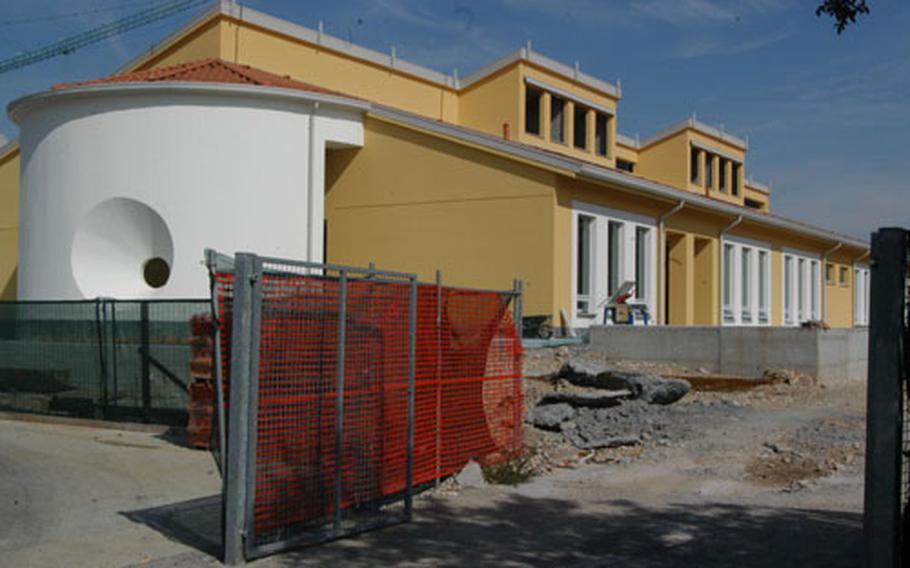 Aviano, the only major base in Europe that does not currently offer full-day kindergarten classes, will do so once this facility is completed. (Kent Harris / S&S)

AVIANO AIR BASE, Italy &#8212; When the bells start to ring next fall, kindergartners at Aviano should finally be able to join older pupils &#8212; and their peers across Europe &#8212; in attending school full time.

That&#8217;s if the kindergarten annex is completed on schedule.

Construction of the $2.9 million facility got off to a slow start, said Modesto Padilla, the project manager for U.S. Air Forces in Europe.

But Cooperativa Muratori Riuniti, the Italian contractor, is on target to be finished by March.

That means that kindergartners at Aviano will be in half-day classes this year.

Principal Melissa Klopfer said parents and school officials had hoped to be using the new facility this year.

The annex is part of the $550 million Aviano 2000 construction project, which is transforming almost all facilities that Americans use on base.

The project has been plagued by delays since its inception because of contractor bankruptcies, political wrangling with other NATO countries and a shortage of construction workers.

But Navy Lt. Bob Stiles, resident officer in charge of construction for the project, said it would be unfair to link the kindergarten project to the other delays.

In fact, Padilla said the crews have caught and overtaken several other projects that started earlier. He said work was about 75 percent completed.

That means the exterior &#8212; minus landscaping and finishing touches &#8212; is almost complete. But the inside is largely just a shell.

Stiles said CMR, based in Filo near Florence, has done work on several other projects on base, including the main gate to the flight line area and the fitness club.

Klopfer said it all looks good to her so far.

When completed, the facility will have nine classrooms, a teachers&#8217; lounge, a food-warming area and a playground outside. It will be separated from the adjacent youth center and the bus parking lot by a fence.

How many of those classrooms will initially be needed is not known.

&#8220;We really don&#8217;t know what to anticipate,&#8221; Klopfer said, adding that substituting six full-time classes for six half-time classes might not work.

There are likely parents who have enrolled their children into full-day child care or in similar Italian schools instead of half-day kindergarten, she said.

So the school will conduct early registration for kindergarten in January, hoping to get a better idea of how many pupils to expect.

But no matter how many sign up, the doors should be open when classes begin in the fall.