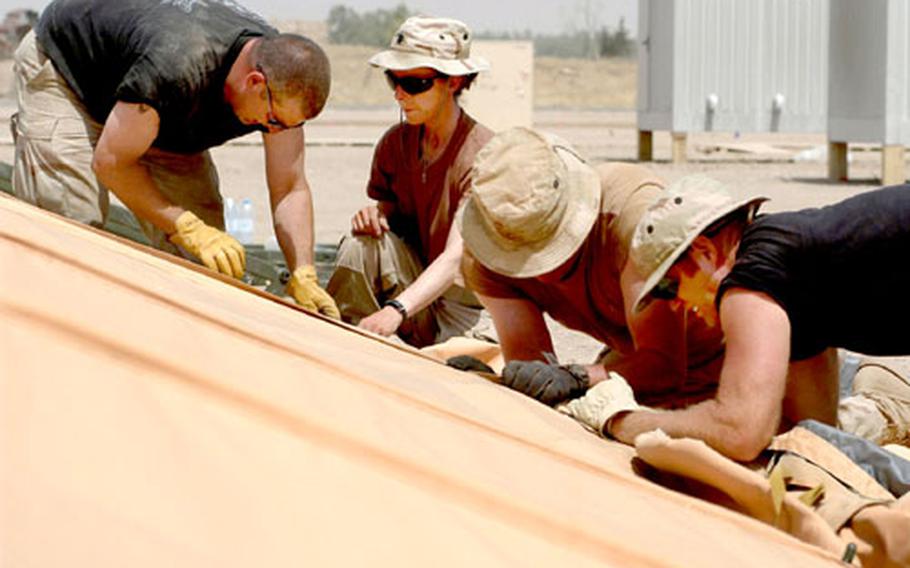 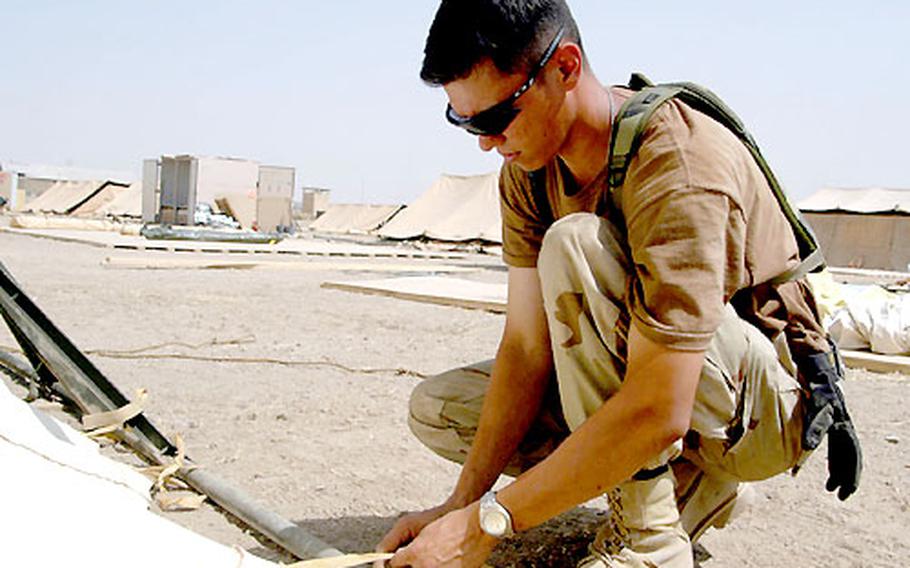 Airman 1st Class Darrel Dabeck ties down the side of a tent at Kirkuk airfield. (Michael Abrams / S&S) 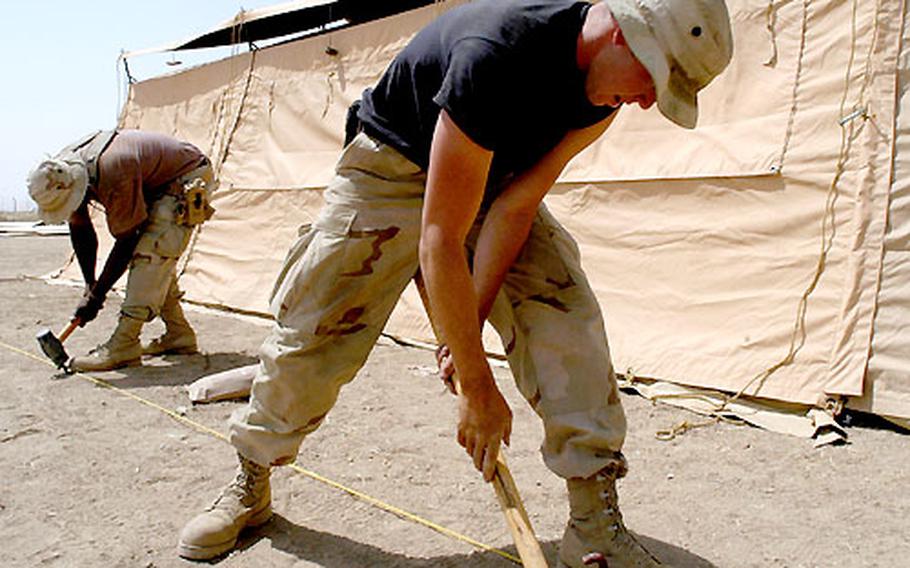 Airman 1st Class Tadd Wallace, right, and Master Sgt. Marshall Townsend hammer in stakes to support a tent they erected at Kirkuk airfield in Iraq. Members of the 506th Expeditionary Civil Engineering Squadron from McConnell Air Force Base in Wichita, Kan., and volunteers from other Air Force units stationed at the airfield are building a tent city with 194 billeting tents. (Michael Abrams / S&S)

KIRKUK, Iraq &#8212; For Senior Airman Stephanie Werner, there&#8217;s nothing better than playing in the dirt.

The 22-year-old engineer from the 31st Civil Engineering Squadron from Aviano Air Base in Italy &#8212; deployed to Iraq and attached to the 506th Expeditionary Civil Engineering Squadron &#8212; finds it satisfying to pitch in and help erect the first tent city for fellow airmen at Kirkuk airfield, even if it means working in the scorching 100-plus heat in a desert sand that is powder-fine.

Lt. Col. Tracey Walker, 44, commanding officer of the 506th, was leading by example on Monday. She was out in the heat, tugging tent lines and pitching canvas as the camel-tan tents went up one by one on the roughly 10 to 12 acres of pewter-colored dust.

Walker promises her crew they&#8217;ll be making a bit a history by converting an already-standing former Iraqi military command center on the airfield into a cantina. &#8220;It&#8217;ll be the only tent city with a two-story cantina,&#8221; Walker said.

And she has a goal of opening an airfield swimming pool by Saturday &#8212; May 31, in keeping with traditional timelines for &#8220;when swimming pools worldwide&#8221; welcome the first swimmers of the summer.

But for now, the main focus is on the tents that will house the airmen of the 506th Expeditionary Air Group. When done, the team will have erected 194 billeting tents that can accommodate some 2,200 airmen.

It will take civil engineers and volunteers six to eight days to erect the tent city, and a few more after that for the administrative, morale and welfare, and medical tents, said Master Sgt. Marshall Townsend, 34, with the 506th out of McConnell Air Force Base in Wichita, Kan.

Volunteers are welcomed, and several pitch in between 6 and 10 a.m., working around the heat of the day. &#8220;It gives everyone a sense of ownership,&#8221; Townsend said of the volunteers.

The civil engineer guys are on the project all day. Bottled water, and lots of it, is the order of the day to beat the scorching heat. As they labor, country and rock music take turns blaring from a Walkman CD player rigged to a couple of loud speakers.

The civil engineer crews don&#8217;t live in the tent cities they erect. When one&#8217;s done, they move on to another location in need of temporary housing.

He needs the distraction to keep from missing his daughter, who was 5 weeks old when he left her 98 days ago.

Wallace is one of the camp&#8217;s heroes: He&#8217;s the air conditioning guy, and each tent will have its own installed cooling unit.