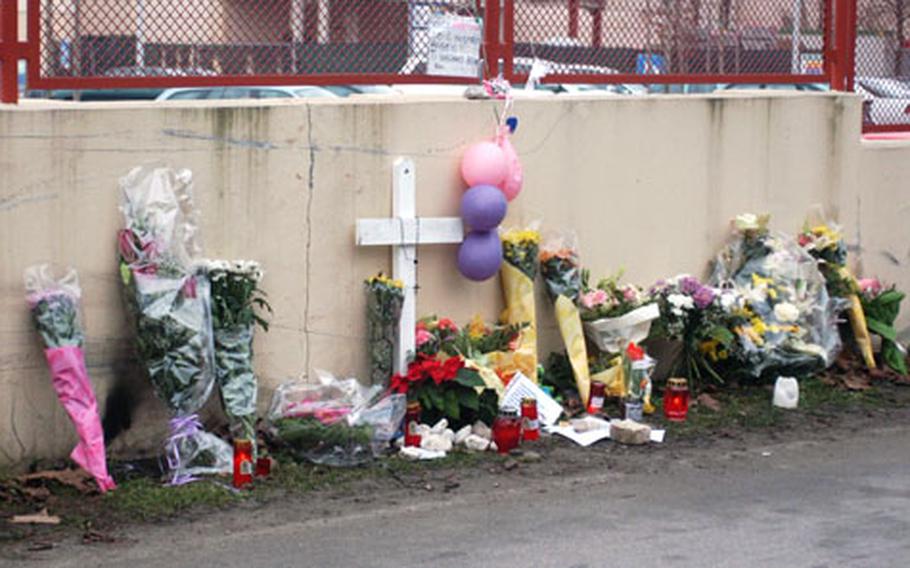 Flowers, candles and notes are left at the wall of Area 1 at Aviano Air Base, Italy, where Vanessa Rita Russo, an 18-year-old senior at Aviano High School, was killed in an automobile accident early Sunday morning. (Kent Harris / S&S)

AVIANO AIR BASE, Italy &#8212; An 18-year-old was remembered Friday for her smile. But when those talking about Vanessa Rita Russo during a memorial service tried to match that expression, the tears usually won out.

Principal Debra Johnson called her &#8220;a beautiful young woman who usually had a smile for everyone. I know Vanessa would want us to have more smiles than tears today.&#8221;

Vanessa, a senior who attended Italian schools before spending the last four years as a student at the American high school, died early Sunday morning after a single-vehicle accident right outside Area 1, about a block away from the school. Three American airmen also in the vehicle were hospitalized.

Johnson said school counselors and chaplains from the base offered support throughout the week to students and staff and would continue to be available as needed. Word quickly spread Sunday among students and staff. The school&#8217;s varsity volleyball team gathered to remember their teammate.

&#8220;As we began to reminisce, the tears often turned into smiles,&#8221; said Samantha Cordova, one of eight students who participated in the service.

But the tears were back again Friday. That was especially true for several educators who spoke and sat in the audience. Many of them had known Vanessa longer than her fellow students. Her father, Joseph, was a longtime elementary teacher before leaving the system last year. Her mother, Veronica, still lives in the area, and attended the service.

Coach and math teacher Ken McNeeley remembered taking her to the park to play with his daughter, Cheri, a senior at the school who later delivered the eulogy. &#8220;She had dark eyes and they glowed so bright when she was excited,&#8221; he said.

Dee Oleson, a school counselor, remembered her as &#8220;full of strength, compassion and grace. More than I think she even realized she had.&#8221;

Pam Hillestad, who coached her on the volleyball team, talked about the struggles that Vanessa went through to learn English and adjust to a different atmosphere at school. She said after initial doubts about trying out for volleyball, she played all four years.