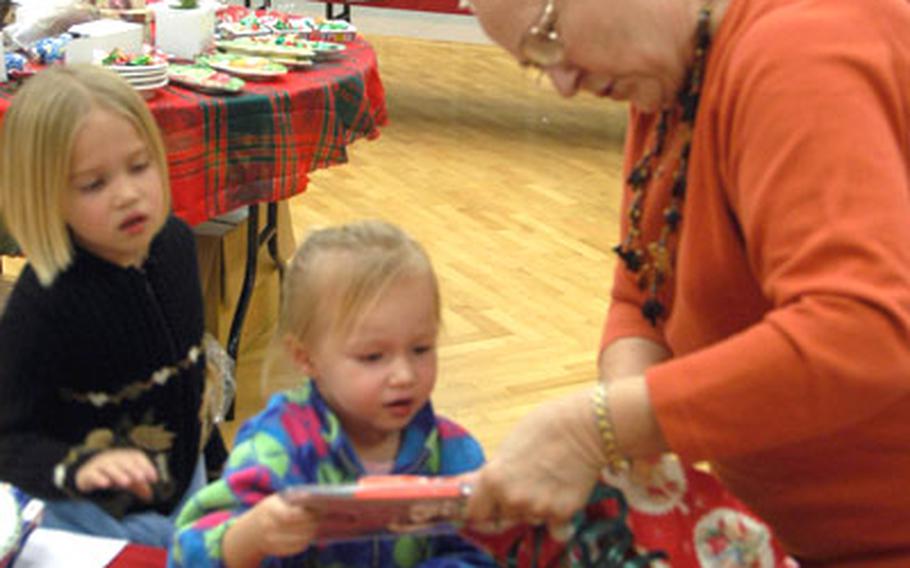 Volunteer Sharon Sansone shows a potential gift to Paisley Zika, 3, on Monday at the Christmas Cottage on Aviano Air Base, Italy, as her older sister, Preslie, 7, watches. Hundreds of kids at Aviano shopped for their parents, while the parents waited in the lobby. (Kent Harris / S&S)

AVIANO AIR BASE, Italy &#8212; A few hundred Air Force parents should find surprises under the Christmas tree this year.

That&#8217;s because their kids played Santa on Monday and Tuesday at the base community center. More than 350 children were expected to pick out gifts at the Christmas Cottage.

It&#8217;s the fifth year the Aviano Officer and Civilian Spouses Club has sponsored the event, which is more popular than ever, according to chairperson Jana McKinley. All proceeds go to Project Cheer, a USAFE program geared toward single airmen.

Gifts were donated or purchased from proceeds generated by the group&#8217;s fall bazaar. Kids up to 12 years old were allowed to tour through a room of selections and choose a single gift for Mom and Dad by handing over a 25-cent donation. Parents waited outside in the lobby area while the kids got some help from adult volunteers.

Patti Busque, who was among those playing gift shepherd, said not many of the young shoppers appeared to come in hunting for a specific item. So they chose from assorted gifts targeting Mom and items specifically geared for Dad.

Spoiler alert: There were no ties for sale.

Jessica Zika patiently waited for her daughters Preslie, 7, and Paisley, 3, to make their selections. She smiled when asked if it was nice to have a few minutes to spend alone.

She said she had no idea what her daughters would pick out for her or her husband, Senior Airman Simon Zika.