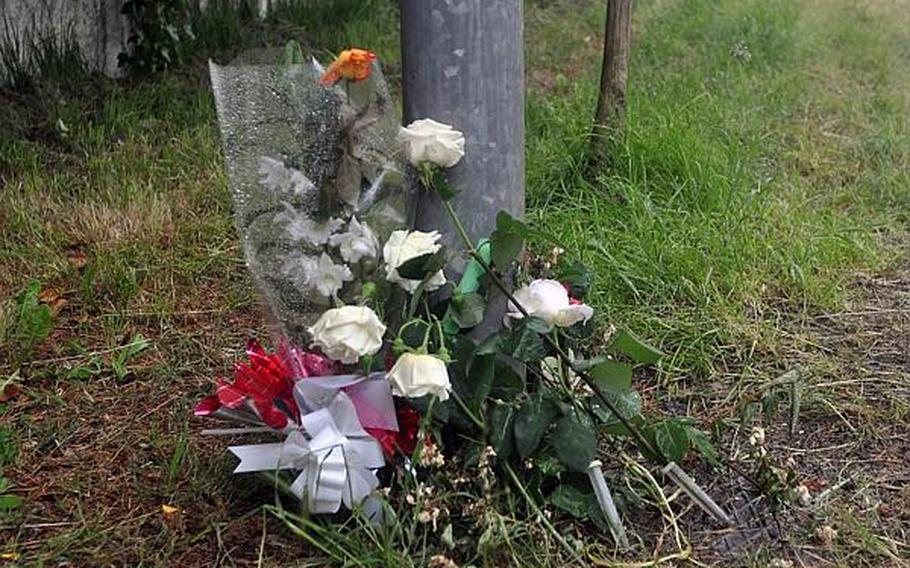 Flowers left along the mountain highway where an Italian teen was killed when his vehicle was struck by a car driven by a U.S. Airman stationed at Aviano, Italy, according to local police. (Jason Duhr/Stars and Stripes)

AVIANO AIR BASE, Italy — An airman assigned to Aviano was involved in a traffic collision Tuesday that resulted in the death of an Italian teen, Italian police and U.S. military officials said.

The airman was driving to work around 7:30 a.m. on highway SP-29 — commonly referred to as the “mountain highway” by Americans — near the town of Caneva, southwest of Aviano, when she crashed into the rear of a miniquad all-terrain vehicle driven by a 16-year-old Italian, who was making a left turn, according to an Italian police official.

“The boy was thrown from the quad, but we are waiting on the autopsy and more details to determine if [the airman] was speeding,” said the police official, who declined to provide his name because he is not authorized to speak to the media.

The 31st Fighter Wing has offered its full support to authorities investigating the collision and sympathies to the teen’s family, said Maj. Erick Saks, chief of public affairs.

“We are all deeply saddened by the loss of this young man,” Brig. Gen. Scott J. Zobrist, the wing commander, was quoted as saying in a release.

“Fortunately, the young woman involved in the incident was not physically injured,” Zobrist said of the airman.

The prosecutor’s office in Pordenone will determine if charges are to be filed.