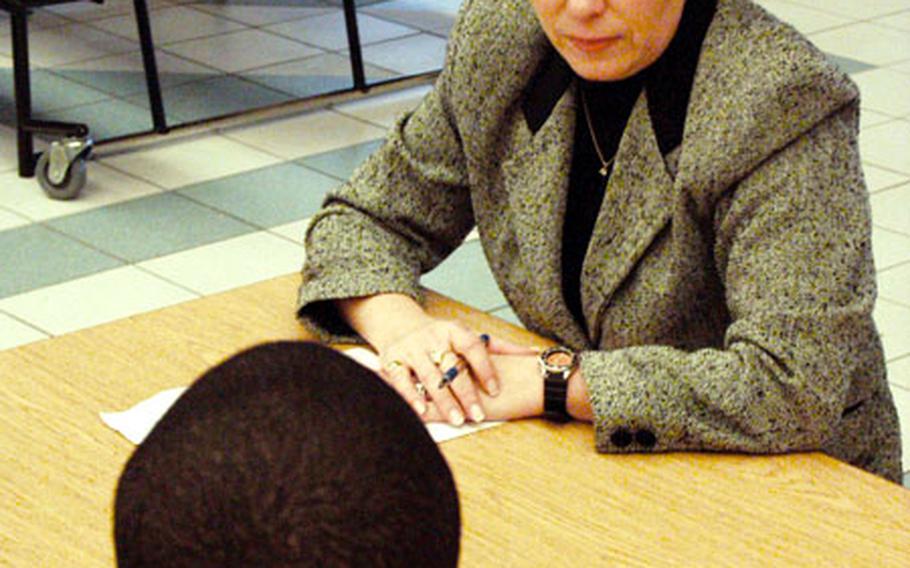 Susan Page, assistant principal at Aviano High School, helps a student with algebra during a lunch-duty shift earlier this week. Page was selected as the top assistant principal for middle and high schools by the Department of Defense Education Activity. (Kent Harris / S&S)

Growing up as the daughter of a sailor, she attended school while her dad went on long deployments. While married to an active-duty airman, she taught in the system. And, for the last seven years, she&#8217;s been an administrator.

Her perspective is also shaped by being the mother of DODDS pupils. She has three daughters attending classes at Aviano at all three levels &#8212; elementary, middle and high schools.

Page said the students at the school, as well as their parents and the teachers who work there, all share her honor.

Principal Doug McEnery said that no one gets such an honor without a reason, though.

McEnery and Page also shared a classroom at Aviano for several years. Page taught math and McEnery taught English in a college prep class. This year, Page teaches an algebra lab every day before lunch.

The class isn&#8217;t necessarily a part of her duties as assistant principal. But she said she didn&#8217;t have to have her arm twisted to take it. In fact, while teaching at schools in the States and DODDS facilities in Naples, Italy, and Bad Kreuznach, Germany, she struggled with the idea of giving up teaching to take on administrative duties.

Like many teachers, she&#8217;s collected boxes and boxes of material over the years, and &#8220;it took several years before I was able to depart with all the teaching stuff.&#8221;

Page said she became an administrator because she thought that she could have a greater impact on more students than staying in a single classroom.

She said she hopes to stay in her current position through the end of the next school year &#8212; when her oldest daughter graduates &#8212; and eventually try running a school.

Page says she&#8217;s not sure if there was a single reason she was chosen as one of the top 52 assistant principals in the American education system (all 50 states plus DODEA and the District of Columbia). But she appreciates the recognition.