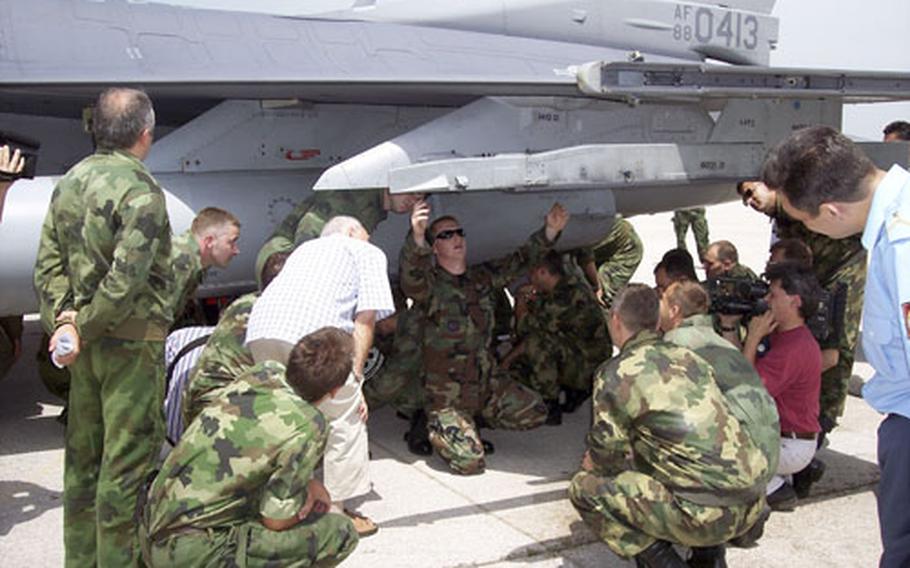 Staff Sgt. Kyle Bryant, based in Aviano, briefs his Serbian counterparts on the F-16. Bryant was in Serbia as part of a friendship exchange. (U.S. Air Force photo)

Staff Sgt. Kyle Bryant, based in Aviano, briefs his Serbian counterparts on the F-16. Bryant was in Serbia as part of a friendship exchange. (U.S. Air Force photo) 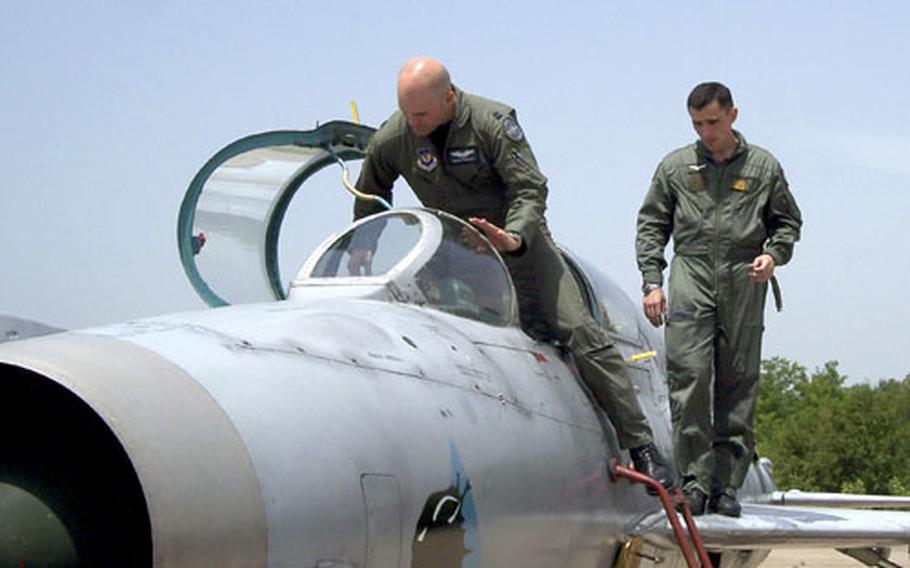 Capt. Brian Perkins climbs into a MiG-21 as Capt. Novak Djordjijevic stands by to brief him. (U.S. Air Force photo)

Staff Sgt. Anthony Kasper was an airman 1st class at Aviano Air Base in 1999 when it was one of the main launching pads in the air campaign against Yugoslavia.

Last week, he was one of eight airmen from Aviano to visit Batajnica air base near Belgrade, Serbia, as part of a friendship exchange. Maj. Andrew Willis and Capt. Brian Perkins flew in a pair of F-16s on Thursday &#8212; the first time American military planes touched down in the country since the Yugoslav pullout from Kosovo.

During the two days the American jets were on the ground, airmen from both countries got the chance to check out the aircraft from the other country. The Serbs field MiG-21s and MiG-29s.

He said it was difficult to communicate with his Serbian counterparts without translators, though they appeared to know their way around their aircraft.

Airmen from the two countries were joined by a few politicians.

Michael C. Polt, the U.S. ambassador in Belgrade, called the meeting &#8220;a most welcome sight and an appropriate reflection on our long history of friendship. We were close allies in two world wars.&#8221;

Kasper said he was a member of the 555th Fighter Squadron at Aviano during the air war. The squadron commander&#8217;s plane was shot down. The pilot was later rescued, but the Serbs have the tail and other parts of the plane in a museum that the airmen visited.

In remarks posted on the embassy&#8217;s Web site, Polt said the two countries have grown closer since the ouster of former leader Slobodan Milosevic in 2000.

&#8220;Among our most significant recent achievements in improving our security relations are the just completed negotiations on a Status of Forces Agreement, or SOFA,&#8221; he is quoted as saying. &#8220;We hope to sign the agreement in the coming weeks.&#8221;

U.S. forces are planning to train with some Serbian forces in the near future; a Serbian military delegation recently visited the United States.

Serbian Defense Minister Zoran Stankovic was quoted by the Tanjug news agency as saying the visit was part of a series of planned exchanges between the two countries. He said his country wants to join NATO and the European Union.