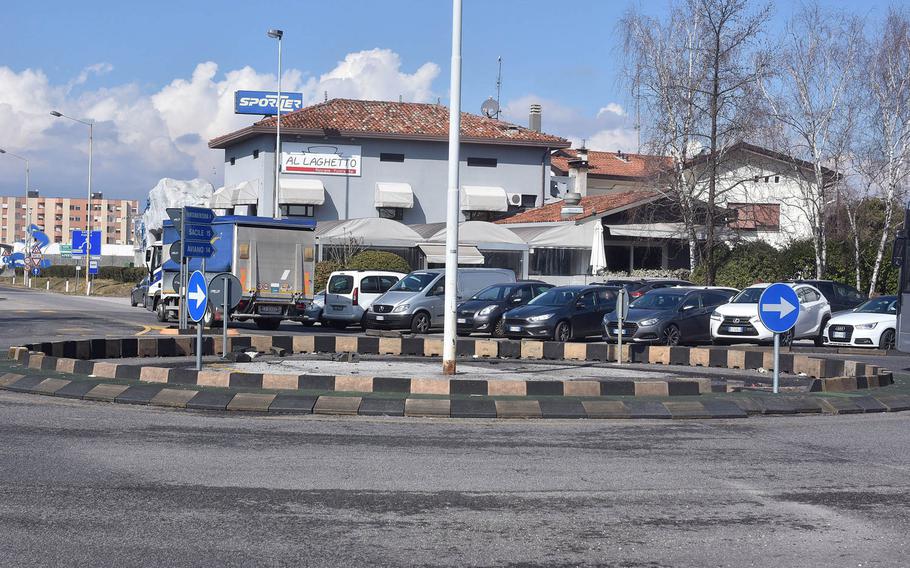 Buy Photo
Little evidence is left at the traffic circle on the SS-13 (Via Aquileia) where a U.S. servicemember reportedly lost control of his vehicle in the early morning hours of Feb. 28, 2018, and struck four cars parked in the lot that serves the Al Laghetto bar and restaurant in Pordenone, Italy. (Kent Harris/Stars and Stripes)

AVIANO, Italy — Two Aviano airmen from the 31st Fighter Wing have been charged for their roles in a hit-and-run accident last week.

A 21-year-old American male assigned to the base caused the accident at about 5 a.m. on Feb. 28, on the SS-13 highway near the Al Laghetto bar and restaurant, according to a statement issued Monday by Mauro Dorigo, chief inspector of the Pordenone police department.

Police said the driver’s BMW 330 approached a traffic circle at high speed, lost control and hit four cars in the parking lot. A person in the back seat of one of the four cars sustained minor injuries.

The driver exited the car along with a female passenger and made a phone call, according to a report by the Il Gazzettino newspaper.

Another car shortly arrived and the pair left, leaving the BMW — with information identifying the owner inside — before police arrived, according to the newspaper. A witness who tried to stop the car from leaving suffered minor injuries.

Police are charging the driver of a second vehicle, another 21-year-old American, with aiding and abetting, fraudulent misrepresentation by a private citizen and intentional bodily harm, according to the statement. Neither of the Americans were further identified.

The U.S. will be seeking jurisdiction in the cases, said Capt. Tom Barger, 31st Fighter Wing spokesman. He confirmed Thursday that the airmen charged were assigned to the wing and said he could provide no further information.

About a month earlier and about 11 miles away in the city of Sacile, another American, identified by Italian authorities only by the initials FAG, was found asleep at the wheel of his car at a stoplight on Viale Lacchin.

The American servicemember failed a breath alcohol test and his car and driver’s license were impounded, according to a report by an Italian Carabinieri office located near the incident. He is accused of having a blood alcohol level of more than .15 — one media report listed it as .225 — an offense that warrants a prison term in Italy.

The U.S. side asked for and obtained jurisdiction in that case, Italian authorities said.

Valentina Lehman contributed to this report.