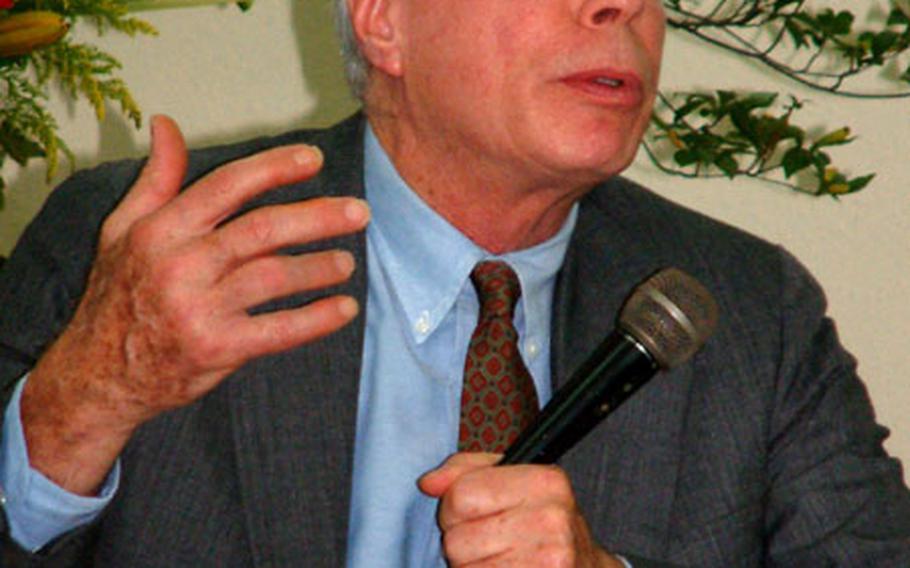 Okinawa has been treated shamefully by the United States since the first American stepped ashore in 1853, claims American author George Feife during a speech Thursday at a Naha high school. (David Allen / S&S)

NAHA, Okinawa &#8212; Author George Feifer says Okinawa has been treated shamefully by the United States since the first American stepped ashore in 1853.

It was a behavior that rejected the culture of the peaceful Okinawans who had asked Commodore Matthew Perry not to anchor his &#8220;Black Fleet&#8221; in Okinawan waters, said Feifer, author of &#8220;Tennozan: The Battle of Okinawa and the Atomic Bomb,&#8221; during a speech here Thursday night.

Feifer spoke to a crowd of 250 people Thursday night at Okinawa Shogaku High School in Naha, which is celebrating its 20th anniversary. Part of his talk focused on the importance of Okinawa students studying abroad so that they can understand different cultures. It&#8217;s something few Americans do, Feifer said.

When Perry&#8217;s ships arrived in in May 1853 to establish a coal station and supply port, the regent at Shuri Castle requested the commodore and his men remain on their ships.

&#8220;There was all kinds of misbehavior, including the rape of an Okinawan woman by an American sailor.&#8221;

&#8220;To sum it up, the door was locked, then owner of the house said please do not come in, and Perry bashed the door down because he had guns and the Okinawans had none,&#8221; Feifer said.

He said Perry&#8217;s actions were meant to scare the Japanese government in Edo, now Tokyo, where he was bound in his quest to open Japan to trade.

Perry did what Gen. Douglas MacArthur proposed 112 years later after the 83-day Battle of Okinawa, which left the island in ruins with a third of the civilian population dead, Feifer said.

Feifer urged Okinawans to speak about their history of mistreatment by the United States.

&#8220;The world needs to know about the Okinawan way. Not the way of eating healthy and living to a ripe old age, but the way of tolerance, compromise, rejection of violence and maintaining some sort of civilized behavior,&#8221; Feifer said. &#8220;We need your standards and, frankly, I am a bit disappointed in your failure to speak out.&#8221;