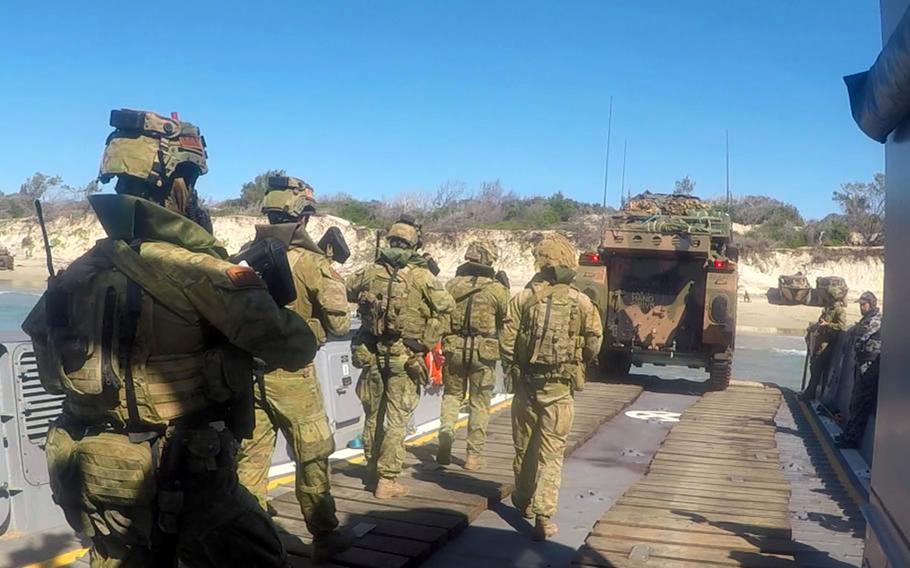 Australian soldiers disembark a landing transport vehicle for an amphibious assault on a beach in northeastern Australia, Tuesday, July 16, 2019. A light armored vehicle leads the way. (Caitlin Doornbos/Stars and Stripes)

Australian soldiers disembark a landing transport vehicle for an amphibious assault on a beach in northeastern Australia, Tuesday, July 16, 2019. A light armored vehicle leads the way. (Caitlin Doornbos/Stars and Stripes) 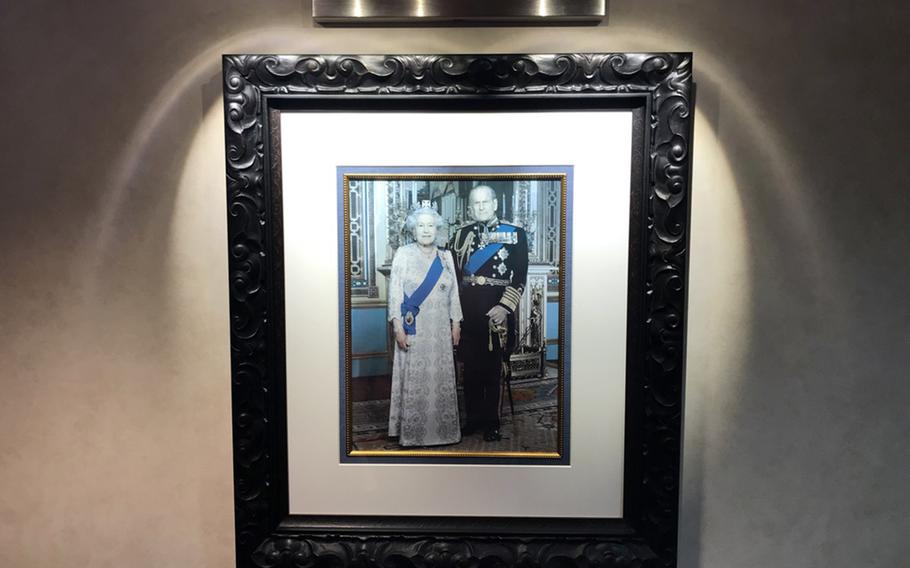 A photo of the Queen Elizabeth II and Prince Philip Mountbatten hangs in the officer's lounge of the HMAS Adelaide, Tuesday, July 16, 2019. (Caitlin Doornbos/Stars and Stripes) 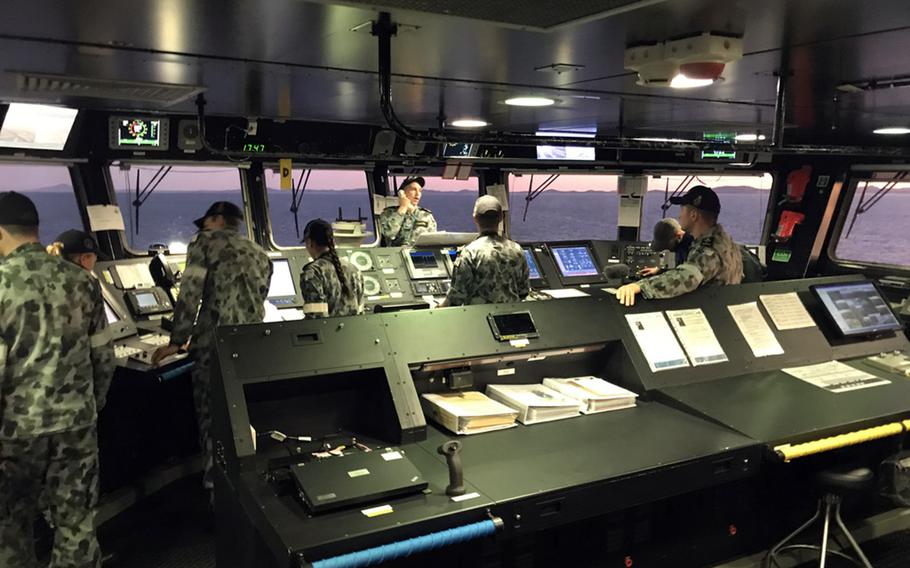 Australian sailors stand watch on the bridge of the HMAS Adelaide in the Coral Sea on Monday, July 15, 2019, during the Talisman Sabre exercise. (Caitlin Doornbos/Stars and Stripes) 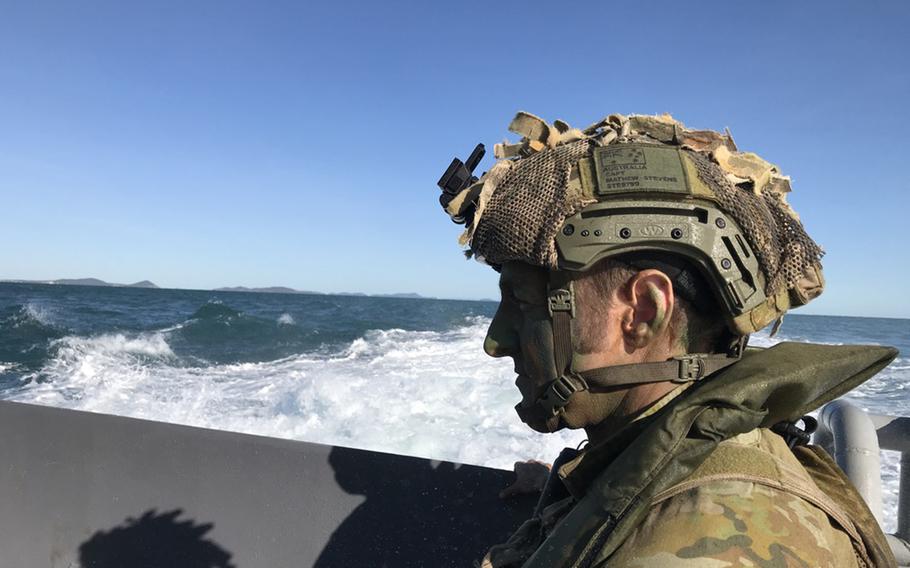 Capt. Matthew Stevens of the Australian army's 7th Infantry Regiment stands aboard a loading transport dock in the Coral Sea as soldiers prepare to practice an amphibious landing and beach assault during Talisman Sabre in Australia, Tuesday, July 16, 2019. (Caitlin Doornbos/Stars and Stripes)

Their mission: Liberate the fictional country of Legais from enemy forces through an amphibious assault, seizing an airfield and port.

Tuesday marked the first time Australia has led a beach assault since World War II, with the help of U.S., New Zealand, United Kingdom and Japan forces. The practice assault was the start of the peak action for Talisman Sabre, a biennial military exercise led by U.S. and Australian forces off the eastern coast of Queensland, Australia.

The amphibious landing practice was one of the most important portions of the monthlong exercise, Maj. Gen. Roger Noble, deputy chief of joint operations for the Australian Defence Force, said in a statement Wednesday.

“The relationship between Australian and the United States is the cornerstone of our regional stability. Practicing [working together] builds our flexibility to achieve our shared aims,” he said. “A credible amphibious capability significantly broadens the options for Australia and the United States to fulfil these requirements.”

Unlike the U.S., the Australian military does not have a dedicated amphibious force. Instead, the Australian army rotates soldiers through land and sea postings, and the Australian navy is in charge of sailing them close to the beach for assaults.

“This is completely foreign to almost all of us,” said Capt. Matthew Stevens of the Royal Australian Army’s 7th Infantry Regiment, who led the group of soldiers on the amphibious landing craft Tuesday.

Also on board the transport dock were two light armored vehicles, each of which, despite the name, weighs 14 tons. It was the first time the Australians used these eight-wheeled amphibious reconnaissance vehicles in Talisman Sabre, Stevens said.

“It’s an exciting opportunity to work in a joint environment,” Stevens said aboard the transport dock as it pulled away from the HMAS Adelaide. “This is the only time in our careers to be able to do this.”

The ride from the Adelaide to the beach took about 2 ½ hours over choppy waters. The transport dock sailed alongside five others over the volatile Coral Sea, each wave unsteadying the soldiers’ feet and spraying saltwater over them and their equipment.

Though the experience recalled scenes from the 1944 Normandy landings, the soldiers were almost too calm. Two junior officers rolled their own cigarettes, leaning against the sides of the transport dock, while other soldiers napped in the sunshine, their chins resting on the butts of their rifles.

Stevens said that though the Talisman Sabre exercise was meant to practice combat skills, the Australian army is more likely to use amphibious landing in a humanitarian-assistance role.

“Unlike the events of D-Day, the key difference is that this is a permissive or semi-permissive environment,” Stevens said. “In our modern context, our primary role in our operations is a humanitarian environment.”

As the landing dock approached the coast, five helicopters swirled overhead, conducting reconnaissance ahead of the arriving soldiers and Marines.

As the first wave of Americans and Japanese landed on the beach, a smoke screen was deployed to obscure the imagined enemy’s vision. Soon after, Stevens’ landing dock cruised into the beach, the vehicles were unloaded and his soldiers bailed out, trudging through waist-deep water to reach the shore.

Once on land, Australian soldiers watched in awe as two Japanese air-cushioned landing craft drove ashore, with one servicemember exclaiming, “that was worth the trip.” The U.S. and Japan are the only nations to use the amphibious hovercraft that can push across water and sand at more than 70 knots at full speed.

“I’m really happy with how it turned out,” Sieber said. “The team came together from all three nations and were able to operate great and interoperable throughout the whole landing.”

Talisman Sabre runs until early August. Altogether, 34,000 military personnel from the U.S., Australia, Japan, Canada, New Zealand and the U.K. are participating, with delegations from South Korea and India observing.