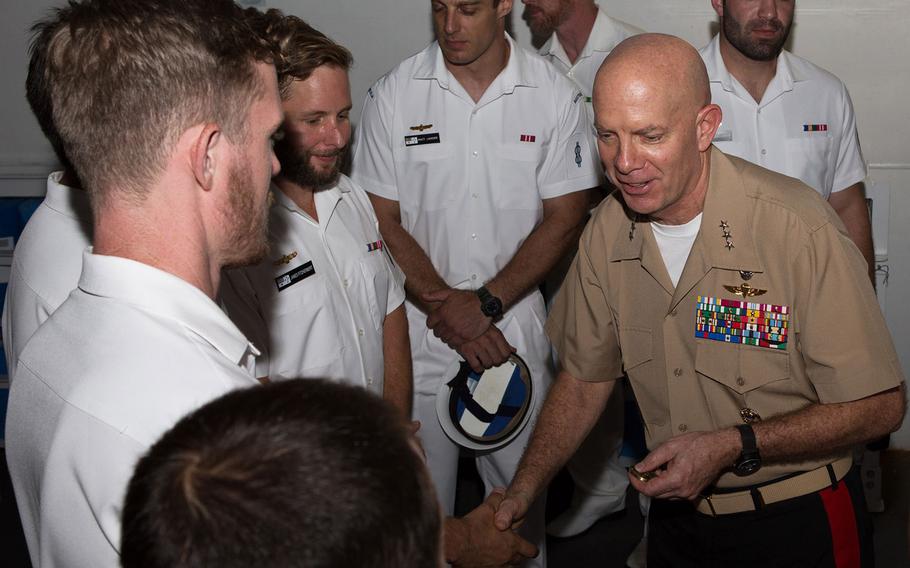 Australian troops who helped salvage an MV-22 Osprey after a deadly crash last summer off the country’s eastern coast have been awarded a Meritorious Unit Commendation.

“The United States Meritorious Unit Commendation is a great honor for our servicemembers and the Australian public can be proud of what our people achieved,” Australian Defence Minister Marise Payne said in a statement.

The crash, which took the lives of Capt. Benjamin Cross, Cpl. Nathaniel Ordway and Lance Cpl. Ruben Velasco, happened just after 4 p.m. Aug. 5 when the helicopter-plane hybrid from Marine Medium Tiltrotor Squadron 265 left the deck of the amphibious-assault ship USS Bonhomme Richard and attempted to land on the amphibious-transport dock USS Green Bay. The ships had been operating off the Australian coast as a part of the massive bilateral training exercise Talisman Saber 2017, which wrapped up at the end of July.

The Osprey reportedly crashed into the Green Bay’s deck and slid into the sea, trapping the Marines inside. Twenty-three others were rescued.

Australia immediately sent divers and recovery ships to the scene and, a day later, divers from the HMAS Melville found the wreckage 165 feet below in the Coral Sea.

The Marine Corps announced Aug. 25 that the Marines’ bodies had been recovered.

“The Australian forces volunteered their help before we could even ask, demonstrating the deep ties and enduring nature of the alliance between our two countries,” Navy Capt. Jeff Davis, a Pentagon spokesman, said shortly after recovery efforts began.