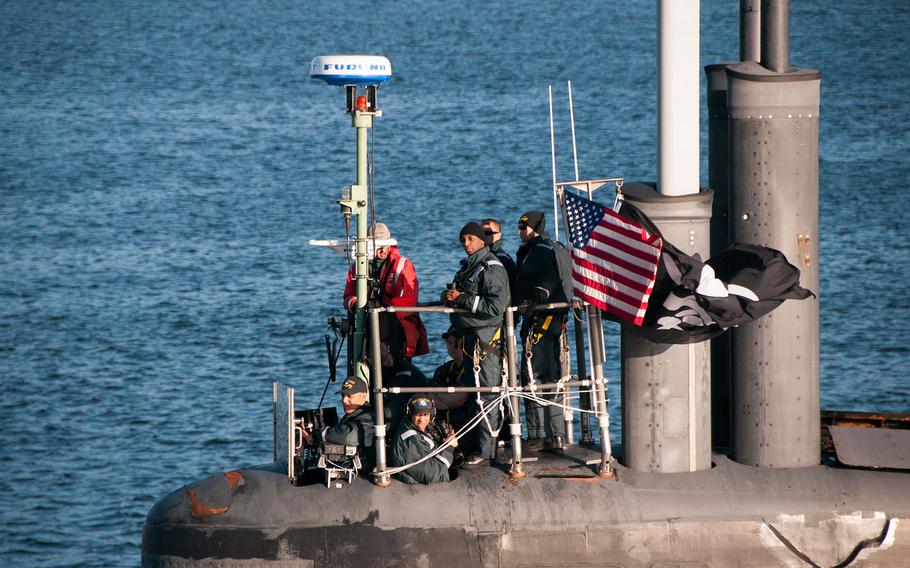 An F-14A Tomcat from Fighter Squadron 84 is pictured in this undated photo from the U.S. Navy. The squadron is nicknamed the Jolly Rogers. (Courtesy of the U.S. Navy) The U.S. military doesn’t appear to be following Australia’s lead in banning so-called “death symbols” such as the Jolly Roger, the Punisher, the Phantom, Spartans and the Grim Reaper.

Soldiers Down Under can no longer use such imagery on things like informal patches and badges because of an order issued recently by Lt. Gen. Angus Campbell, the incoming Australian Defense Force chief who now heads the nation’s army.

Titled “Use of Symbols in Army,” the directive is aimed at symbols that are “at odds with Army’s values and the ethical force we seek to build and sustain.”

The skull and crossbones is linked with “maritime outlaws and murderers,” the comic book characters the Phantom and the Punisher promote “vigilantes,” Spartans encouraged “extreme militarism,” and the Grim Reaper is “the bringer of death,” according to the order.

In his directive, Campbell said “such symbology is never presented as ill-intentioned and plays to much of modern popular culture, but it is always ill-considered and implicitly encourages the inculcation of an arrogant hubris and general disregard for the most serious responsibility of our profession, the legitimate and discriminate taking of life.”

The order asked commanders to “take immediate action to explain and remove such symbology/iconography in any and all formal or informal use within our Army.”

Former sergeant Justin Huggett, who received Australia’s third-highest award for battlefield valor after leading a counter-attack against Taliban militants who had ambushed an Afghan army patrol in 2009, penned an open letter to Campbell, under whom he once served.

“Any decision that you make, sir, that denigrates the morale of the enlisted, flows on and denigrates combat power,” Huggett wrote.

He went on to list many symbols used by army groups, including his former mortar platoon, which used the Grim Reaper as an emblem with the motto: “dealers in death.” He noted other units “proudly” displayed “the Immortals, the Rebels, the Body Snatchers, the Dirty Dozen and the Morticians.”

He pointed out that Australia’s Infantry Combat Badge, an equivalent to the U.S. Army’s Combat Infantry Badge, was “based around the bayonet, the most feared and gruesome up-close-and-personal weapon on the battlefield.”

Some of those opposed to the ban have been circulating a photo of Cameron Baird, an Australian commando who was posthumously awarded the Victoria Cross for battlefield gallantry in 2013, with his face painted into The Punisher’s emblem.

On April 15, Campbell’s Twitter account retweeted a congratulatory message to Australian Army cadets who won an award while competing at the U.S. Military Academy at West Point. It included a photo of the U.S. award, featuring the USMA’s crest — a Spartan helmet pierced with a sword — imagery his order explicitly bans.

Campbell amended the directive Wednesday to allow commanders to seek exemptions to the ban, which he had previously stated he was “adamant” about being “right for the Army.”

‘We’ve done it for years’ The Pentagon, which didn’t respond to inquiries about the issue, hasn’t stated an intention to follow suit with a similar ban.

Army official emblems and nicknames are generally reserved for battalion-sized or larger units and don’t usually include the sort of symbols targeted by the Australians.

In smaller units, however, unofficial symbols that would fall under Australia’s ban are commonplace.

At Camp Buehring, Kuwait, units frequently paint emblems onto T-wall barriers before their departure to Iraq. The artwork frequently includes symbols and sayings covered under the Australian ban.

A yearbook detailing a deployment to Iraq by 2nd Battalion, 3rd Infantry Regiment notes a Spartan platoon, a Marauder platoon and a Punisher platoon and includes images of the Grim Reaper, skulls, Spartan helmets and the Punisher skull logo.

In other services, so-called death symbols are featured on some official emblems. Marine reconnaissance battalions incorporate the skull and crossbones in their unit symbols, as do many aviation squadrons in the Air Force, Navy and Marine Corps.

Navy submarines have also been known to fly the Jolly Roger when pulling into port, as the fast-attack submarine USS Jimmy Carter was observed doing in 2017.

Air Force Tech. Sgt. Orlando May, of Los Angeles, who was on temporary duty Friday at Yokota Air Base in western Tokyo, said he wouldn’t like to see the U.S. military ban such symbols.

May showed off an image on his cellphone of the emblem that his Office of Special Investigations unit used in Afghanistan – a dark character clutching a pistol while wearing a fedora, trench coat and red scarf.

“There’s a lot of heritage in it and esprit de corps,” he said. “We’ve done it for years.”