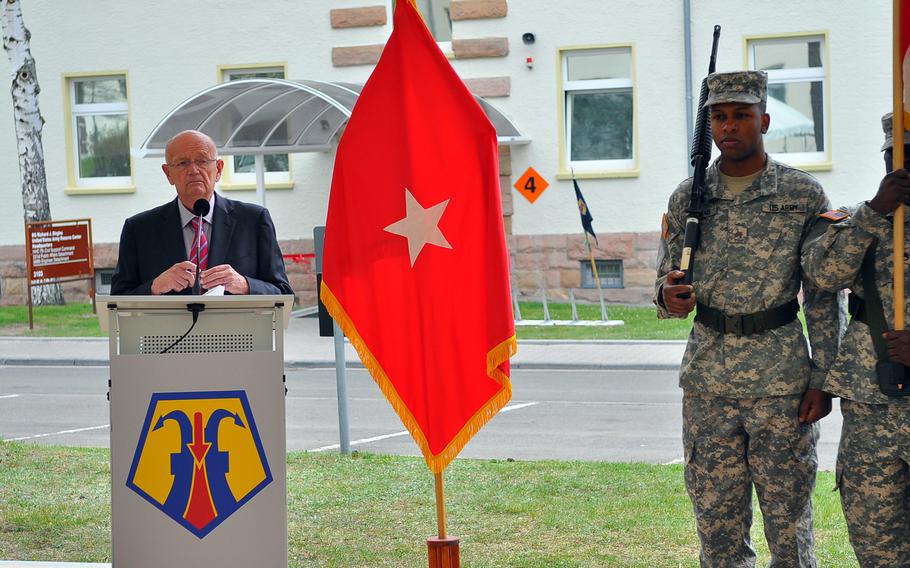 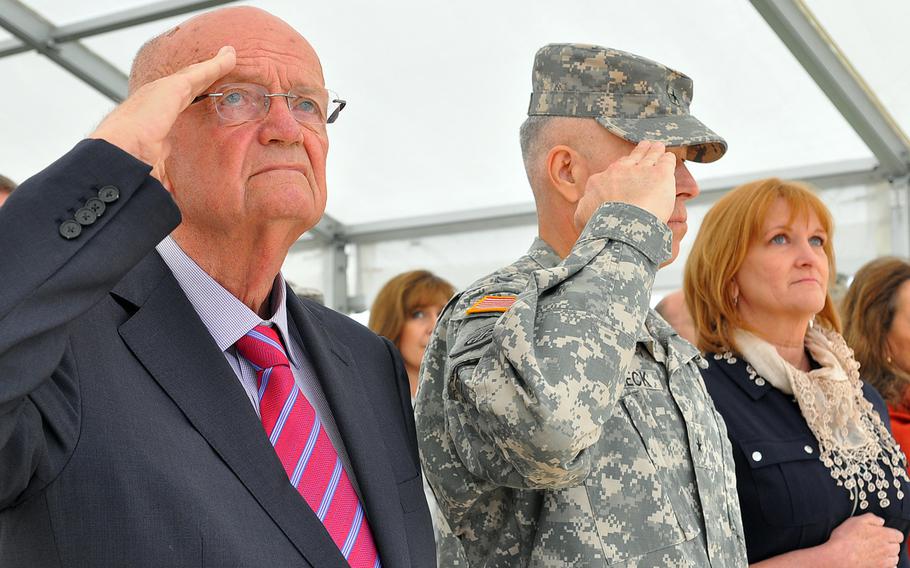 Buy Photo
Retired Army Gen. Gordon Sullivan salutes during a building dedication ceremony April 17, 2015, at Daenner Kaserne in Kaiserslautern, Germany. Gordon, the president of the Association of the U.S. Army, is worried that sequestration could trim Army rolls too far. (Jennifer H. Svan/Stars and Stripes)

KAISERSLAUTERN, Germany — Gordon Sullivan has been around the block a time or two. Enough so that he’s troubled by the Army’s plan for deep force cuts, coupled by the possibility of sequestration-level federal budget reductions in 2016, at a time of increasing global security threats.

Sullivan — a retired Army general who as president of the Association of the United States Army goes to bat for soldiers on Capitol Hill — thinks servicemembers ought to be better compensated. He’s yet to formulate an opinion on a proposed 401(k)-style pension plan for troops.

Of the current manpower reductions, Sullivan said, “This is a fast track. We’re going in the wrong direction.”

While Army leaders say they intend to slow down the pace of the current drawdown, they are still eyeing an eventual end-strength of 450,000 active-duty soldiers. That would be the Army’s smallest size since about 1940, before the U.S. entered World War II. At the end of fiscal 2014, the Army’s active ranks numbered 508,000 soldiers.

Sullivan said he thinks the active Army should go no lower than 500,000, and the same for the Army guard and reserve. “I cannot believe that the United States of America cannot afford a million men and women” in the Army uniform, he said. “I think they’re cutting it too much.”

With 10,000 troops in Afghanistan and a simmering conflict with the Islamic State group in Iraq, among other continuing and emerging problems, “we are hardly at peace,” Sullivan said.

Sullivan was in Kaiserslautern for a ceremony at Daenner Kaserne to name the 7th Civil Support Command headquarters after Brig. Gen. Richard J. Dirgins. Dirgins, Sullivan’s college roommate at Norwich University in Vermont, led the former 7th U.S. Army Reserve Command, based at the time in Schwetzingen, for MORE THAN six years. He died about six months after he retired, in January 1995.Sullivan’s 77 years belie his feisty spirit and seemingly tireless work ethic. He’s led AUSA, a private, nonprofit organization that supports the interests of U.S. soldiers, since 1998, several years after capping a 36-year military career with a turn as the Army chief of staff under former President Bill Clinton.

“I can’t think of another way to have served my country than to be a soldier,” he said in the interview. “This is what I love.”

Sullivan was critical of lawmakers who would allow another round of arbitrary, across-the-board federal budget cuts known as sequestration to happen in 2016.

“Sequestration is too much,” he said. “I think it’s irresponsible. They (politicians) said it wouldn’t happen (in fiscal 2014) — it did.

“Frankly, I think it’s dysfunctional in today’s world. The threats are going up. You can see it in eastern Ukraine, ISIS … throughout Africa, throughout the Middle East, and we’re taking it down and tying the hands of” U.S. military leaders.

“We have many people who sit back and just say, ‘it didn’t happen on my watch, I don’t know,’” Sullivan said. “Somebody has to be responsible.”

“The 401(k) is fine except it’s a risk that’s being placed because the stock market isn’t always up,” he said. “It’s very complicated and I haven’t seen the analysis from the Department of Defense and the (Joint) chiefs, and I’d like to see that.”

He said he thinks troops deserve an annual raise pegged to the consumer price index of 2.3 percent.

“I think the question is how do we compensate a professional force which is being asked to do more in combat and in quasi combat, like down in Africa with Ebola or whatever,” he said.