Audie Murphy is back with his old outfit 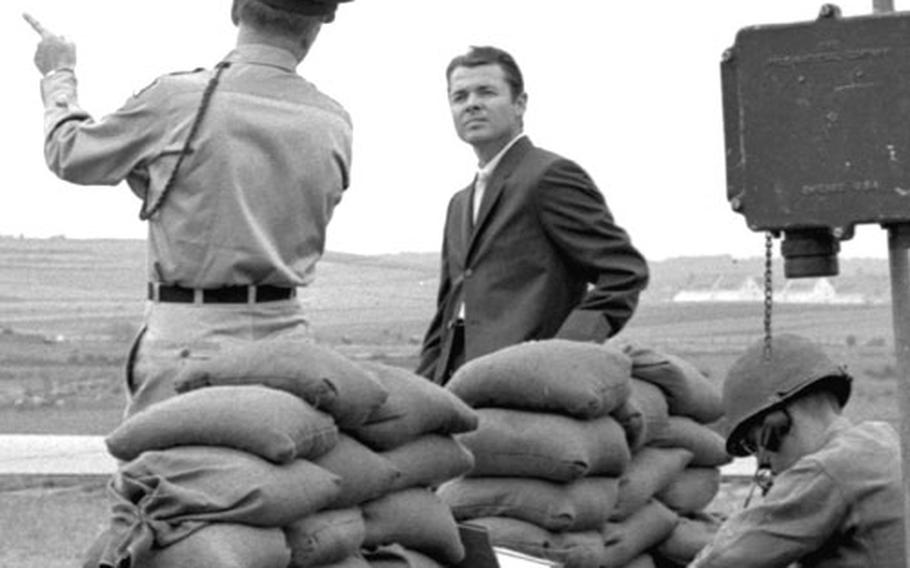 Audie Murphy gets some instructions on the set at Würzburg. (Dale Whitney/Stars and Stripes)

Audie Murphy gets some instructions on the set at Würzburg. (Dale Whitney/Stars and Stripes) 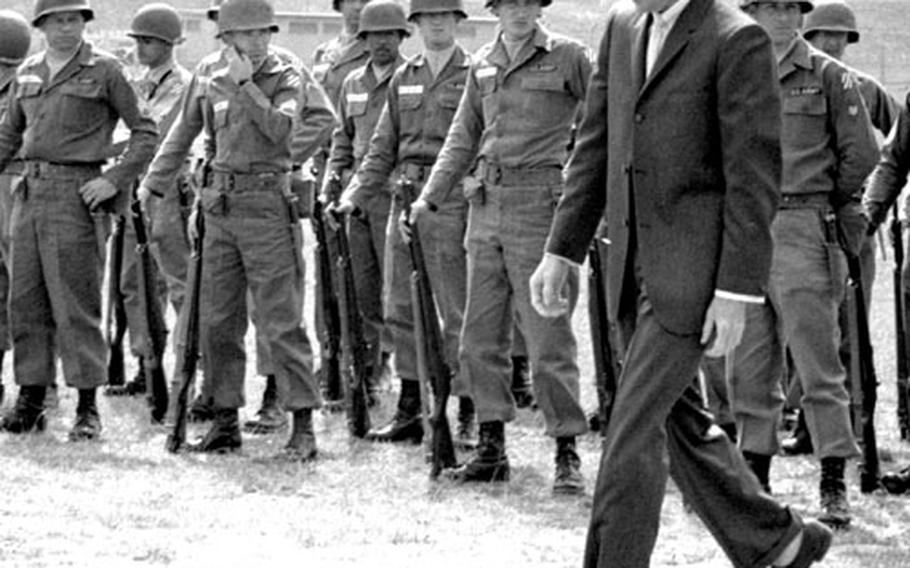 Soldiers watch as Audie Murphy walks across the set. (Dale Whitney/Stars and Stripes) 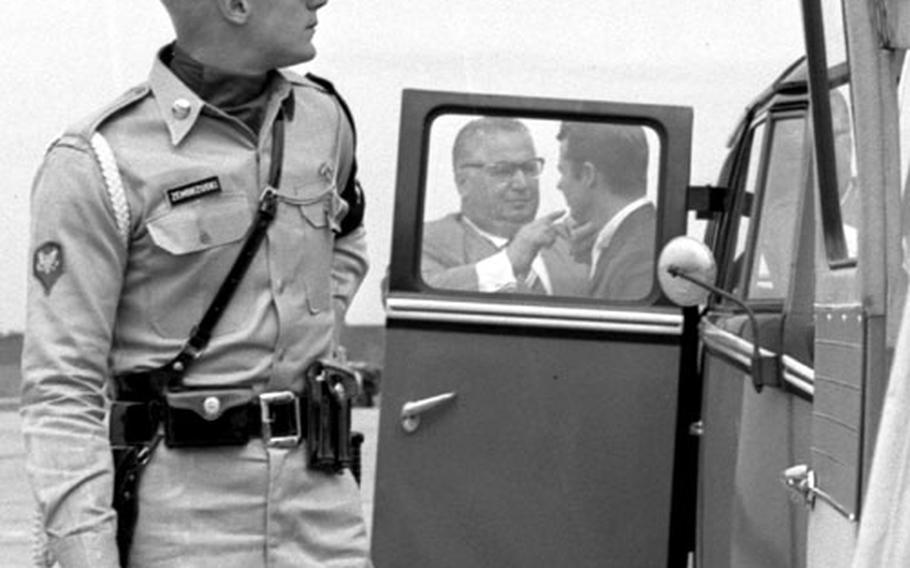 An MP stands guard as Audie Murphy gets ready for a scene. Murphy insisted on privacy, saying "you&#39;re not going to set me down and put on makeup in front of the whole damn Army." (Dale Whitney/Stars and Stripes) 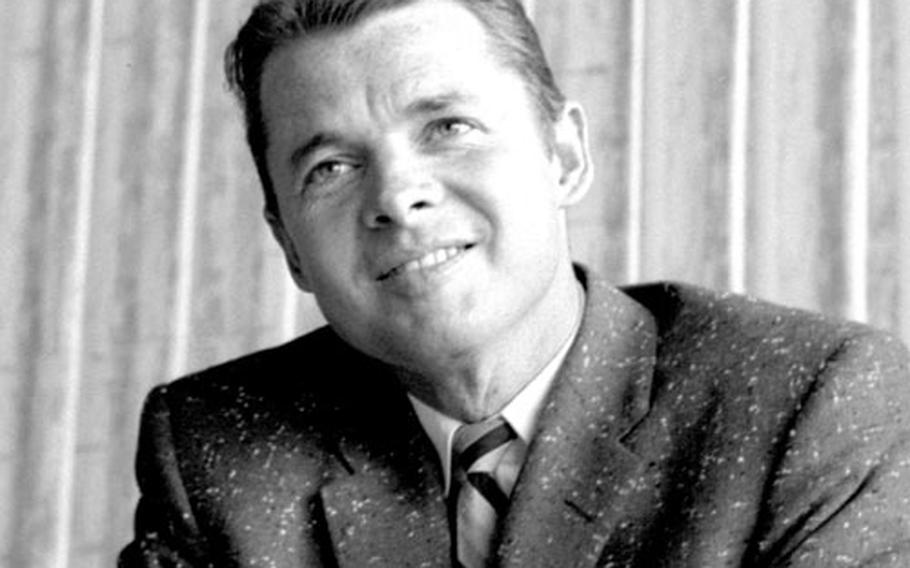 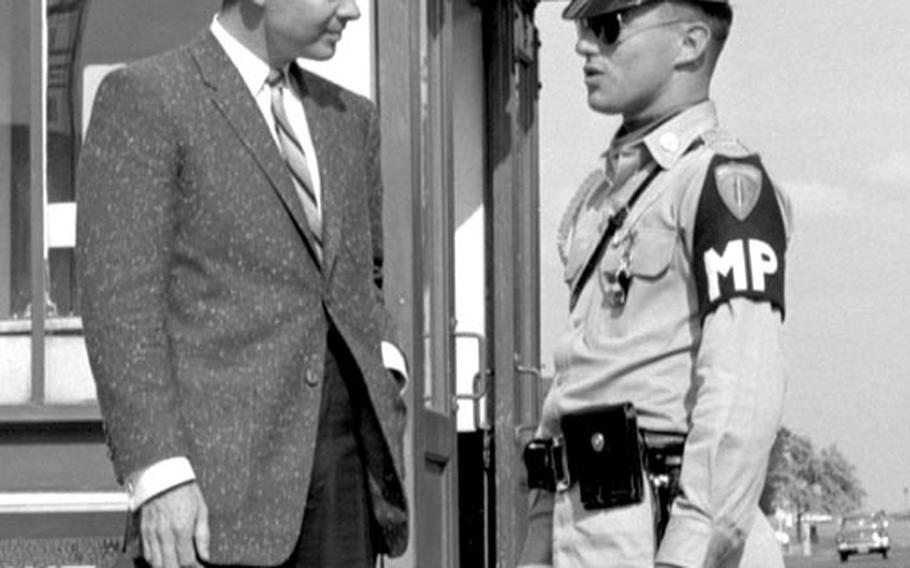 Audie Murphy talks with an MP at the gate at Würzburg. (Dale Whitney/Stars and Stripes)

Now 36 and showing some lines in the baby face that has always plagued him, the soft-spoken Texas farmboy-turned-movie-star is back with his old outfit, the 3d Inf Div, to make a documentary film about the missiles used in the Army of today.

The reunion at Würzburg marks his first visit to Germany since 1945, when as a battlefield-commissioned first lieutenant he took part in the capture of Augsburg and Nurnberg.

These battles marked the end of a trail that started in North Africa and led through Sicily, Italy and France.

Along the way, Murphy received the Medal of Honor, Distinguished Service Cross, two Silver Stars, three Purple Hearts and more than a dozen other decorations.

When asked if he had met any of his old buddies since his return, Murphy replied, "I'm afraid not. Out of my original Co B, 15th Inf Regt, there were only two men left after the war." A company at that time had approximately 200 men.

In reply to the question, "What do you think makes a man do the things it takes to win the Medal of Honor," Murphy: said, "A soldier does the things he's been trained to do. There's certainly no dramatic premeditation involved."

A German newspaper correspondent asked how Murphy could be the outstanding American hero of the war and not show any signs of wounds.

Murphy explained it by saying, "Well, I got hit three times, but nothing serious. I always got hit in the head."

The truth of the matter is that he is classified as 50 percent disabled from his wounds. He was suffering from a severe leg wound at the time he won the Medal of Honor by climbing up on a burning tank destroyer and mowing down some 50 attacking Germans.

Although Murphy has been making movies since the war, he never lost interest in the Army. He was a member of the Reserve and National Guard for a time.

When the Army asked him to come to Europe and make the missile film, he took time out from a TV series underway and donated his time and services.

Someone once described an actor as a "man, huddled over, banking the fires around his ego." Or as Marlon Brando put it, "An actor is a guy who when you ain't talking about him, he ain't listening."

Despite the bright lights and press agents of Hollywood, Murphy is the other extreme. He still has a self-conscious, almost shy quality about his personality. In fact, he gives the impression that he really doesn't enjoy being a movie star.

But above all, he doesn't like the hero bit. When someone starts asking about his experiences, he'll either attempt to pass them off as a joke, change the subject, or take off for the men's room.

About the only traditional Hollywood characteristics he displays are the flashes of temperament that reveal he stays wound up pretty tight much of the time.

Like the day at Würzburg when the cameraman halted the action and said Murphy needed additional makeup because of the heat. The makeup man indicated Murphy should take a chair sitting in full view of a large number of the troops taking part in the film.

Murphy's Irish came up quickly. "Oh, no you don't. You're not going to set me down and put on makeup in front of the whole damn Army."

The makeup man and Murphy then repaired to a truck parked nearby and he suffered through the ordeal without further complaint.

When it comes to dealing with the fans, Murphy is more than pleasant. He was busy handing out autographs and the director yelled for the autographing to cease so they could get on with the filming.

Murphy protested with his boyish grin, "I'm selling these. You're cutting in on my take."

Although Murphy has made several pictures other than westerns, the movie moguls still see him as a slightly over-age Billy the Kid. "They don't think I should get too far away from a horse," he explained.

This doesn't make Murphy too unhappy. Horses have always appealed to him, and he spends as much time as possible at his ranch near Riverside, Calif.

He didn't bring his wife, Pamela, or their two sons with him to Europe and he plans to bug out for home the minute the filming is completed in Germany and Italy next week.

The film, titled "The Broken Bridge," will be released to both military and civilian theaters late this year. Murphy takes the part of an "oldtimer" returning to his unit and finding how the weapons have changed since the war.

When asked if the missile age made him feel a little antiquated, Murphy replied, "I'm a little obsolete, but I hope to catch up. It brings back memories every time I pick up a piece of equipment."

Like most returning soldiers, he was impressed by the way Germany has been rebuilt since the war. And like many combat veterans, he has great respect for the German soldiers.

Perhaps the most ironic point of all is that he never would have fought against the Germans if some unknown recruiting sergeant hadn't sent him home.

When at the age of 17 he left his home at Farmersville, Texas, and went down to enlist in the U.S. Marines, the recruiting sergeant took one look and told him he was too small.

There has been some talk that the Army should send the sergeant a letter of appreciation.