ATV MRAPs are tested in Afghanistan 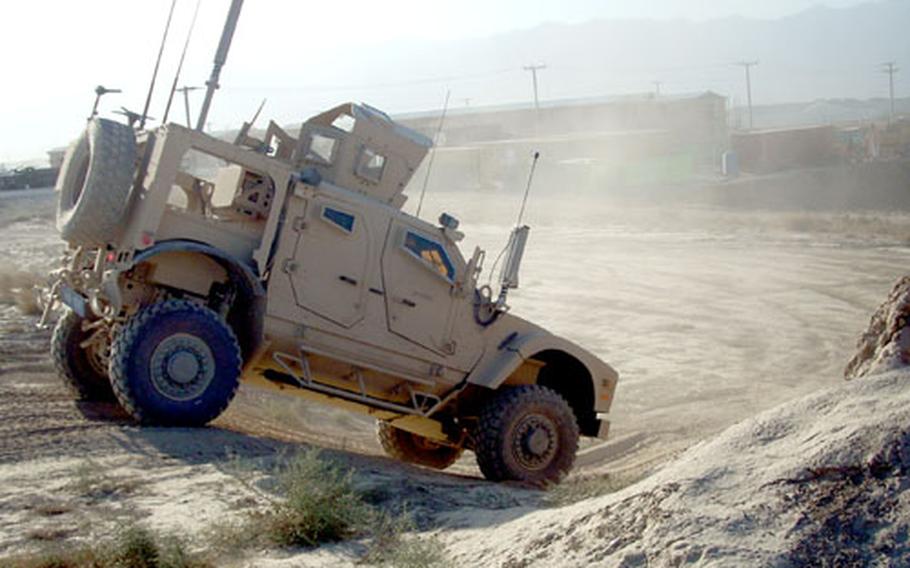 An officer test-drives the new MRAP all-terrain vehicle that is touted as a good alternative to the cumbersome Mine Resistant Ambush Protected vehicles currently being used. The new MATV is designed for easier maneuverability, but some question whether they will be as effective at saving lives. (Dianna Cahn / S&S)

BAGRAM AIR FIELD, Afghanistan &#8211; The new lighter all-terrain vehicle MRAPs gave them a thrill when officers on Sunday test-drove the first ones to arrive in the war zone, zipping up and down inclines that the larger more cumbersome predecessors struggle to navigate.

But the bomb-resistant M-ATV, or Mine Resistant Ambush Protected ATV, is meeting with some skepticism.

It is designed with the same V-shaped hull that disperses the blast of a road-planted bomb, making &#8220;Thank God for the MRAP&#8221; a near-constant refrain among troops on the front lines. It answers the challenge of the clunkier MRAP that cannot navigate the more mountainous and off-road terrain of much of the Afghan battlefield.

But a senior counter improvised explosives device commander questioned whether the entire premise of the lighter vehicle mitigated some of its benefits because weight is part of what makes the MRAP so resistant to the bombs.

Still, the vehicle, which weighs at least 16 tons, is far more comfortable and has suspended seats and padding so soldiers&#8217; feet don&#8217;t absorb the brunt of a buried bomb blast. The smaller M-ATV is not as alienating to the Afghan population as the hulking MRAPs now on the ground, an important element in a counterinsurgency war.

And it can maneuver.

The first batch of M-ATVs arrived in Afghanistan on Oct. 1. There are now seven at Bagram and more are on the way.