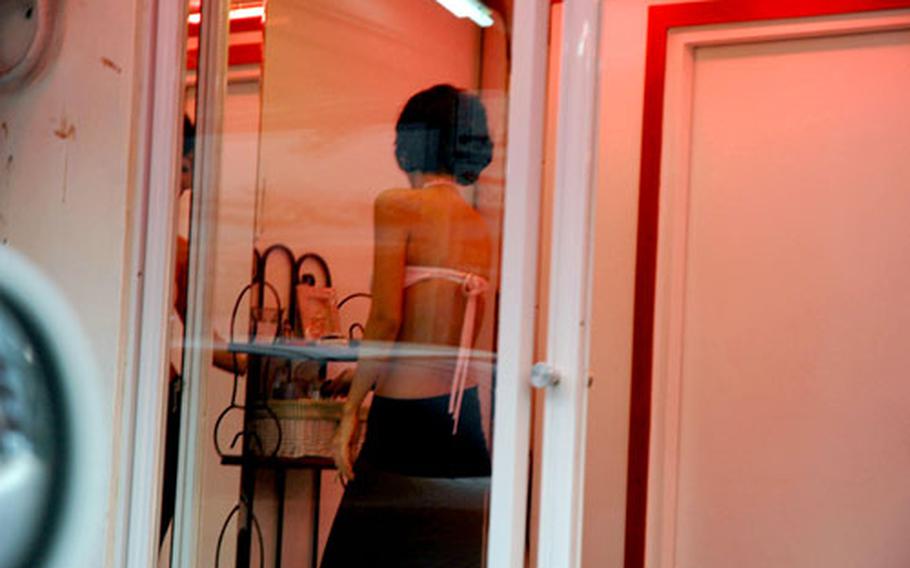 Buy Photo
A woman stands in a window along a 'red-light' strip just outside of Yongsan Station in Seoul in this undated file photo. A group of former prostitutes has filed a lawsuit against the South Korean government seeking more than $1.2 million in compensation. (Stars and Stripes)

SEOUL, South Korea — Attorneys for a group of former prostitutes who serviced U.S. troops decades ago argued Friday they should receive compensation because the South Korean government encouraged them to “work for their country.”

The 122 women are suing the government for $1.2 million and asking for an official apology and an investigation into a system of open prostitution that operated in the military camp towns surrounding U.S. bases for several decades after the Korean War. The women claim their human rights were violated. Their attorneys say documents show the national government, including a ministry overseeing health and social affairs, was directing local health centers to manage the women’s health care.

“The plaintiffs were not aware at the time that prostitution was illegal,” Ui Eun-jin, one of several attorneys for the women, said during the first hearing in the case. “They were being educated that this was work for their country and an act of patriotism.”

Ha Ju-hee, another attorney for the women, said the national government had designated specific areas for the women to practice prostitution, forced them to register with health clinics, get regular health checkups and then treatment if they were found to have sexually transmitted diseases.

“The state caused the plaintiffs pain, so the state has a duty to compensate them,” she said, adding that the national government also praised the women for earning U.S. dollars. South Korea was desperately poor after the Korean War, and American currency was seen as a way to build up its struggling economy.

About 60 people, mostly women who appeared to be attorneys, the former prostitutes and young women who had supported them at a rally earlier outside the courthouse, packed the Seoul Central District courtroom. No U.S. military representatives were present.

Government attorney Lee San Hae said the women had not proved that the national government encouraged them to act illegally.

He also objected to the women calling themselves “comfort women,” a term frequently used in South Korea to refer to women forced into sexual slavery during the Japanese colonial occupation of the peninsula. Tokyo’s perceived lack of a sufficient apology to the comfort women has become a major political issue between the two countries.

The next hearing in the case is scheduled for Jan. 30.