Attacks in Afghanistan kill dozens day before cease-fire with Taliban 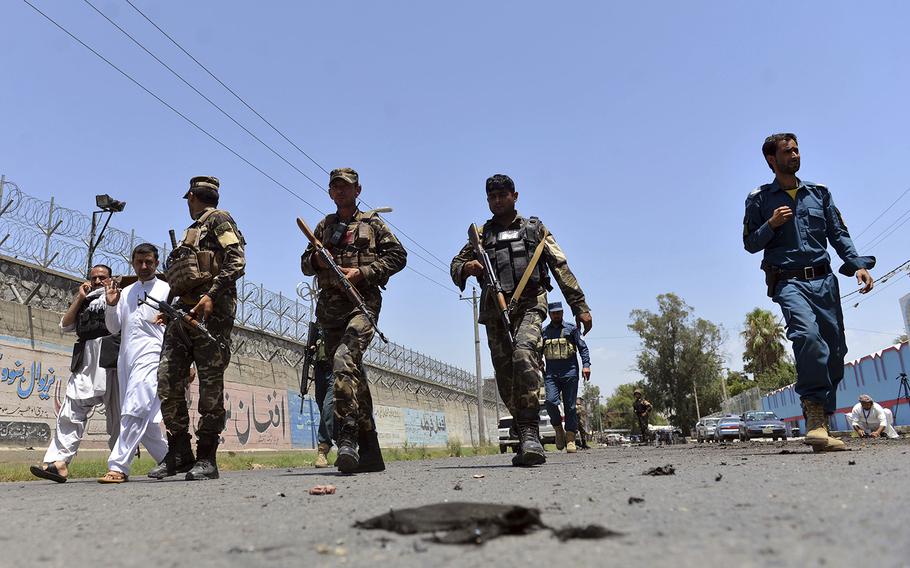 Afghan security personnel arrives at the site of suicide attack in the city of Jalalabad east of Kabul, Afghanistan, Monday, June 11, 2018. A suicide bomber wounded at least 10 civilians when he struck near the education department in the eastern city of Jalalabad. (Mohammad Anwar Danishyar/AP)

KABUL, Afghanistan — A suicide bomber on foot detonated his explosives near a van full of government employees on Monday, killing at least 12 people ahead of an anticipated Taliban cease-fire.

The attack near the entrance to the Ministry of Rural Rehabilitation and Development in the western part of the capital occurred as workers were leaving for the day, said Kabul police spokesman Hashmat Stanekzai. At least 30 people were wounded and officials feared the number of casualties could rise. The Islamic State claimed responsibility.

The ministry attack came shortly after reports of an explosion in a house, also in western Kabul. That blast killed at least one and wounded three others, Stanekzai said.

Bloody attacks have continued throughout the country as Afghans await a weeklong government stand-down of offensive operations against the Taliban that begins Tuesday and lasts eight days. A Taliban truce is expected to start Friday and last the three days of the Muslim Eid holiday.

The Taliban’s cease-fire on government troops is their first, but the group said that international forces would still be fair game during that time.

Kabul’s international backers will honor the government cease-fire on Taliban forces, NATO’s Afghanistan mission said, but the top U.S. general in the country said the separate counterterrorism mission would step up attacks on the ISIS affiliate during the same period.

In eastern Nangarhar province, one of the few where ISIS is active, police on Monday reportedly prevented a lethal attack on the provincial education department in Jalalabad from turning even more deadly. Police there killed three attackers after a fourth detonated his suicide vest. One police officer was killed and more than a dozen civilians were wounded.

No group immediately claimed responsibility for the attack.

In eastern Ghazni province, at least six people were killed and three others wounded when the vehicle they were traveling in struck a roadside bomb, Afghanistan’s Pajhwok News reported. Among the casualties were women and children.

Monday’s violence follows several attacks throughout the country over the weekend that left dozens of government forces dead.