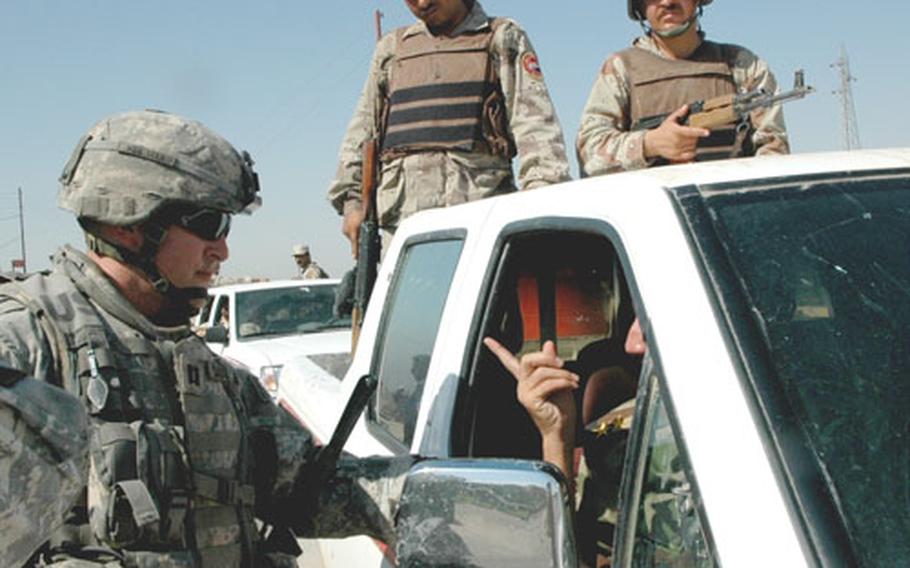 Capt. David Sandoval speaks with Iraqi soldiers who were given permission to drive Sunday despite the driving ban. In the back of their truck, covered in a blanket, lay the body of one of the soldiers killed in Saturday’s attack. (Anita Powell / S&S)

Capt. David Sandoval speaks with Iraqi soldiers who were given permission to drive Sunday despite the driving ban. In the back of their truck, covered in a blanket, lay the body of one of the soldiers killed in Saturday’s attack. (Anita Powell / S&S) 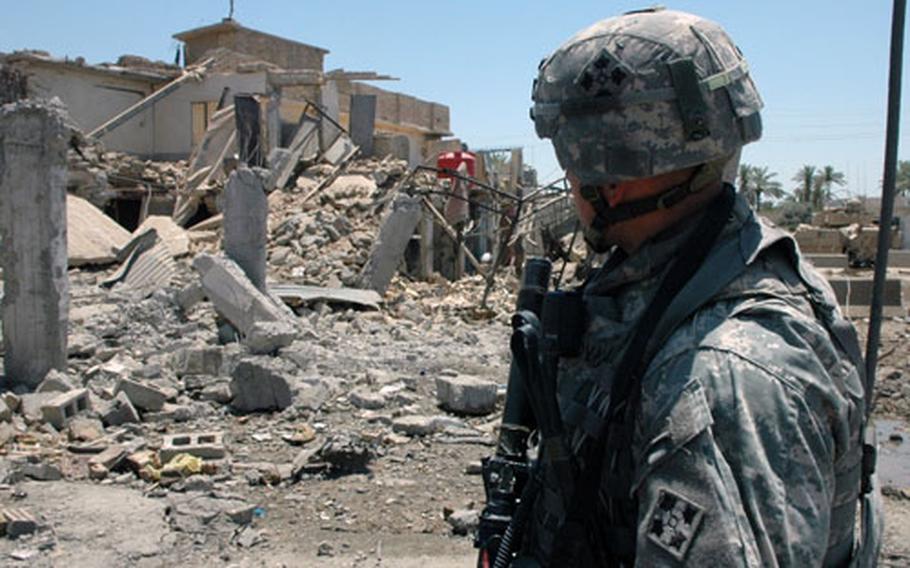 DULUIYAH, Iraq &#8212; At 1:22 p.m. Saturday, a man in a dirty white van drove up to an Iraqi army checkpoint in the center of this Sunni town northeast of Baghdad.

As the van reached the army checkpoint, which also is manned by local police, a shooter fired several shots from the opposite direction, diverting the attention of the guards. The van driver suddenly swerved left and rammed into a vacant shop, detonating the van.

Could the bomber have been stopped? In a nation where nothing is simple, the anatomy of a suicide bombing is a study in complexity, mistrust and mixed emotions.

Eventually, U.S. Army officials say, the man would have passed through at least one Iraqi police checkpoint on his southward voyage. In this volatile region, local police &#8212; more than half of them members of the influential Jabouri tribe, which Army officials say has links to insurgent activity in the area &#8212; outnumber Iraqi army soldiers two to one.

And tension between the two groups is evident.

The morning after, local police chief Gen. Mohammed al-Jabouri &#8212; who sports gold-rimmed aviator glasses, a well-trimmed moustache and &#8220;Miami Vice&#8221; hair &#8212; sat in his office and fumed as he was berated by Capt. David Sandoval, commander of Company A, which patrols Duluiyah.

Despite both falling under the umbrella of Iraqi security forces, it is clear &#8212; in Duluiyah, at least &#8212; that there is little love between the Iraqi army and police, and between the police and the people.

American officials say it&#8217;s difficult to trust those who Iraqis must trust to keep security.

&#8220;I know that the [police] organization over there is infiltrated,&#8221; said battalion commander Lt. Col. Jeff Martindale.

&#8220;There have been at least four [Iraqi army] soldiers killed, execution-style, in their homes and between their homes.&#8221;

Locals view the violence with a suspicious eye and with unnerving equanimity.

Tunis Abed, a 36-year-old who is pregnant with her seventh child, gathered her six children as she waited for the men to return from a funeral Sunday.

On Saturday, her family&#8217;s Iraqi army guard &#8212; assigned to guard the house after the death of her husband &#8212; heard the shots and ran to the scene to help. He was killed in the blast. Abed&#8217;s husband, an Iraqi army soldier, was killed seven months ago. These days, one man takes care of nineteen people.

When asked about the victims&#8217; families, Mohammed, the police chief, shrugged.

Sandoval said he hopes the bombing won&#8217;t set back the positive progress his company has made with local security forces. In the last month, his company has worked with the local army unit to conduct joint patrols, man checkpoints and root out insurgents.

He offered Mohammed an exasperated ultimatum.