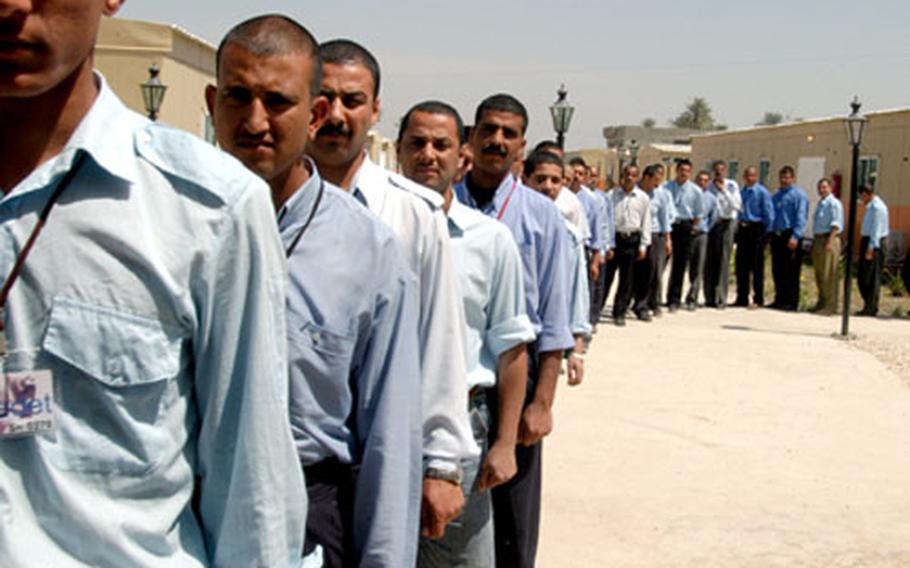 Cadets at the Babylon Police Academy in Hilla, Iraq, wait in line to enter the dining facility for lunch. The students do everything as a platoon, from training to dining. The academy is the first of five training centers to use only Iraqi instructors. (Sandra Jontz / S&S)

HILLA, Iraq &#8212; Nothing of what Iraqi police 1st Lt. Manar Jasim tells his students gets lost in translation. He speaks Arabic, and so do his students.

Babylon Police Academy in Hilla is the first of the five Iraqi police training centers to use only Iraqi instructors to educate police cadets in their eight weeks of training. Eighteen instructors were selected from the advanced and specialized training courses run by the U.S.-led Civilian Police Assistance Training Team, better known as CPATT.

CPATT, working under the Multi-National Security Transition Command-Iraq, is responsible for organizing, training, equipping and mentoring the entire Iraqi police force. To date, more than 75,000 have received some level of training through CPATT. The goal is a force of 135,000.

By the fall, Babylon Academy leaders hope to increase the instructor roster to 50, and expand its student base from the current 520 cadets to 1,250, said Maj. Gen. Qais Hamaz Abood, the Babylon province police chief.

The cadets live on the nearly 2-square-mile compound for the eight weeks of training, but return home on their weekends, Friday and Saturday. During the week, they have an hour of physical training in the morning, and then 15 minutes to shower and shave before a day full of lessons.

About 70 percent of the curriculum &#8212; which ranges from classroom lectures on human rights, counter-terrorism and Iraqi law, to outdoor training such as range shooting and hand-to-hand combat &#8212; is hands-on.

There is no shortage of candidates seeking work among the ranks of the police in spite of the near-daily attacks by insurgents who are killing them in droves. Work is work, and 20-year-old Mohammed Hasan said he needs a job.

Others have reasons of patriotism.

The Feb. 25 suicide bombing in Hilla that slaughtered 125 police candidates waiting in line for medical testing didn&#8217;t deter Salah Hamad, 28, from signing up.