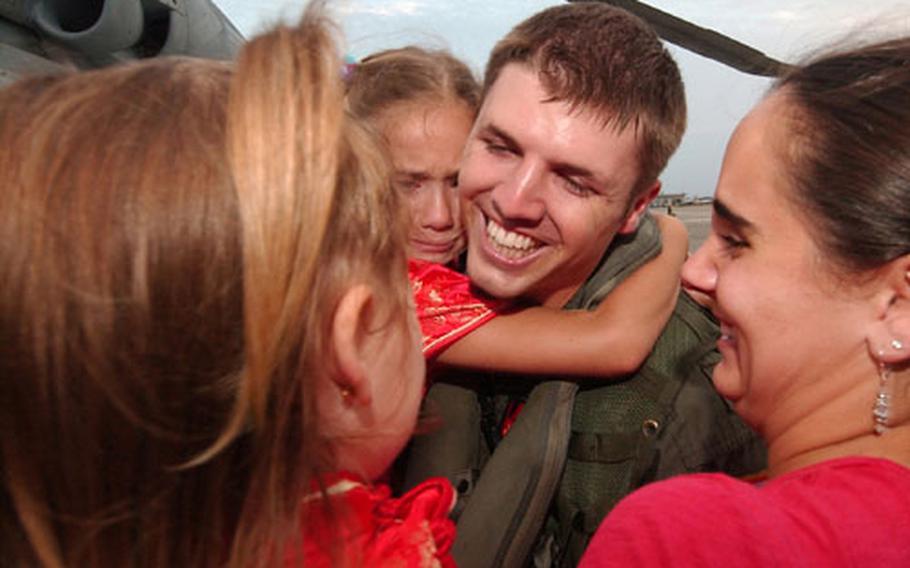 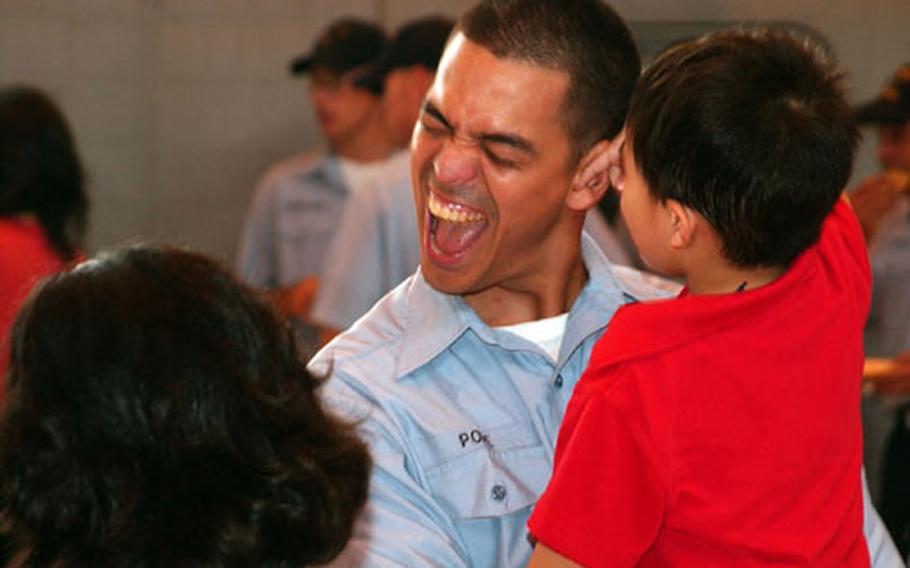 Lt. Bobby Maslar hugs his wife Tamara after returning from a five-month deployment on Friday. (Courtesy of U.S. Navy) 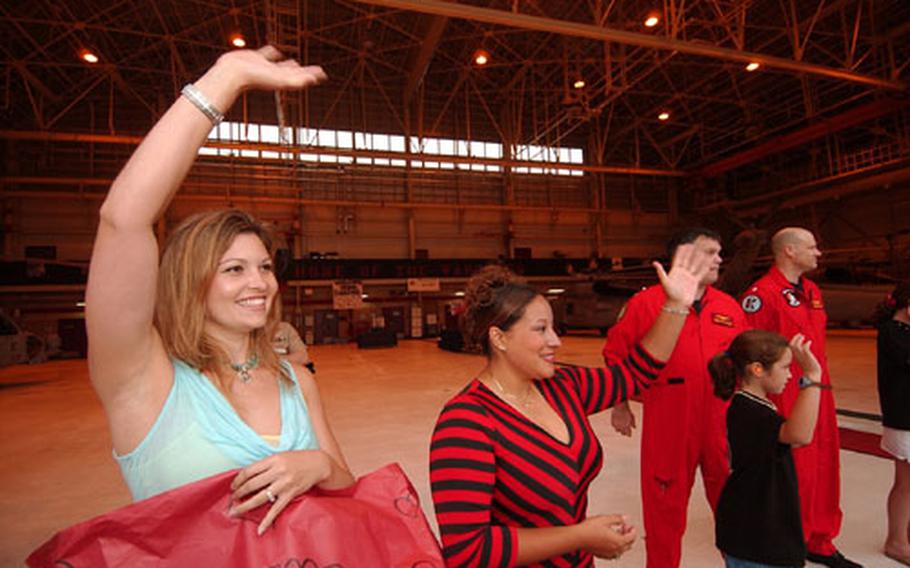 Tamara Maslar, left, and Glenda Deveaux wave to their husbands – Lt. Bobby Maslar and Lt. Napoleon Deveaux - as the sailors return from a five-month deployment. (Courtesy of U.S. Navy)

But their trip aboard Yokosuka-based USS Cushing was just part of life for a squadron that&#8217;s deployed about 220 days a year protecting the smaller 7th Fleet ships.

The 23 members and two helicopters from HSL-51 Detachment Seven &#8212; one of eight in the squadron &#8212; returned Friday from their mission to the Middle East.

In the Gulf, they helped stop smugglers and protected Iraq&#8217;s two offshore oil terminals after one was damaged in a suicide attack in April. Pilots flew mostly at night, moving away from their normal mission &#8212; hunting subs and guarding against surface dangers &#8212; to assist with search and seizure and keeping fishing boats and dhows away from the oil terminals.

Some small boats seemed to test their reaction, floating too close and obliging the helicopters to fly over and buzz them away. &#8220;Many seemed to be testing the zone,&#8221; said Lt. Cmdr. Lance Lafond, detachment officer-in-charge.

For sailors in the detachment, the deployment meant the usual hard work. But there were two distinctions on this cruise: one was being part of the historic effort in Iraq; the other, the realization that dangers, including suicide bombers in boats, could be anywhere.

Temperatures in the hangar smoldered in the triple digits &#8212; even at midnight. Crewmembers battled desert elements that could devastate any piece of equipment&#8217;s mechanics and electronics. &#8220;There was a lot more corrosion prevention because of the dirt and sand in the air,&#8221; Crossland said. &#8220;It was a lot of cleaning.&#8221;

During the mission, the crew flew 621 hours and traveled 14,000 miles just getting there and back. On the way home they dodged two typhoons, Lafond said.

The detachments usually are attached to cruisers, frigates and destroyers, although one detachment currently is aboard the USS Kitty Hawk.

The Seahawk helicopters the tactical detachments fly give them, and the ship to which they&#8217;re attached, control of the night with night vision, infrared and other technology.

They hunt subs and guard the water around a ship but the aircraft also can ferry people, help search-and-rescue missions, provide replenishment and convey electronic messages between ships too far apart to communicate.

Each detachment is away 210 to 220 days a year, he said. It&#8217;s one of the biggest squadrons of its type in the Navy, the largest at Atsugi and the only one with eight detachments ready at all times, Patten said.

And although they&#8217;re divided into small groups and scattered about the 7th Fleet, they still maintain cohesiveness, Patten said.

That moving brought members of Detachment Seven to a variety of ports on their way to and from the Gulf.

Crossland said it was interesting seeing some of the ports they visited, including Malaysia, Sri Lanka, Bahrain, Dubai, India and Thailand. The stops made him appreciate being home.

After shipboard life for five months, he&#8217;s even more ready to enjoy home: