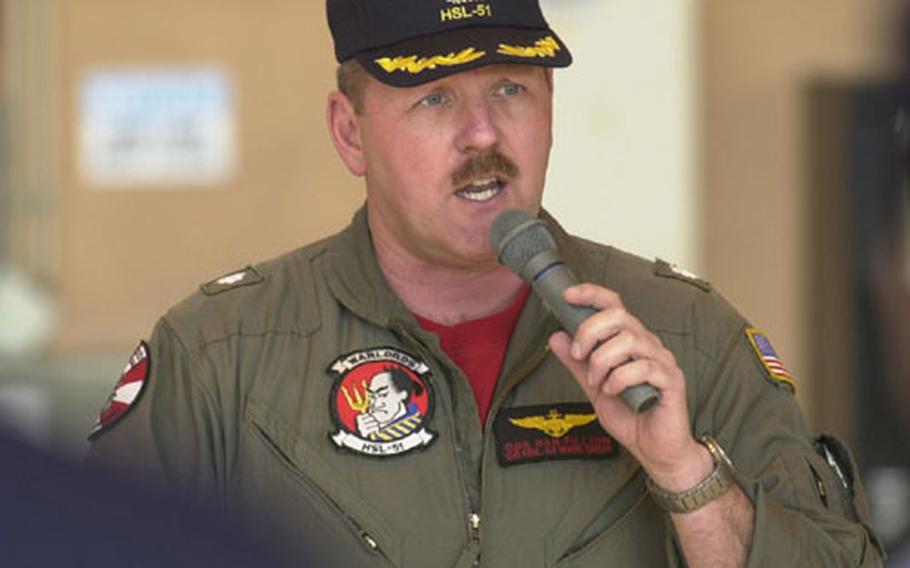 Commanding Officer of squadron Helicopter Anti-Submarine Squadron Light FIVE ONE (HSL-51) at Naval Air Facility Atsugi, Commander Dan Fillion thanks the crew for their efforts in the squardron&#39;s milestone of 75,000 hours mishap-free. HSL-51 is the only forward deployed LAMPS squadron which deploys UH-3H and SH-60B helos to various ships in Yokosuka. (Jim Schulz / S&S)

ATSUGI NAVAL AIR FACILITY, Japan &#8212; In the midst of war, members of the largest aircraft squadron at this base near Tokyo quietly are celebrating a milestone: 75,000 flying hours without a mishap.

Helicopter Anti-Submarine Squadron Light 51 should have reached the mark with a routine flight Wednesday. They were to congratulate each other, shake hands and eat some cake. But privately, they admitted, they wished they were elsewhere: near the fighting in Iraq.

The squadron, after all, takes its call sign, &#8220;Warlords,&#8221; from the famous Japanese Samurai warrior, Musashi.

Of the squadron&#8217;s 300 members, 60 remain at Atsugi; seven of eight detachments are deployed to sea.

Getting the call to deploy is a matter of timing.

HSL-51 provides combat-ready helicopter detachments for deployment aboard ships based in Yokosuka, Japan. Its primary mission is anti-surface and anti-submarine warfare.

Billed as the world&#8217;s most technologically advanced helicopter, the SH-60B carries weapons and electronic sensors, such as radar and infrared.

Its several capabilities include dropping sonic detectors in the water to locate enemy submarines or launching torpedoes.

The achievement may be even more remarkable considering the inherent hazards of naval aviation.

The recent string of helo crashes in and near Iraq serves as a harsh reminder of those perils, Fillion said.

But crewmembers who fly the helos aren&#8217;t fazed by the risks.