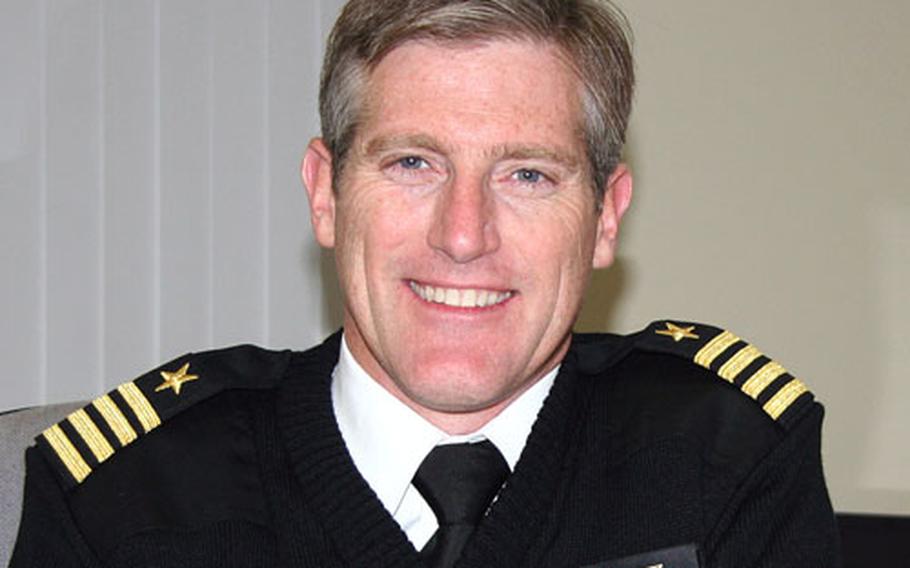 ATSUGI NAVAL AIR FACILITY, Japan &#8212; Atsugi&#8217;s new commander, Capt. Justin D. Cooper II, hopes to keep his sailors behaving, his base co-existing with the neighboring communities and the quality of life and readiness at Atsugi as shipshape as it was when he took the helm less than two months ago.

All commanders deal with readiness, quality of life, behavior and community relations. But in Japan, he notes, there is much more riding on the last two.

Less than 30 miles away, the community gaze is focused heavily on the behavior of sailors at Yokosuka Naval Base, where this week three sailors go on trial for crimes, including one in connection with a robbery and killing.

Cooper said he has a few lucky advantages over leaders at Yokosuka: Sailors at Atsugi live in barracks, a step up from the cramped ship berthing many Yokosuka sailors occupy; there are few bars outside base at Atsugi; and air squadrons are much smaller than ships, allowing leaders to interact more with individual sailors.

&#8220;A lot of frustration that sailors in Yokosuka have to deal with is taken out unfortunately sometimes with alcohol and violence,&#8221; Cooper said.

Atsugi sailors have had very few behavioral problems in recent years. But Cooper doesn&#8217;t intend to rely on that good fortune.

One of his first programs as base commander was launching a series of television spots using the sailors of the year at Atsugi as role models, along with sailor-actors portraying bad behavior &#8212; including alcohol abuse, aggressive driving and loud music &#8212; at its most annoying to illustrate the problems.

The central themes are that one person can make a difference, and that bad behavior can disrupt bilateral relations.

Cooper also uses incentives to guide good behavior. One petty officer who recently participated in a speech festival off base in Japanese earned a letter of commendation from Cooper. He also sent her parents a note telling them of the achievement. He plans to personally send letters to families each time his sailors do good things, he said.

And he&#8217;s doing his own part to foster good community relations. Cooper learned to write basic Japanese before arriving, while completing a National Security Fellowship at the John F. Kennedy School of Government at Harvard University last year. He also asked professors for tips on living in Japan, a place to which he had tried to get orders for 15 years, he said.

Local communities might also feel better knowing the leading issue many have with the base &#8212; jet noise, particularly at night &#8212; could be lessened down the road.

In a realignment plan announced in October and to be completed in coming weeks, the U.S. and Japanese governments agreed to move Atsugi&#8217;s loudest jet squadrons to Marine Corps Air Station Iwakuni.

But any such move is years away, Cooper added. And it won&#8217;t mean an end to the base or the level of service.