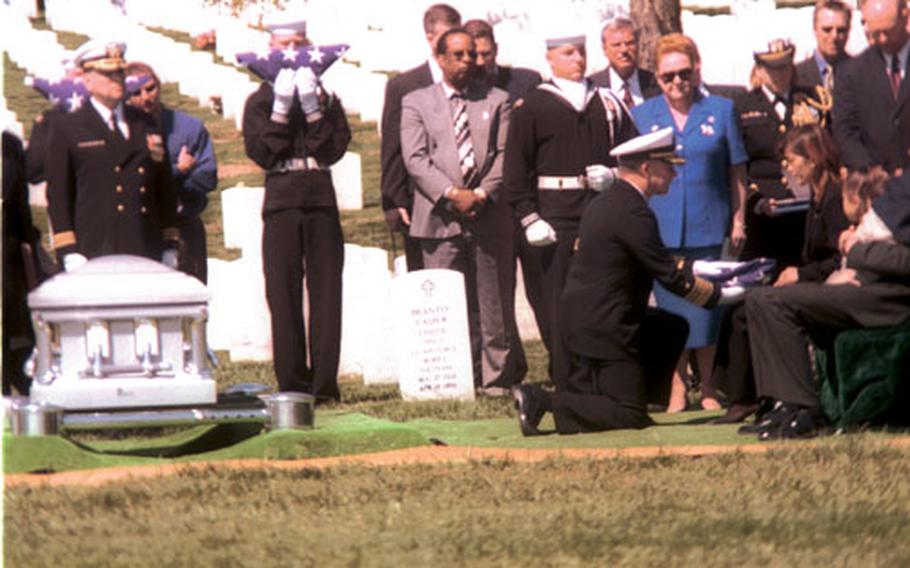 Vice Adm. Gerry Hoewing, chief of Naval Personnel, speaks with Akiko White, the widow of Navy Lt. Nathan White, after presenting her with a Purple Heart and the flag that had draped her husband&#39;s coffin. (Xeriqua Garfinkel / S&S)

Vice Adm. Gerry Hoewing, chief of Naval Personnel, speaks with Akiko White, the widow of Navy Lt. Nathan White, after presenting her with a Purple Heart and the flag that had draped her husband&#39;s coffin. (Xeriqua Garfinkel / S&S) 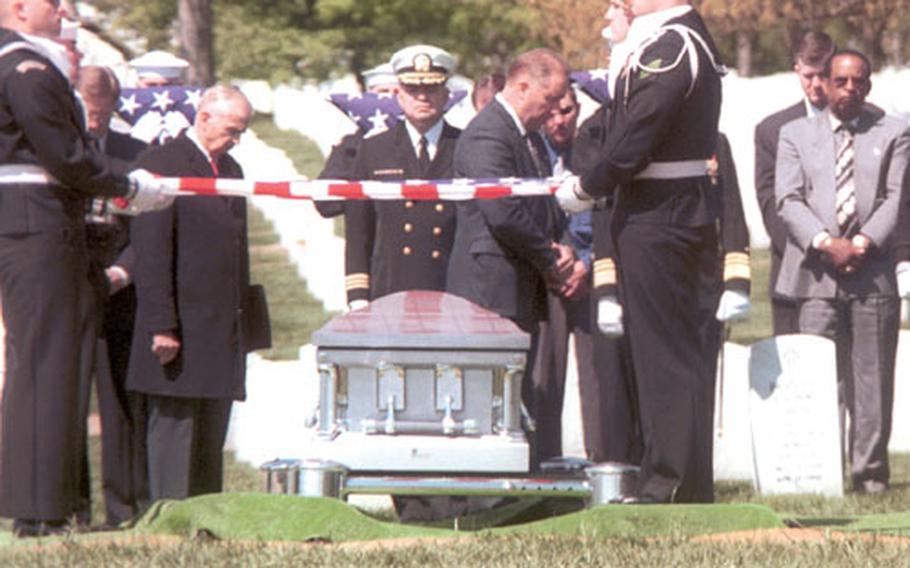 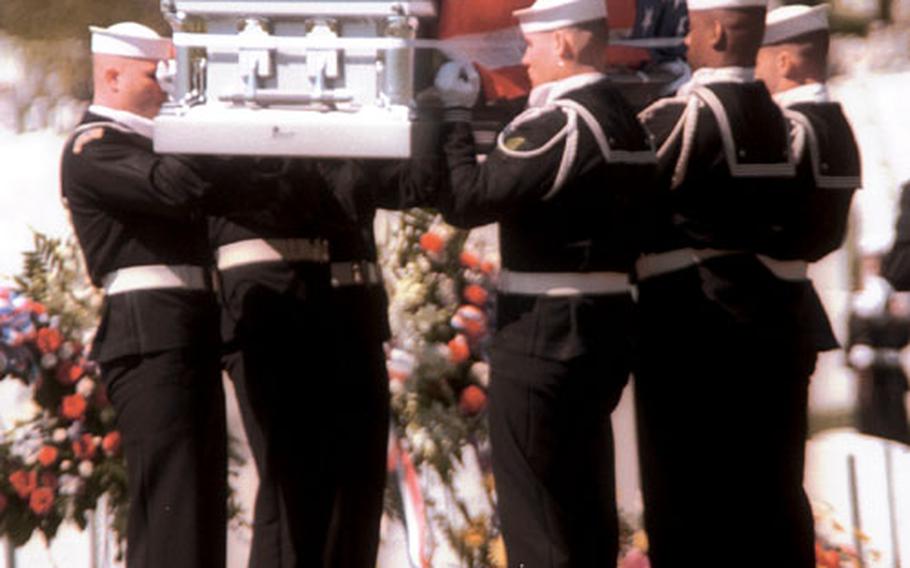 They had outlived a child, and gathered Thursday to bury him.

&#8220;Thirty years ago, I held that little boy and gave him the name of Nathan,&#8221; Dennis White said, as he dedicated a burial plot at Arlington National Cemetery in honor of his son, Navy Lt. Nathan D. White &#8212; the first person from Atsugi Naval Air Facility, Japan, to perish in the war in Iraq.

&#8220;I know Nathan would not have wanted me to do this,&#8221; he said between choking on tears, his measured words slow and barely loud enough for many of the 100 mourners to hear.

Under clear skies, on an unseasonably crisp spring Washington day, sailors and airmen, strangers and friends, the young, the old, the grieving family &#8212; the heartbroken had gathered to say farewell to a young warrior.

Death claimed more than the life of a combat pilot.

It claimed the life of a husband, a brother, a son, a father of three young children.

This stark, empty plot of land, foreshadowed by what lay across the road.

A sea of white headstones.

The cemetery, on a sprawling 624 acres outside the nation&#8217;s capital, has scheduled 17 funerals there, and have completed 13 of them. The others buried Thursday were Army Capt. Edward Korn, 31, and Army Capt. James Adamouski, 29.

Thursday, they gathered to bid goodbye to 30-year-old Nathan White, whose service in uniform as an officer garnered him a full honors military burial. The horse-drawn caisson, the military band, a missing-man formation flyover involving four F/A-18s, the seven-member military firing team who pierced the cool air with three shots each.

The solemn sounds from the bugler.

White was part of Carrier Air Wing FIVE and flew as part of VFA Squadron 195, one of three Hornet squadrons with the USS Kitty Hawk aircraft carrier.

He died April 2 after his F/A-18 Hornet was shot down over Iraq.

U.S. officials are investigating if White&#8217;s jet was shot down by a U.S. Patriot missile.

His wife, Akiko, and their children, Courtney, Austin and Zachary, traveled to Washington for the funeral. They declined media interviews.

Twenty-two days and three memorial services after his death, Nathan White was laid to rest.

Vice Adm. Gerry Hoewing, chief of Naval Personnel, kneeled before his widow to present her with the flag that moments before had draped her husband&#8217;s silver-colored coffin.

He spoke, too softly for anyone but her to hear.

Then he presented her with another military token.

One revered, but accepted with great sorrow.

For he handed Akiko her husband&#8217;s Purple Heart.