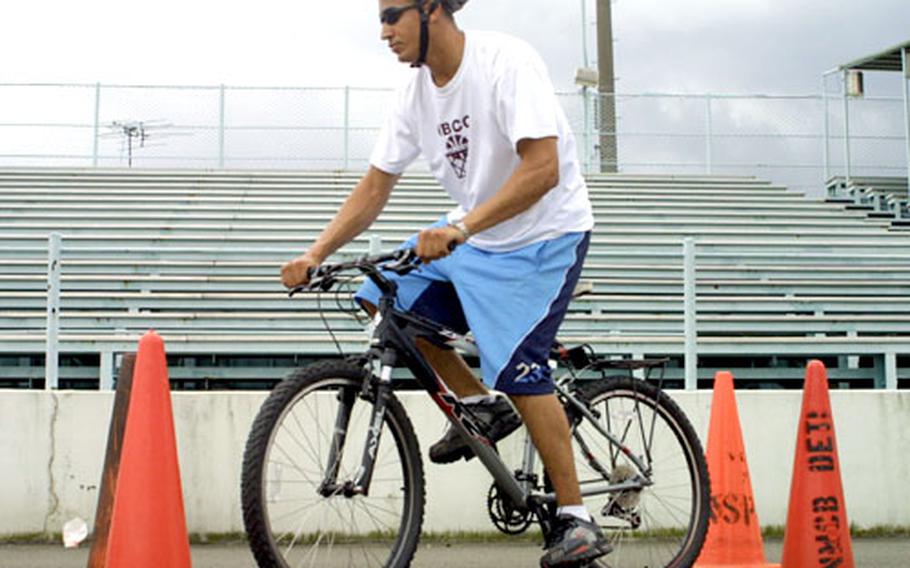 They spent two days training at Atsugi and Kamiseya, learning patrol techniques and safety in a classroom and practicing agility and endurance on obstacle courses and long rides.

This is the third bike patrol, said Petty Officer 1st Class Timothy Wilson, a master-at-arms and the security training officer who helped start the program and now serves as its supervisor.

Two years ago, security used bicycles for patrols during base activities. They expanded the effort to a full-time summer patrol to improve community policing.

Bicycle patrols help law enforcement get up-close and personal with the community, Wilson said, adding an element of stealth since people don&#8217;t always look out for two-wheeled patrols.

For the most part, the patrols deal with community problems &#8212; drunk or unruly people or traffic violators. They keep an eye on neighborhoods and help foster interaction.

&#8220;It&#8217;s a lot more community-oriented,&#8221; added Petty Officer 1st Class James Crocker, a master-at-arms. He belonged to a similar patrol in the United States and looked forward to joining Atsugi&#8217;s this year.

The patrols put a positive and friendly face on the department, members said. Patrol officers hand out Drug Abuse Resistance Education items and participate in children&#8217;s bicycle rodeos and other events.

The patrols also are less costly than traditional vehicle patrols that require fuel.

The patrols run all times of the day and night. Patrol officers still do other jobs, such as standing guard. And members still must participate in physical training in line with Navy requirements.

The job has risks, such as hitting invisible obstacles at night, said Petty Officer 2nd Class David Harrison, a master-at- arms and bike instructor who served on the patrol the past two years. Bicyclists also are less protected than in a sturdy vehicle.

Basic bike maintenance is an important part of the job. Patrol officers spend about 30 minutes before each patrol checking out their equipment, Harrison said.

They wear cargo shorts and Coolmax shirts, a material designed to dissipate sweat to help keep them cooler in the raging humidity. In the summer heat, the patrols survive on sunscreen, bug spray and plenty of water.

Participants for the patrol are selected based on strong evaluations, quick thinking, good judgment and ability to create a positive image for the department, Wilson said.

The patrols run during the warm months, generally until October, he said.