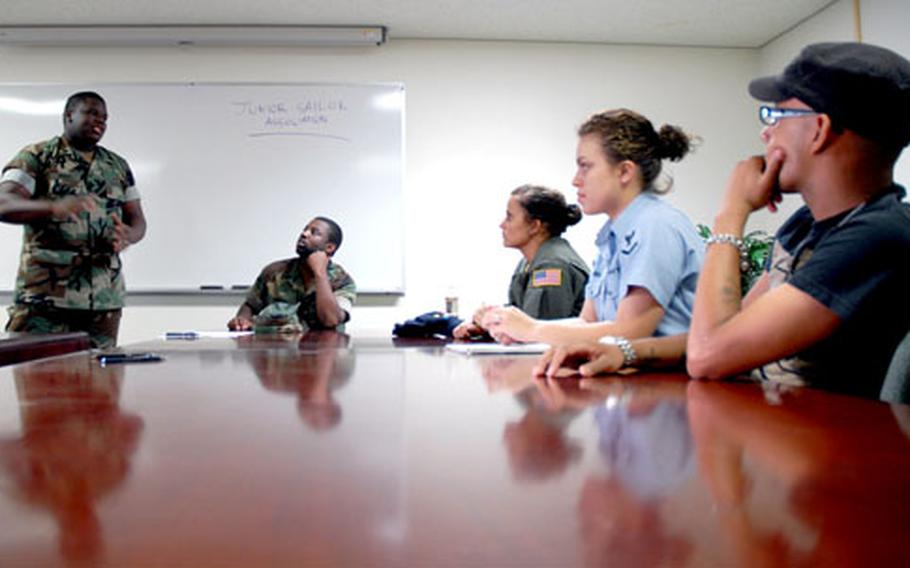 Petty Officer 2nd Class Jamal Borden talks during the first meeting of the new Naval Air Facility Atsugi Junior Sailor Association June 4 on base. Since the first meeting, the group has grown from eight sailors to about 40. (Photo courtesy of Barry Riley)

What started out three years ago as a conversation between two sailors turned into a meeting some 40 sailors strong last week.

Hayes agreed, said he was going to look into it, and learned they would need to include E-4s and E-5s. The results of their first election will be sorted out next week.

Hayes relocated before getting to see the group come together. Riley says he too is leaving soon, but not before doing all he can to spread the word. He said in just a week&#8217;s time, the number of interested sailors went from eight to 40.

The group is taking cues early on from Petty Officer 1st Class Michael Showers, president of Atsugi&#8217;s 1st Class Association. He and other E-6s are helping the new group write bylaws and learn how to perform their office duties.

"This has the potential to be the largest association on base," Showers said, comparing the junior group to the senior groups. "They&#8217;re really amped up about it. I think they&#8217;re going to take this program and do great things with it."

Atsugi sailors aren&#8217;t the only ones in the area looking to form a junior group. Sailors assigned to Commander, Naval Forces Japan on Yokosuka Naval Base are hoping to establish one as well.

Petty Officer 2nd Class Chad Shiflett recently arrived at Yokosuka and is trying to get the CNFJ E-5-and-below group off the ground. He said the only alternative previously was to join with the Fleet Activities Yokosuka 2nd Class Petty Officers&#8217; Association.

The benefits for the CNFJ sailors mirror many of those for the Atsugi group, Shiflett said. He said one emphasis will be to stay out of trouble and avoid spending large amounts of time at the local "Honch" hangout. Another will be that sailors can help their careers by being active in the community and pushing each other to do better. He hopes to see the entire group motivating other groups.