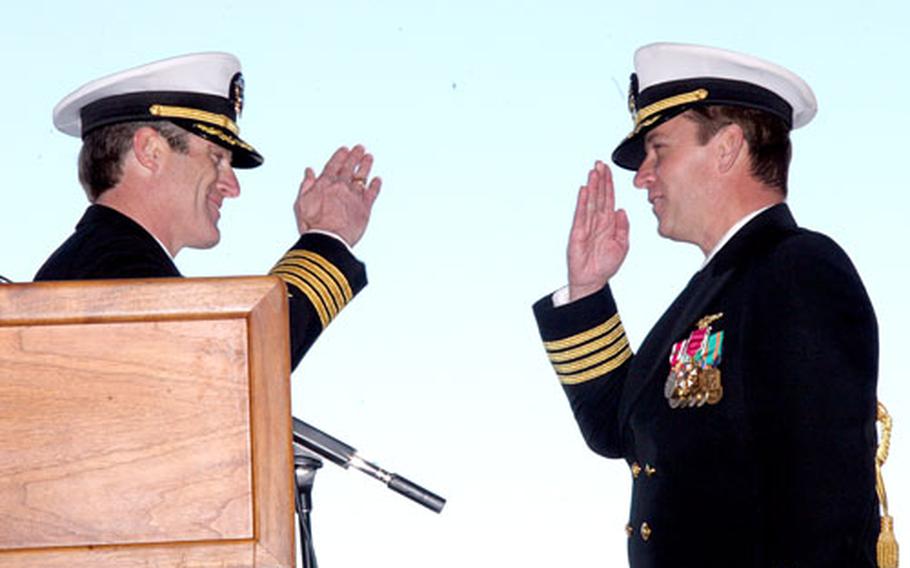 NAVAL AIR FACILITY ATSUGI, Japan &#8212; Before a vividly clear backdrop of Mount Fuji, Capt. Reed A. Eckstrom bid farewell Thursday to the base he commanded for three years and welcomed Capt. Justin D. Cooper II as his successor.

&#8220;The command won almost every award possible,&#8221; Kelly said at the change-of-command ceremony.

In addition to earning a Legion of Merit, Eckstrom was recognized Thursday with an award from local businesses with the Japan-U.S. Goodwill Society.

Local mayors, other Japanese politicians and military leaders attended Thursday&#8217;s ceremony, as did nearly every U.S. Navy commander in the region.

Eckstrom deflected the praise, giving credit instead to those around him.

Eckstrom leaves this week for a staff position with Commander, Naval Installations in Washington.

Cooper, also a naval aviator, comes to Atsugi after a yearlong National Security Fellowship at the John F. Kennedy School of Government at Harvard University.

After taking command Thursday, Cooper promised to continue Eckstrom&#8217;s duties: helping the air wing and other commands maintain readiness, upholding the quality of life for sailors and families and maintaining links to local communities.

Cooper faces a base in transition. Under a proposed U.S.-Japan forces realignment, several air components at Atsugi may be relocated to Marine Corps Air Station Iwakuni in coming years.

As the equivalent of a small-town mayor, Eckstrom had his share of difficulties and achievements over his three-year tenure.

Along with a near-constant flow of letters and petitions from neighboring communities protesting jet noise and night landings, Eckstrom faced other bilateral challenges.

In July 2004, a helicopter flying from Atsugi to Yokosuka Naval Base dropped a box of bullets over Yokohama. In December 2004, part of an F/A-18 Hornet jet fell off and lodged in the roof of a building in Fujisawa. The following August, a Sea King helicopter made a precautionary landing at a beach in the same city.

But there were good times, too: A sailor saved a Japanese man off base after a fiery crash in May, Atsugi community members participated in myriad local festivals off base and Japanese turned out in huge numbers to open-base events.

To Eckstrom, his role as commander was seldom dull.