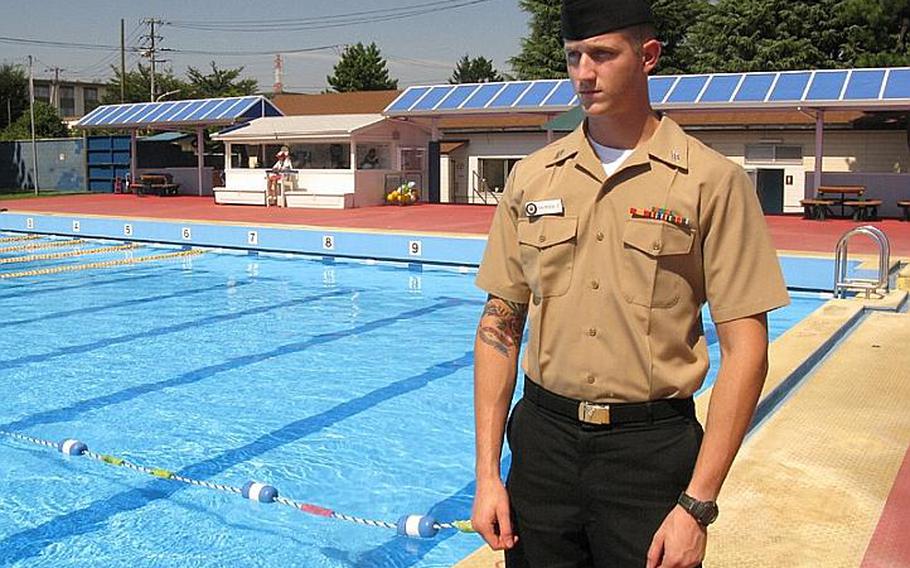 Buy Photo
Seaman Colin Colfescu, a Navy corpsman, returns to the Naval air Facility Atsugi pool where he aided a 7-year-old Japanese boy who was floating unconscious in the pool Aug. 29. Colfescu, who had been off-duty and swimming at the time along with other corpsman, helped resuscitate the child. The child survived after spending time in a Japanese hospital. Colfescu was recognized with the Navy and Marine Corps Achievement Medal for his efforts. (Erik Slavin/Stars and Stripes)

NAVAL AIR FACILITY ATSUGI, Japan &mdash; Seaman Colin Colfescu had been swimming laps for an hour or so when he took a break outside of the lanes, in the family section of Atsugi&rsquo;s outdoor pool.

It was yet another 90-degree day Aug. 29, a perfect day to cool off at the pool for perhaps as many as 100 people on that Sunday afternoon. And it was a day where Colfescu&rsquo;s actions in saving the life of a Japanese boy would eventually bring him the Navy and Marine Corps Achievement medal.

Amid the crowd, Colfescu saw the child floating in the pool, face down. Others might have thought the child was holding his breath, exploring the depths.

Nope, couldn&rsquo;t be, thought Colfescu, a Navy corpsman. The boy&rsquo;s back was arched oddly upward &mdash; and even when a conscious person floats in the water, they make tiny movements.

&ldquo;Someone who was just looking down, wouldn&rsquo;t look like (he did),&rdquo; said the 21-year-old Colfescu.

As lifeguard Sousuke Mori pulled the unconscious boy from the water, Colfescu swam across the width of the pool and launched himself out.

They laid the boy down by the side of the pool. Mori gave the boy rescue breaths, while Colfescu gave him chest compressions.

&ldquo;On the second chest compression, I was looking for a grimace,&rdquo; he said. &ldquo;I&rsquo;m 185 pounds, so a small boy &hellip; he should have felt it.&rdquo;

There was no response from the boy.

Seaman Apprentice Sean Rider, also a corpsman, had been snoozing in a lawn chair by the pool when he heard Colfescu shout his name. The urgency in Colfescu&rsquo;s voice had Rider running to the boy&rsquo;s side in seconds.

&ldquo;When I got there, the boy was still completely out and had a distended abdomen,&rdquo; Rider said.

The boy soon responded, but not entirely the way the two corpsmen had hoped. He began frothing at the mouth.

Colfescu stopped chest compressions and leaned the boy over on his side, putting him in the best position to keep his airway clear.

Soon, the boy began throwing up &mdash; in this case, a good sign. He was coming back.

When the base ambulance came, the boy was loaded onto a spine board and given oxygen. His vital signs responded.

A few minutes later, a Japanese ambulance came and took the boy to Kitazato University Hospital.

The whole incident happened in less than 10 minutes. The boy was later released with a clean bill of health, Navy officials said.

U.S. Naval Hospital Yokosuka, which oversees the Atsugi clinic, did not release the child&rsquo;s name, citing privacy concerns. The Japanese hospital declined to discuss the incident.

Looking back on it, Colfescu and Rider both said that without their medical equipment and facilities, they were in a tough spot.

&ldquo;There was only so much I could do out here in my swimming trunks,&rdquo; Colfescu said, &ldquo;but you just keep going.&rdquo;

The native of Colorado Springs, Colo., is quick to defer credit to his fellow corpsmen, the lifeguard, the ambulance responders and the doctors at the hospital. His commander, Capt. Mike Warrington, is just as quick to turn much of the credit back in Colfescu&rsquo;s direction.

&ldquo;He was very humbled by this experience &hellip; and that makes you feel even better about it,&rdquo; Warrington said.