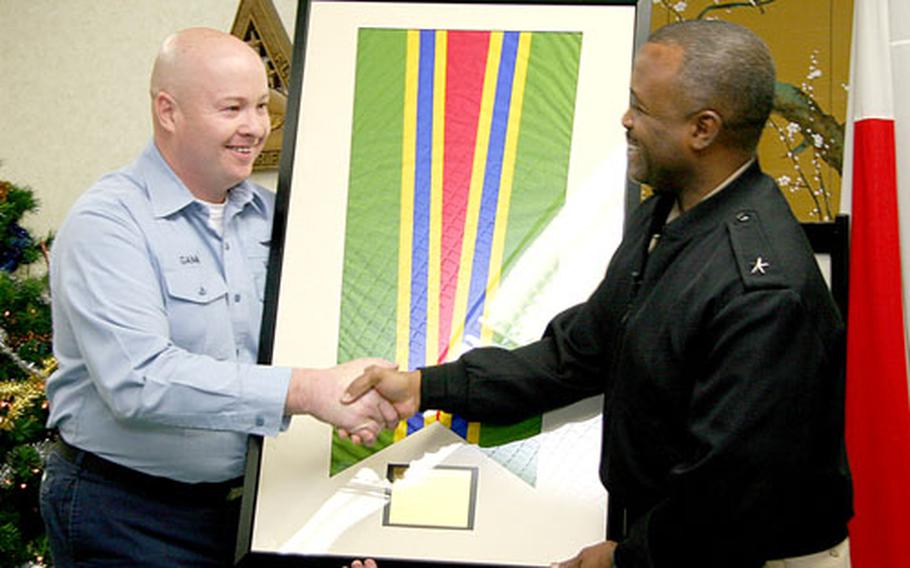 Commander Fleet Air Western Pacific ensures parts, people and supplies get where Navy aircrews need them anywhere in what the Navy has designated as the command&#8217;s area of responsibility. That includes several countries and eight time zones, the world&#8217;s largest.

During the buildup to operations Enduring Freedom and Iraqi Freedom, the command managed about five times more work than usual. To commend those who made it happen, Navy leaders gave the command a Meritorious Unit Commendation this week.

From Sept. 11, 2001, to Dec. 31, 2003, the period for which it was recognized, the air logistics command supported five carrier battle groups and six Marine Corps Expeditionary Strike Groups.

Command personnel relocated a maintenance depot from Diego Garcia to Bahrain and handled supply requests for all Navy and Marine Corps air assets in the 7th and 5th Fleets, including in the Pacific and Indian oceans and the Persian Gulf.

The Atsugi-based command consists of divisions for scheduling, logistics, operations, weapons and maintenance. It&#8217;s led by Rear Adm. Arthur Johnson, who is based in Misawa and also commands both the 7th Fleet and 5th Fleet Patrol and Reconnaissance Force.

Unit members find parts, move equipment, pay bills and do some repairs for hundreds of aircraft in the region. The command must coordinate with visiting ships and units from other areas and other countries where supplies might be shipped to or through en route to squadrons often desperate for parts for repairs.

During preparations for war, the command was responsible for getting the war-fighters everything needed for contingencies as well as regular maintenance. That meant keeping track of supplies, scheduling flights to move supplies and anticipating how to connect with ships and units on the move.

Although unit officials put in paperwork for the MUC more than a year ago, they learned they earned the award just recently and held a ceremony Monday.

The unit consists of about 500 people spread throughout its operations area. They all can wear the MUC ribbon or add a star if they have one already, Church said.