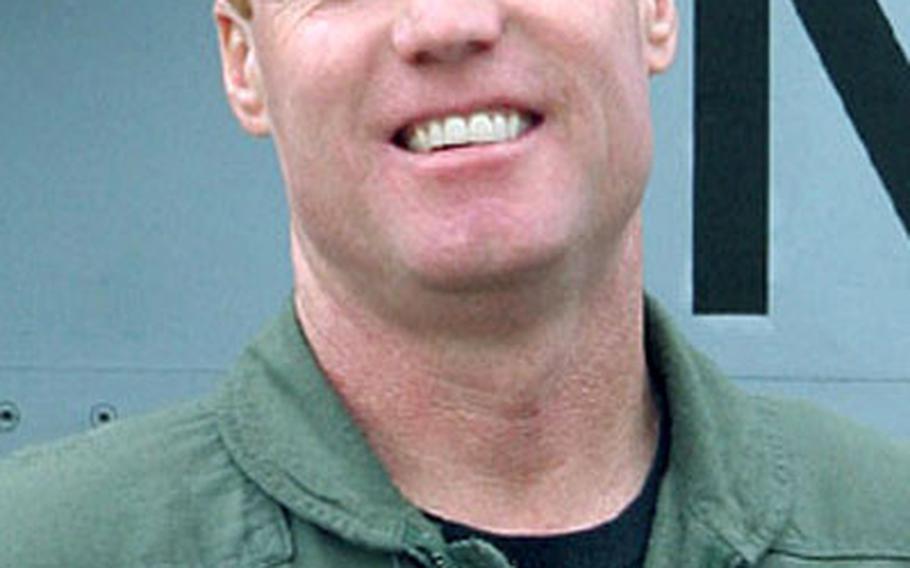 Navy Cmdr. Kevin Mannix didn&#8217;t expect to lead one of the most popular and recognizable Navy symbols, the Blue Angels flight demonstration team.

In 1986, Mannix graduated from a Merchant Marine Academy in Bronx, N.Y., with a computer science degree and little knowledge about Navy assets above the waterline.

He soon realized that job wasn&#8217;t exactly what he was looking for.

The same year, the world was treated to one of the most significant cinematic achievements yet, at least in the eyes of naval aviators: Tom Cruise&#8217;s classic flying movie &#8220;Top Gun.&#8221; It would influence hundreds of future pilots of the time, Mannix said.

Off to flight school he went, expecting to be a helicopter pilot. But his scores were high enough to join the ranks of the most prestigious fliers, and he soon found himself in the cockpit of the high-flying A-7 Corsair attack jet.

Mannix stayed with the Corsair &#8212; including flying combat missions in the Gulf War &#8212; until 1991 when he retrained on the F/A-18 Hornet. With the Hornet, he later came to Naval Air Facility Atsugi as first the executive officer and later the commanding officer of the Royal Maces. In the fall of 2003, the entire squadron transitioned to the Super Hornet and became VFA-27.

It was there that Mannix saw the Blue Angels were looking for a new face to lead the group. They were seeking pilots with command experience from the 1986-88 flight group.

He initially didn&#8217;t even plan to apply. His wife persuaded him to try, suggesting he didn&#8217;t have anything to lose.

But there he was with the finalists, most of whom he knew from flight training.

But he had the right background and under his leadership his squadron had a very good year. They told him on the spot he would be the next person to lead the famous group, which includes about 120 people.

Mannix said he was just numb upon hearing the news.

The new job carries many new challenges. Besides basic command and flight pressures, the team is always in the spotlight.

Attached to the USS Kitty Hawk with Carrier Air Wing 5 there have been few opportunities to show people what you do, he said.

The Blue Angels unit was formed to demonstrate top flying skills. Its primary objective today is recruitment &#8212; showing people the fun side of the Navy.

Mannix said he loves to fly but loves the Navy and its sailors more. He&#8217;s happy to have a chance to show people the nicer side.

Still, the flight training and practice is extremely rigorous. And being such a public figure will be unusual.

Best of the Best

His squadron&#8217;s achievements are part of the reason Cmdr. Kevin Mannix believes he was selected to lead the Blue Angels flight demonstration team.

And the unit has the honors to prove it. In the past few weeks, the Naval Air Facility Atsugi squadron, part of Carrier Air Wing 5, has earned:

Commander Naval Operations Safety &#8220;S&#8221; award for safety in calendar 2005; a Battle &#8220;E&#8221; for safety, efficiency and readiness; Association of Naval Aviation McClusky Award for Operational and Tactical Excellence; and the Golden Anchor for Retention Excellence.

According to the squadron&#8217;s Web site: A Blue Angels flight demonstration exhibits choreographed refinements of skills possessed by all naval aviators. It includes the graceful aerobatic maneuvers of the four-plane Diamond Formation, in concert with the fast-paced, high-performance maneuvers of its two Solo Pilots. Finally, the team illustrates the pinnacle of precision flying, performing maneuvers locked as a unit in the renowned, six-jet Delta Formation.

The Blue Angels are scheduled to fly almost 68 air shows at 35 locations in the United States during the 2006 season. Last season brought out more than 17 million spectators. Since its inception in 1946, the Blue Angels team has performed for more than 414 million fans.