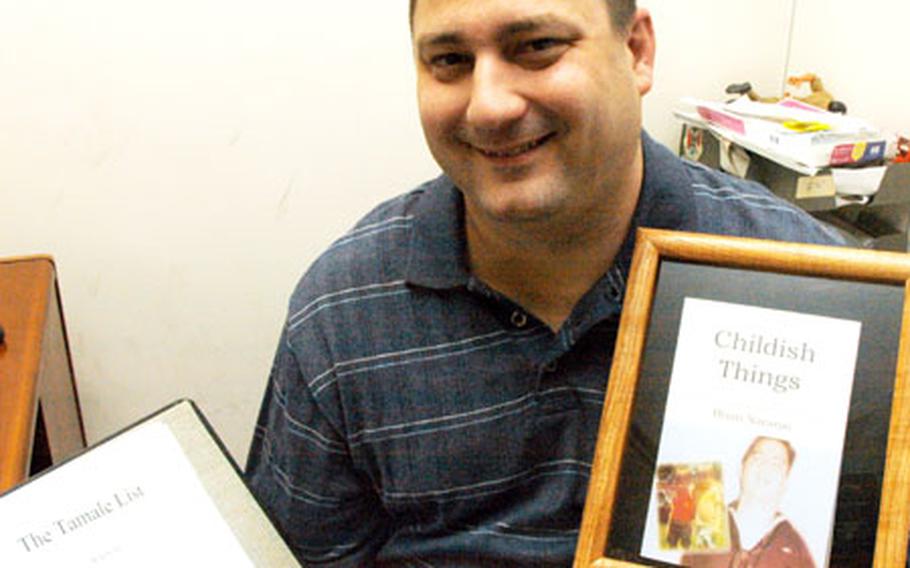 Naval Air Facility Atsugi civilian Brian Naranjo wrote two novels in two years after almost a decade of dragging his feet. The experience has been invaluable, Naranjo said, and he now aims to write a new book every 18 months. (Allison Batdorff / S&S)

Naval Air Facility Atsugi civilian Brian Naranjo wrote two novels in two years after almost a decade of dragging his feet. The experience has been invaluable, Naranjo said, and he now aims to write a new book every 18 months. (Allison Batdorff / S&S) 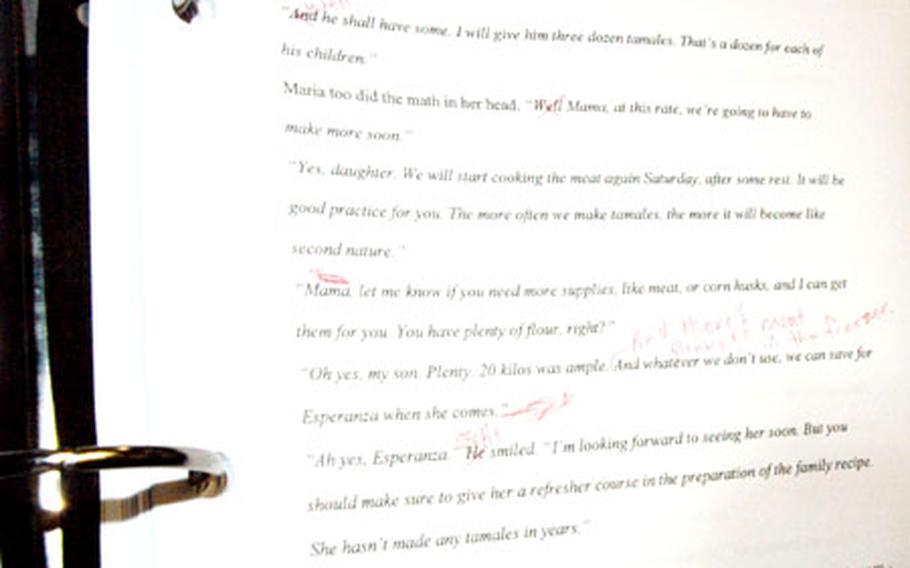 The red pen is a novelist&#39;s best friend. Naranjo shows a piece of the process of writing his new book "The Tamale List," which he said already is getting nibbles from publishing agencies. (Allison Batdorff / S&S)

After all that came an onslaught of rejection letters. &#8220;Childish Things&#8221; is a semi-autobiographical story of a directionless teen named Kevin and his time before and after Navy boot camp, as he hangs out with his sick, but raucous, cousin Eugene. (Naranjo was active duty in the Navy for years before taking his current job as Atsugi&#8217;s public affairs officer.)

Naranjo self-published &#8220;Childish Things&#8221; in March 2006 through an online publishing house and has sold 500 copies so far; it&#8217;s on the shelves at Atsugi&#8217;s Navy Exchange and available online. Sales have brought in just $2,000 but self-publishing was a million-dollar experience, he said.

The title combines Naranjo&#8217;s Mexican heritage and love of cooking. Naranjo&#8217;s personal tamale list means if you do something nice for him, he may show up at your door, &#8220;covered in flour carrying something wrapped in foil that smells awesome,&#8221; he said.

The novel follows the first Mexican family that moves into an all-white neighborhood. Although community members may live on &#8220;Hacienda Court&#8221; and make regular stops at Taco Bell, they harbor doubts about their new neighbors. There&#8217;s still a thread of Navy in the book, as one of the main characters is a Navy veteran and named after Atsugi&#8217;s NEX manager, Naranjo said.

Though he just finished it last month, a trial run of 30 e-mails yielded 12 agencies that wanted sample pages of Naranjo&#8217;s book. Last week, Naranjo was asked to send his entire manuscript and synopsis to a publishing agency.