Atlas robot shrugs when bullied and gets back up 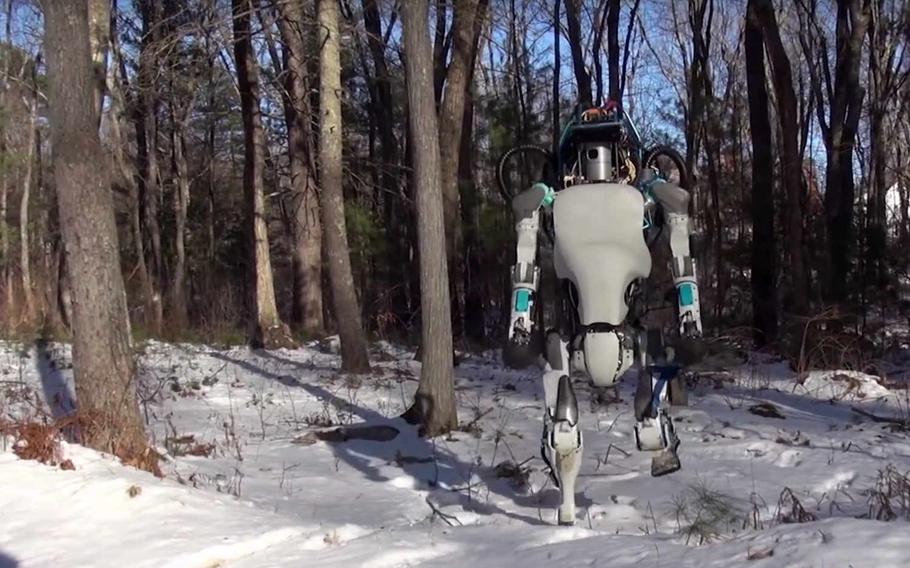 Robotics engineering firm Boston Dynamics has updated Atlas, one of its more advanced robots, with new sensors that allow it to operate outdoors with greater maneuverability. This newest model is human-sized, weighing in at 180 pounds and measuring roughly 5 feet 9 inches in height. Screenshot courtesy of Boston Dynamics ()

A new video of a military-funded robot is turning heads for a display of humanlike agility that has some in a panic.

Could the Atlas Next Generation robot be the end of manual labor? Probably not anytime soon, given the multimillion-dollar price tag.

But the latest version of the Atlas humanoid robot, developed by Boston Dynamics with technology partially funded by the Defense Advanced Research Projects Agency, or DARPA, has made impressive leaps forward since it debuted in 2013.

Now, in a video posted by Boston Dynamics, social media is abuzz with what this almost graceful robot can do.

In its latest display, the 5-foot-9-inch, 180-pound Atlas can walk through snowy woods on uneven terrain, load warehouse shelves and bounce back after being bullied. After a Boston Dynamics worker knocks Atlas down with a hockey stick, it gets on all fours and slowly springs back up, sort of like a human.

Impressive, but still too slow to put an infantryman out of work.