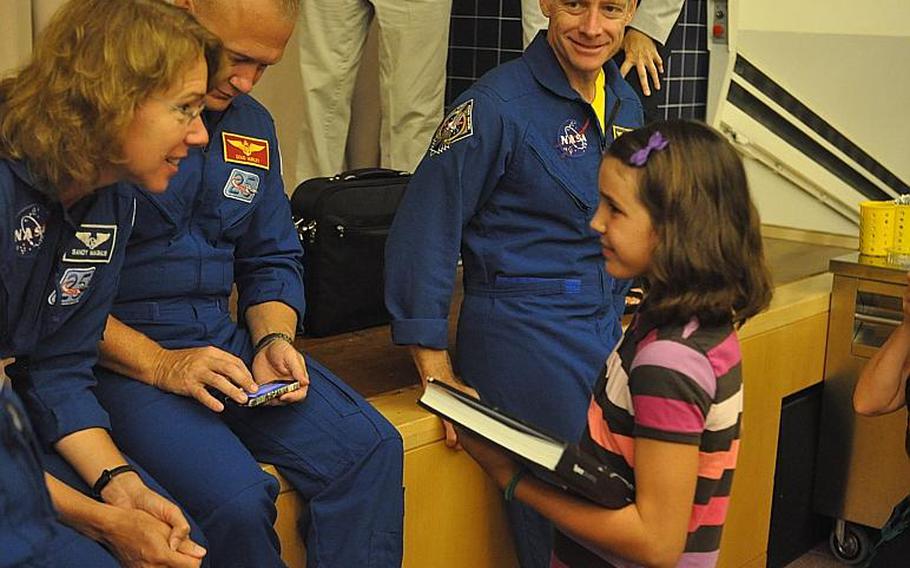 Buy Photo
Space Shuttle Atlantis crewmember Sandy Magnus talks with Julia Gabel, a fifth-grader at Aviano Elementary School during the four-member crew&#39;s visit to Aviano Air Base on Friday. The astronauts are heading back to the States after visiting U.S. bases in Italy and Turkey the past two weeks. (Kent Harris/Stars and Stripes)

Buy Photo
Space Shuttle Atlantis crewmember Sandy Magnus talks with Julia Gabel, a fifth-grader at Aviano Elementary School during the four-member crew&#39;s visit to Aviano Air Base on Friday. The astronauts are heading back to the States after visiting U.S. bases in Italy and Turkey the past two weeks. (Kent Harris/Stars and Stripes) Buy Photo
Sandy Magnus, one of the four crewmembers aboard the last U.S. space shuttle mission in July, answers a question Friday at Aviano Elementary School. The astronauts have toured U.S. bases in Turkey and Italy for the past two weeks and are headed back to the States, where they&#39;ll continue to promote NASA to the American public. (Kent Harris/Stars and Stripes) Buy Photo
The last crew of the Space Shuttle Atlantis - Chris Ferguson, Rex Walheim, Sandy Magnus and Doug Hurley - laugh at mixed response after Ferguson asked if students at Aviano Elementary School were glad to be back in class after summer vacation. (Kent Harris/Stars and Stripes)

AVIANO AIR BASE, Italy &mdash; Students whose parents work for the 31st Fighter Wing are used to watching jets soar into the sky. On Friday, a group of elementary students got to meet some really high fliers: The astronauts who flew the last U.S. space shuttle mission wrapped up a tour of U.S. military facilities in Turkey and Italy with visits to Aviano schools.

&ldquo;While you were enjoying your summer vacation, we were busy up in space,&rdquo; Chris Ferguson, commander of the Atlantis shuttle flight told students gathered at an assembly of third- to fifth-graders, most of whon raised their hands when asked if they wanted to be astronauts.

Fifth-grade aspiring astronaut Julia Gabel got to talk with crewmember Sandy Magnus and got all four crewmembers to sign her book.

&ldquo;She&rsquo;s going to be an astronaut one day,&rdquo; Magnus told Ferguson.

Students asked questions, including how the toilet situation works (it&rsquo;s complicated), if they can see the moon from up there (yes) and do you have to go to college to become an astronaut (most definitely yes).

Ferguson, a former Navy F-14 pilot, said answering such questions and meeting the public is part of the job. After flying back to Houston, Magnus &ndash; a civilian &ndash; and Doug Hurley &ndash; an active duty Marine F/A-18 pilot &ndash;will travel north to make an appearance at a NASCAR race. Ferguson and Rex Walheim &ndash; a former Air Force officer &ndash; will get a few days off.

Now that the space shuttle mission has ended, the astronaut program is in a state of flux, Ferguson said. After reaching its high point with 149 astronauts in 1998, it&rsquo;s down to 60 now and has been &ldquo;decreasing rapidly,&rdquo; he said.

It&rsquo;s not that astronauts don&rsquo;t believe in NASA or the space program, he said. For pilots like himself, riding to the International Space Station on a Russian space ship is not the same. Still, he said he fully supports NASA and the continued exploration of space.

&ldquo;It&rsquo;s very hard to go and present the case that we have to go to Mars when the country is $14 trillion in debt,&rdquo; he said. &ldquo;It&rsquo;s a hard thing, because it takes years for these things to happen, and politicians and people want quick results.&rdquo;

If the students at Aviano were voting, however &hellip;