At Yokota, joy and relief as three-month deployment ends A senior airman returning home from deployment is greeted by his four children during a welcoming ceremony at Yokota Air Base. (Karen J. Tomasik / Courtesy U.S. Air Force)

A senior airman returning home from deployment is greeted by his four children during a welcoming ceremony at Yokota Air Base. (Karen J. Tomasik / Courtesy U.S. Air Force) 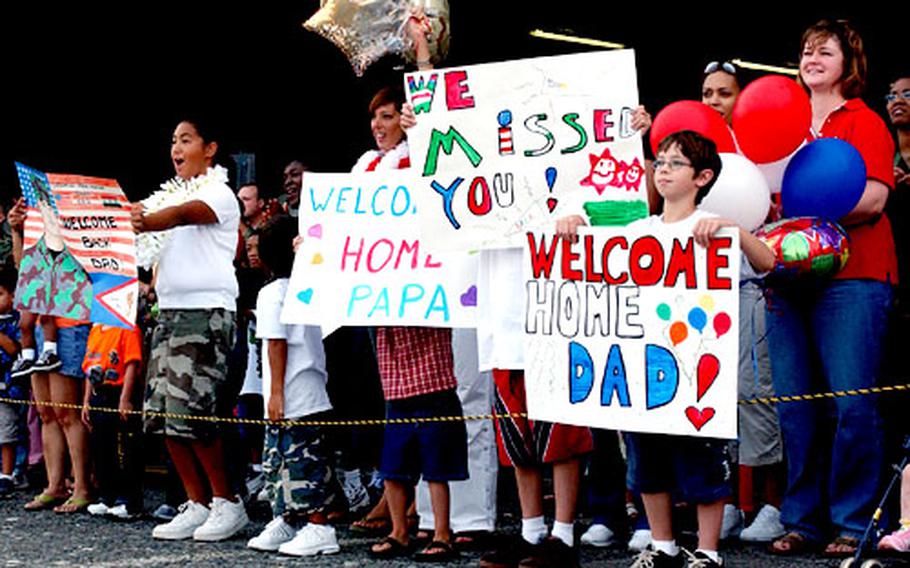 YOKOTA AIR BASE, Japan &#8212; Troops from Yokota and Kadena air bases were back on familiar turf Thursday, fresh off a deployment in which they boosted forces fighting the war on terrorism primarily in Iraq and Afghanistan.

A passenger plane routed straight from Southwest Asia stopped first at Kadena Air Base on Okinawa, then touched down at Yokota just before 4 p.m. In all, about 125 airmen returned to the Pacific.

Most left three months ago, as part of a scheduled rotation within the Air Force&#8217;s Aerospace Expeditionary Force cycle. All filled various support roles in Operation Iraqi Freedom and Operation Enduring Freedom, spread across the Middle East region.

The servicemembers, decked out in desert battle-dress uniforms, emerged from the plane one by one at Yokota as a public-address announcer reeled off 90 names.

After making their way through a line of senior military officials led by Col. Mark Schissler, the 374th Airlift Wing commander, they poured onto a section of the flight line just behind Building 400, where they were greeted by co-workers, family and friends.

Jennifer Allar, cradling her 2-year-old son, Ethan, couldn&#8217;t wait to get a glimpse of her husband, Derek. She said the last 90 days included a few nervous moments, especially when news from Iraq hit the airwaves.

When Derek Allar, a senior airman with the 374th Civil Engineer Squadron, finally located his family Thursday, the initial reunion between him and his son was a bit awkward.

Yoko Morgan, with 4-year-old daughter Alicia in tow, tried to maintain composure while waiting for her husband, Stefan, a technical sergeant with the 374th Services Division, to step off the plane.

A few of his buddies turned out to greet him.