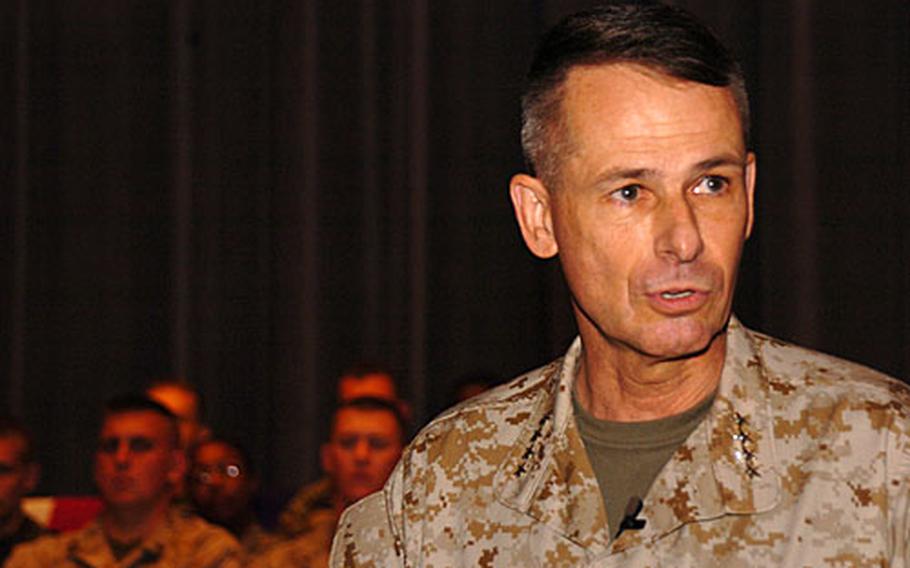 Marine Corps Gen. Peter Pace, chairman of the Joint Chiefs of Staff, conducts a town hall meeting Friday at Yokota Air Base, Japan, with U.S. servicemembers from installations across the Kanto Plain. (Christopher B. Stoltz / S&S)

YOKOTA AIR BASE, Japan &#8212; The U.S. had to go to war in Iraq and Afghanistan due to a failure of the international community to produce political or economic solutions, the chairman of the Joint Chiefs of Staff told a gathering of servicemembers Friday.

Marine Corps Gen. Peter Pace, who served at Yokota as U.S. Forces Japan vice commander from 1994 to 1996, said ways to fight the war on terror might change someday but he believes Congress will continue to fully fund the nation&#8217;s fight despite political shifts in Washington.

&#8220;Congress is having a very open, rigorous dialogue right now,&#8221; Pace said in response to an airman&#8217;s question about the Democratic push for troop withdrawal and how that could affect war resources. &#8220;Despite that dialogue, Congress has funded this war the way we&#8217;ve asked it to be funded.

Pace met with roughly 1,000 airmen, soldiers, sailors and Marines from bases across the Kanto Plain during his last expected visit to Japan before he retires Oct. 1.

Pace said the U.S. must strike a balance in how it conducts the war on terror, adding that the international community has to unite in recognition of the threat: &#8220;Over time, people will realize what a threat this is and do something about it.&#8221;

He pointed to Iraq&#8217;s formerly embattled Anbar province, saying local leaders made a stand by teaming with the coalition to rid the region of al-Qaida.

Asked by a servicemember how the U.S. should define victory, given the ancient roots of terrorism, the chairman said it wouldn&#8217;t come via a &#8220;signing of a document.&#8221;

Pace said Iranian influence in Iraq is a concern. U.S. troops are aggressively pursuing such elements as they engage in nightly raids against terror networks around the country, he added.

Pace told the servicemembers at Yokota there&#8217;s a reason countries such as China, Korea and Taiwan aren&#8217;t grabbing headlines.

Pace, a Vietnam War veteran who turns 62 in November, has been either chairman or vice chairman of the Joint Chiefs for the past six years.

Defense Secretary Robert Gates had said he intended to nominate Pace for another two-year term as chairman. But leery of a hostile Senate confirmation hearing, he announced in early June that Pace would retire.

Adm. Mike Mullen, the chief of naval operations, was confirmed as Pace&#8217;s successor by the Senate on Aug. 3.