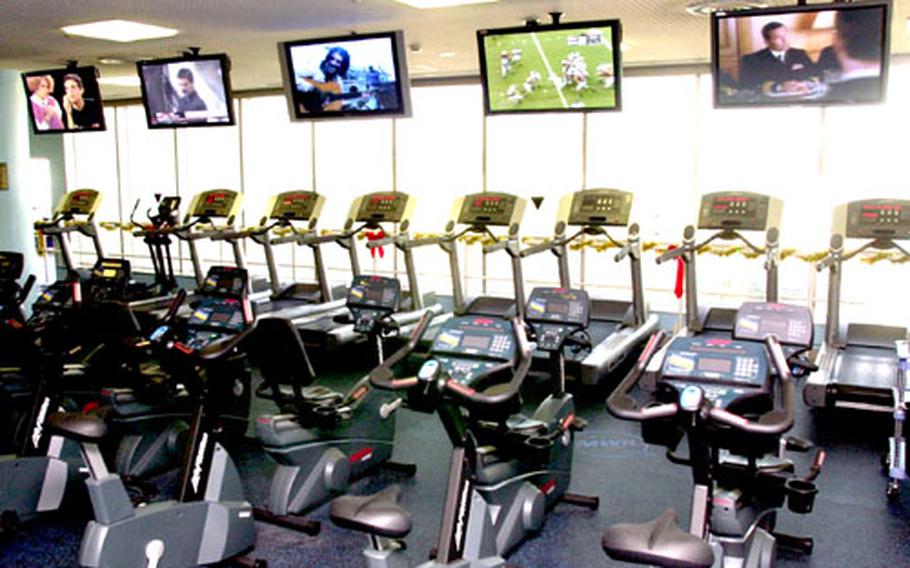 While working out at Yokosuka Naval Base, Japan, people now can enjoy a new cardio theater system that allows exercisers to plug in and watch any of five large-screen televisions. (Jim Schulz / S&S)

Soon, treadmills will have individual mini screens for DVDs.

Technology is part of the base&#8217;s goals to encourage more exercise with an array of new entertainment options.

Listen to music or watch a music video. Or stick with a classic television show.

The athletic department spent about $70,000 to install the cardio theaters at the Fleet and Thew gyms as well as Negishi&#8217;s gym.

The theaters include the five big-screen televisions at Fleet Gym and 35-inch flat screens elsewhere. They&#8217;re wired to exercise bicycles and machines in the area.

The bikes have headphone jacks so users can plug into any of the screens from their machine to listen.

The headphones only work while the machine is in use, another incentive to get people moving, Rhodus said.

The theaters aren&#8217;t set up near treadmills since runners have difficulty looking up at a screen from a treadmill, Rhodus said.

For them, the athletic department will install 17-inch screens and DVD players on 22 treadmills and other machines that aren&#8217;t not near the cardio theater.

The treadmill systems will play DVDs, CDs or television.

The gyms also might have music video DVDs to lend to exercisers, Rhodus said. There&#8217;s no specific date set yet for the treadmill systems to be installed.

The new electronics and about 150 new cardio machines installed last year were paid for with surplus cash from base nonappropriated funds generated from on-base sales.

Since Rhodus joined the athletic department about a year and a half ago, he has overseen $2 million in renovations to the fitness facilities at Yokosuka and its housing areas, including $100,000 to renovate Negishi&#8217;s gym in May.

The push is part of a Navy and Department of Defense initiative to create fit fighters everywhere.