At Yokosuka, new and soon-to-be fathers learn the ABCs of child care 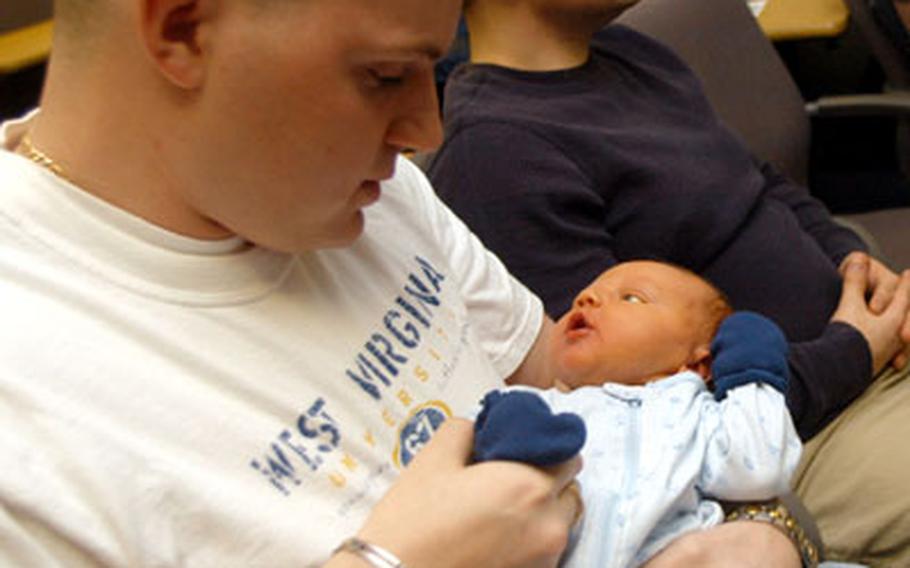 Seaman Thomas Hartman got to attend Boot Camp for New Dads with his son Andrew, as the baby arrived two weeks earlier than planned. Hartman allowed Andrew to be a prop in getting new dads used to baby-handling. (Allison Batdorff / S&S)

Seaman Thomas Hartman got to attend Boot Camp for New Dads with his son Andrew, as the baby arrived two weeks earlier than planned. Hartman allowed Andrew to be a prop in getting new dads used to baby-handling. (Allison Batdorff / S&S) 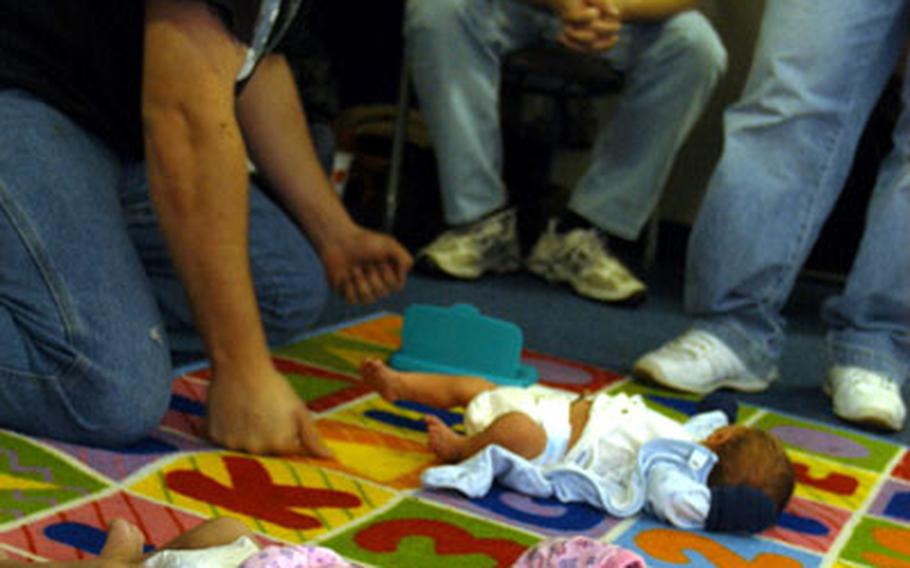 Who&#39;s next to change her nappie? The 11 men at Boot Camp for New Dads at Yokosuka Naval Base on Tuesday each practiced changing diapers and holding babies to prepare for their first child. (Allison Batdorff / S&S)

YOKOSUKA NAVAL BASE, Japan &#8212; Dads in Diaperland need to know this: Girl babies get wiped front to back. Boy babies frequently erupt in urine geysers.

These and other helpful hints were drilled into expecting and new fathers at a &#8220;Boot Camp for New Dads&#8221; at Yokosuka Naval Base on Tuesday. The three-hour class gives first-time Navy fathers their &#8220;Pampers-qualification.&#8221;

&#8220;Boot Camp&#8221; gets new fathers together in groups of six to 12 to discuss their paternal concerns about deployments, bad father figures, tempers and baby budgeting.

It also gives them hands-on newborn experience and familiarizes them with terms like &#8220;jaundice&#8221; and &#8220;baby acne.&#8221; Two babies were used in the class, one brought in by a facilitator and the other by a new father.

They aren&#8217;t experts &#8212; dads need to discover their own parenting style, the facilitators said.

What they do is give advice, Coston said.

Think of your crying baby like troubleshooting an engine that won&#8217;t start, advises Coston.

The program has been used in Yokosuka for three years, but it&#8217;s rooted in a movement that started as &#8220;Bootee Camp&#8221; 16 years ago, according to the program&#8217;s Web site at www.newdads. com. The program now is run through New Fathers Foundation, Inc., a stateside nonprofit organization.

Camps have been offered in Spanish since 2001; the program has graduated more 150,000 fathers worldwide since its inception, according to the Web site.

Is the class like real boot camp? Nah &#8212; attendance is voluntary and there&#8217;s no yelling. But it still can be frightening, said Chief Petty Officer Jason Chudy.

Boot Camp for New Dads is held on the first Tuesday of every month. For more information, call 243-3372.