At well’s bottom, a wish for community 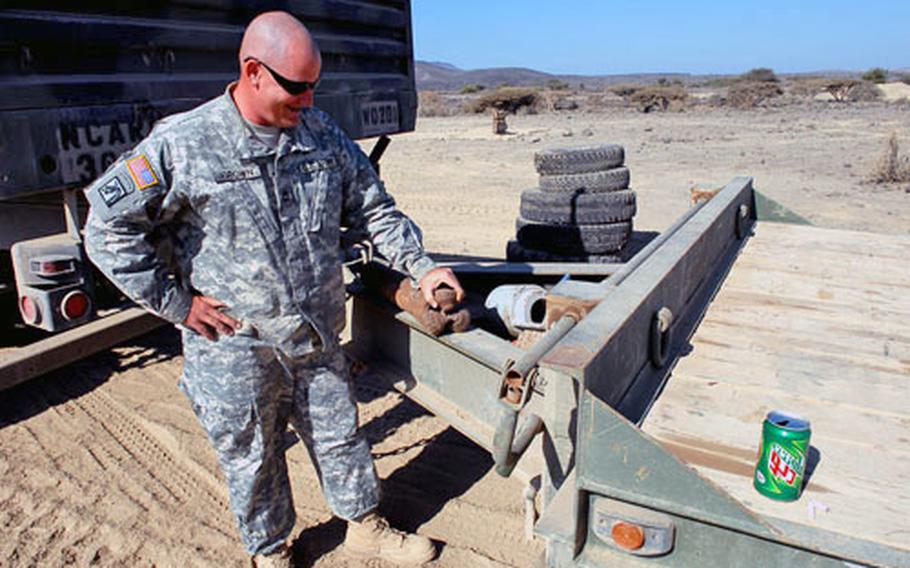 Sgt. 1st Class William Brown looks at a wornout drill bit that had been used to dig a well near a remote village in southern Djibouti. (Zeke Minaya / S&S)

Sgt. 1st Class William Brown looks at a wornout drill bit that had been used to dig a well near a remote village in southern Djibouti. (Zeke Minaya / S&S) 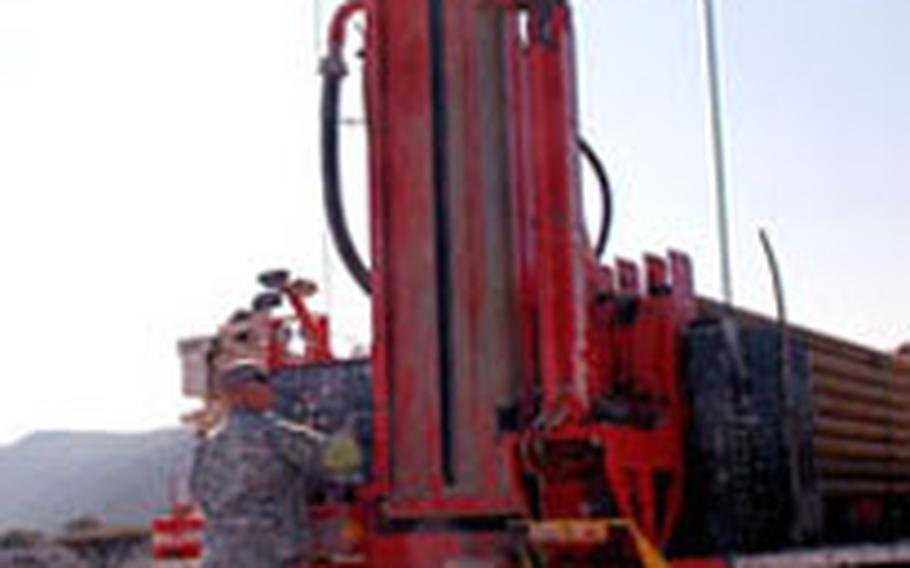 Sgt. 1st Class William Brown, with the National Guard’s 1132nd Well Drilling Detachment works on a well near a remote village in southern Djibouti on Thursday. When completed, the well will serve the roughly 600 to 800 local residents who live in the area or migrate through. (Zeke Minaya / S&S)

CARTA, Djibouti &#8212; One look at the craggy lunar landscape of this impoverished village in southern Djibouti and it&#8217;s no surprise that villagers here routinely go three to four days without water and instead depend on goat and camel milk.

One of the few hints of greenery among the squat, spiny acacia trees and black chunks of basalt rock is a miniature Christmas tree, tucked in the corner of a sun-bleached military tent.

The 1132nd Well Drilling Detachment out of Morrisville, N.C., are doing their best to bring a bit of yuletide cheer to this dusty corner of Djibouti, about 50 miles west of Camp Lemonier, home to the Combined Joint Task Force-Horn of Africa.

But the National Guardsmen&#8217;s more lasting contribution to the herders and nomadic tribes that call this sun-blasted land home is still a few days from completion. The well-drillers, accompanied by a contingent of Guam National Guardsmen, are reaching about 520 feet below the scrubby, hilly desert and tapping into an aquifer.

The U.S. military mission in the Horn of Africa calls for promoting stability in the fragile region with the building of schools, medical assistance and military to military training. But without addressing the basic need for water, any other ambitions would fall flat, said U.S. Navy Lt. Cmdr. Abby Goss, head of the task force&#8217;s water resource program.

Building a well is not as simple as finding a bald patch of dirt and then pounding into the ground, Goss said.

The 33-year-old native of Illinois cites the example of a well in Kenya that was destroyed by locals because they insisted it was damaging their culture. The well was placed too close to a village, eliminating the long walk the women had to the former water source, Goss recalled.

The men of the village were angered because they lost one of their few opportunities to court a future wife, Goss remembered.

Before any drilling was done at the site west of Camp Lemonier, Brown approached village elders, explained the task force&#8217;s intentions and then asked permission to proceed, he said.

Brown said that the placement of the well was carefully thought out. &#8220;We don&#8217;t want to negatively impact the culture of a village or allow one tribe or one group to take control. [The elders in the area] are very receptive to us. They want it to be done.&#8221;

After receiving the cooperation of local leaders, Brown and his well drillers began to fight their way through the rugged layers of rock and sediments. Most wells in the United States are 250 to 300 feet deep, Brown said. In Djibouti, well drillers must typically go down 550 to 1,000 feet through layers of dense rock, he said.

Brown said, however, that recent technological advances in well drilling have dramatically slashed dig times. &#8220;It took us about three weeks to dig this well,&#8221; he said. &#8220;Before, the last well of similar depth took about three months.&#8221; The well drillers dig about 12 hours a day, Brown said.

With a well that deep, Brown said the pump would be outfitted with wind-generated power.

Once their work is done, the well will serve roughly 600 to 800 people who live or migrate through the area, health threats like cholera will be controlled and talks of other community enhancing projects can begin, Brown said.

A group of Navy Seabees are doing similar work in Kenya, Goss said. In all, the task force has drilled dozens of wells throughout eastern African since 2003.