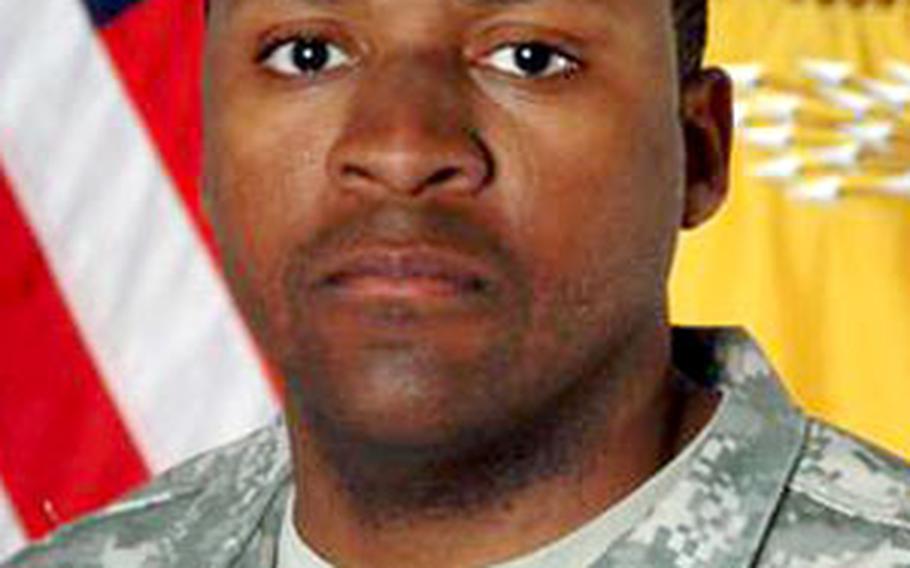 Sgt. 1st Class Randy Lewis Johnson, 34, of Washington, died Sept. 27 in Baghdad when a roadside bomb exploded near his vehicle. A member of the regiment&#8217;s 2nd Squadron K Troop, Johnson, along with his wife, Claudia, and sons Devin, 5, and Aaron, 2, had lived in Vilseck for one year.

&#8220;(He) always gave top priority to training his men, ensuring they were prepared, he never complained to his soldiers about personal hardships, and was a consummate professional &#8230; although difficult, the members of 3rd Platoon will continue to fight. They will gather strength from (his) memory,&#8221; Capt. Raul Vasquez, 2nd Squadron&#8217;s rear detachment commander, said of Johnson at the service.

Vasquez also told of a recent visit he made to Landstuhl Regional Medical Center to visit a soldier from Johnson&#8217;s platoon who was wounded the day Johnson died.

Both Vasquez and Rickard spoke of the quality soldier that Johnson was. How he, after enlisting at age 21, excelled and shot through the ranks as an infantryman.

&#8220;Johnson was a soldier&#8217;s soldier, a warrior and an outstanding noncommissioned officer. He was born in the shadow of the home of our Constitution and believed strongly in serving our country,&#8221; Rickard said.

In addition to his wife and sons, Johnson is survived by his father, Randy, eight brothers and two sisters.

Close to 4,000 2nd SCR soldiers deployed from Vilseck in August on a 15-month rotation. Four have been killed.

A memorial service for two of the fallen, Sgt. Robert T. Ayres, 23, of Los Angeles, and Sgt. Randell Olguin, 24, of Ralls, Texas, is 11 a.m. Monday at the Rose Barracks chapel.