At Vicenza, turning tragedy into resolve The traditional tribute to fallen soldiers, with rifles, helmets, boots and dog tags, honors the nine soldiers from 2nd Battalion, 503rd Infantry Regiment (Airborne), 173rd Airborne Brigade Combat Team who were killed Sunday in fighting in Afghanistan. More than 400 people crowded into the chapel at Caserma Ederle in Vicenza on Friday for a memorial service. (Sandra Jontz / Stripes)

The traditional tribute to fallen soldiers, with rifles, helmets, boots and dog tags, honors the nine soldiers from 2nd Battalion, 503rd Infantry Regiment (Airborne), 173rd Airborne Brigade Combat Team who were killed Sunday in fighting in Afghanistan. More than 400 people crowded into the chapel at Caserma Ederle in Vicenza on Friday for a memorial service. (Sandra Jontz / Stripes) 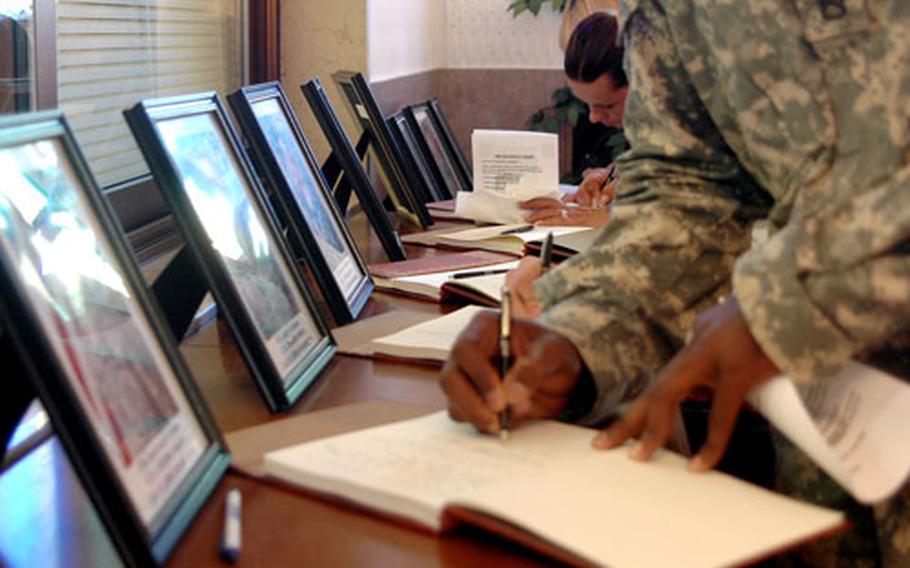 People lined up Friday to sign guest books provided for each of the nine soldiers killed Sunday in heavy fighting in Afghanistan. (Sandra Jontz / Stripes) 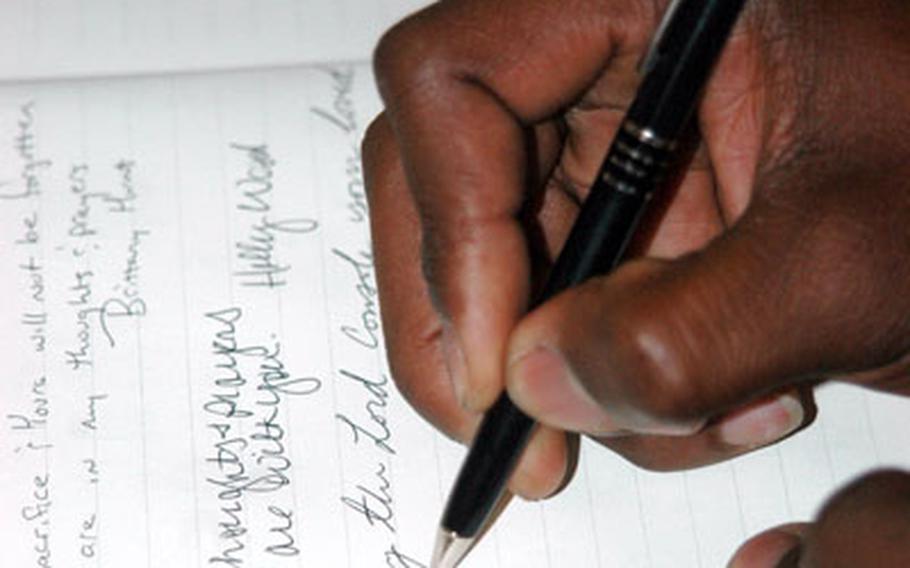 "May the Lord console you ..." wrote Staff Sgt. Meeklin Jeanbaptise in the guest books for the nine soldiers. (Sandra Jontz / Stripes)

Three times, 1st Sgt. Patrick Fatuesi called out to each of nine soldiers, first by rank and last name, then adding their first names, and finally beckoning the soldiers by their full names.

Each time, an eerily somber silence met his beckoning.

More than 400 people gathered at the Caserma Ederle chapel on a rainy Friday to honor the nine men of 2nd Platoon, "Chosen Company," 2nd Battalion, 503rd Infantry Regiment (Airborne), 173rd Airborne Brigade Combat Team, who were killed Sunday in a firefight in Afghanistan.

"We feel angry, even bitterly so, because our young men lived better lives, had higher hopes and more perfect love, than their attackers," Chaplain (Lt. Col.) Stevan Horning said during the invocation. "Please help us to not become weary of doing what is good; renew our courage so we complete the mission you assign each of us."

And so they gathered to remember the nine as men, not just as soldiers.

Like platoon leader 1st Lt. Jonathan P. Brostrom, who had a passion for Hawaii and surfing and wanted to be remembered as wearing surfboard shorts and sandals. "Happy-go-lucky, yes, yet he passionately competed in scuba diving, video games &#8230; and Ranger skills," Horning said. "He so delighted in competition that he invented contests so he could win them."

Four soldiers who knew the fallen best took to the lectern to provide snippets of their friends &#8212; at times, choking back tears.

Brostrom was his platoon, remembered Staff Sgt. John Otfinoski. "It was true, we needed you and you needed us," he said to his former leader. "I&#8217;m not sure how we&#8217;re going to get along without you."

Spc. Sergio S. Abad could "light up a dark room with his crazy humor," Spc. Christopher Gross said of the 24-year-old soldier. He "always went out of his way to do his best."

Cpl. Matthew B. Phillips had a weird sense of fashion, and once donned a "wig and wedding dress &#8212; not very pretty I might add &#8212; to celebrate his upcoming marriage," Spc. Richard Ingledue recalled. He often dressed crazily: "Everyone laughed and that&#8217;s why he did it."

Cpl. Jason M. Bogar learned from his family to protect others. The "compassion, kindness and tenderness he exhibited toward the younger and more vulnerable people around him had no use for self-indulgence," Horning said. "While the role of a tough warrior in Afghanistan, he welcomed every opportunity to participate in humanitarian missions, especially those helping children."

Sgt. Israel Garcia, one of three married soldiers among the nine, had deployed twice to Iraq before joining the Vicenza-based battalion. The Mexico native was motivated by family, church and the ideals of the Army. He led by example, Otfinoski said, such as when a young soldier couldn&#8217;t speak English well, he helped by making the evenings "reading time."

Cpl. Jason D. Hovater, who married his childhood sweetheart, was a "PT stud and machine who never got tired," remembered Spc. Ian Eads, and hung a poster of a young Arnold Schwarzenegger at the foot of his bed for inspiration.

A fanatic for strength and muscles, Cpl. Pruitt A. Rainey had a reputation in high school of being "the gentle giant," and maintained that in the Army. He was big on pulling practical jokes, like filling his buddies&#8217; boots with shaving cream or stealing their clothes when they showered, and his friends in turn called him "over-nursed baby" or "big polar bear," Eads said, eliciting some laughter from the crowd.

At age 20, Cpl. Gunnar W. Zwilling was the youngest, but more mature than his years, Ingledue said. "He had the gift of laughter that was extremely contagious.

"I&#8217;ll never forget and stop loving," Ingledue said, pausing to choke back tears, "the little brother I had in Gunnar Zwilling."