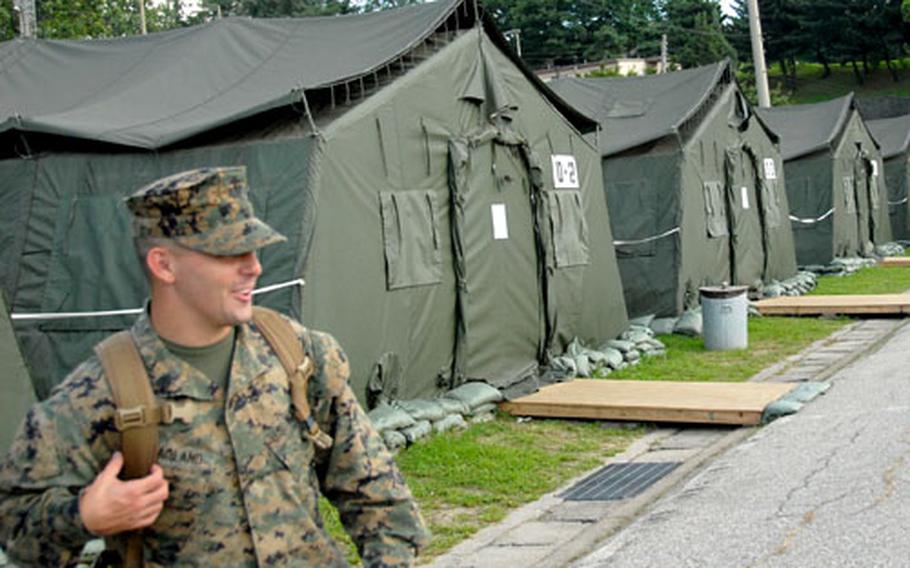 YONGSAN GARRISON, South Korea &#8212; The air outside may have been as hot and thick as Korean porridge Monday, but you wouldn&#8217;t know it by looking at the soldiers relaxing in armchairs in air-conditioned comfort in front of a big-screen TV.

And inside a tent, no less.

&#8220;Half of them are falling asleep in here,&#8221; said Sgt. 1st Class Robert Thoms, who oversees a temporary network of tent cities across U.S. Army Garrison Yongsan.

Hundreds of visiting U.S. troops from across the Pacific and the United States are living in these life support areas &#8212; LSAs, for short &#8212; during Ulchi Focus Lens, one of two major exercises held in South Korea each year.

Inside the rows of tents at Camp Coiner that house nearly 370 troops, the biggest problem was the constantly running air conditioning units freezing up.

Most of the repairs were minor and were fixed quickly, Thoms said.

Inside the Morale, Welfare and Recreation tent, troops could watch DVDs inside a darkened &#8220;movie theater,&#8221; use the phones to call the United States and check e-mail on one of four computers.

&#8220;They hop on that as soon as they can to talk to their families back home,&#8221; Thoms said. Staff Sgt. Christopher Ruiz, mayor of Camp Coiner&#8217;s LSA, said visiting troops want to know how to get around Seoul and how to go downtown, so they can go gift shopping.

&#8220;Their biggest question is, how do I use this phone card when I call the United States?&#8221; said Ruiz, who is stationed at Camp Carroll.

The most popular stop in the MWR tent: the popcorn machine.

Naumow said he had enjoyed meeting members of different branches of service during his week at the LSA.

Army National Guard Maj. Desiree Morasco of Pennsylvania said she liked arriving to an already-erected tent, instead of having to build a camp from scratch like her unit did in Kuwait.