At Tokyo Lost and Found, wallets to ashes lie unclaimed Some of the exotic items stored at the Tokyo Lost and Found office in December, 1975. (Bob Wickley/Stars and Stripes)

Some of the exotic items stored at the Tokyo Lost and Found office in December, 1975. (Bob Wickley/Stars and Stripes) 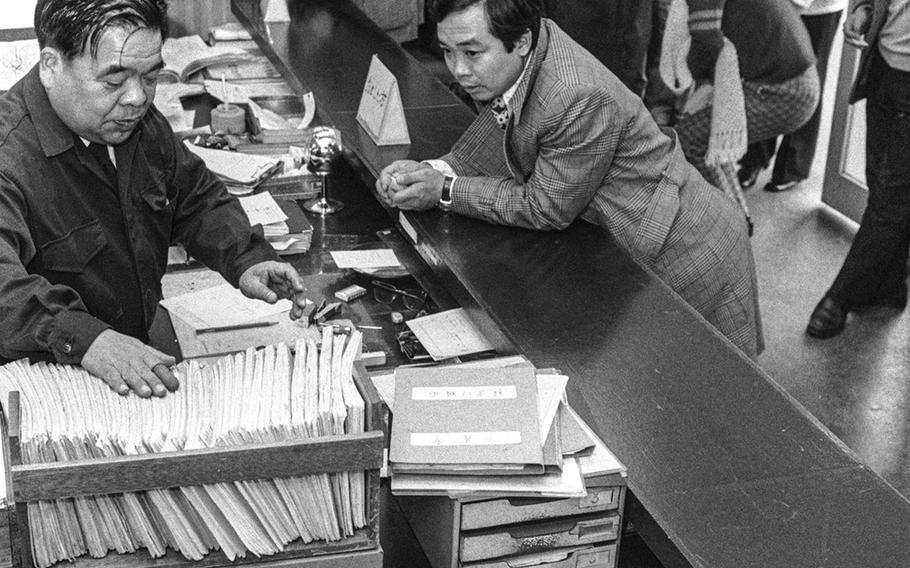 A clerk helps a customer at the Tokyo Lost and Found office in December, 1975. (Bob Wickley/Stars and Stripes) Tsutome Sekine and some of the expensive items, including a large Speed Graphic-type camera, in storage at the Tokyo Lost and Found office in December, 1975. (Bob Wickley/Stars and Stripes) 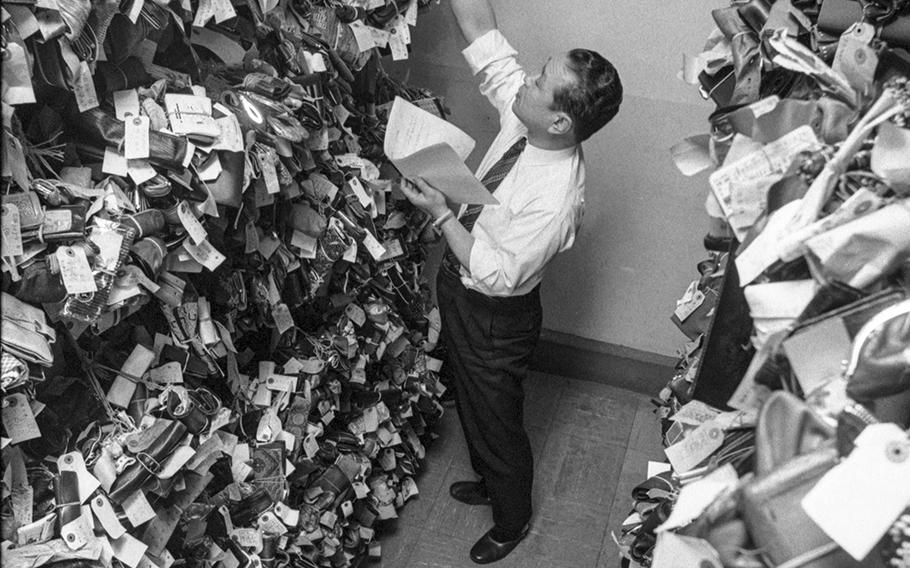 Masao Iizuka, with the lost and found section of the Tokyo Metropolitan Police Dept., searches for an umbrella among shelves that hold 120.000 of them left on trains and buses, in taxis and department stores, in December, 1975. (Bob Wickley/Stars and Stripes)

TOKYO — At times, the 120,000 umbrellas in the Tokyo Metropolitan Police Department's vast Lost and Found Center seem to reflect the personalities of their owners.

The pretty little one, once obviously owned by a woman, seemed to hang aloofly away from a dark and shabby one that smelled of alcohol — as if not wanting to be seen in such unseemly company.

But the owners of the umbrellas, along with those of 70,000 purses and wallets, 11,000 cameras, 1.1 million yen (about $3,800) and two boxes of human ashes, all had something irritatingly human in common — they were careless and forgetful.

All of these objects, and many more, came into the Lost and Found in the Aoyama district of Tokyo this year. Most were left on seats or in cargo racks on subways and trains. Often, they were just dropped and abandoned as passengers raced for trains during hectic rush hours.

And in at least two cases, says Masao Iizuka, director of the center, careless losses reflected another and more regrettable human trait — callousness. Instead of adorning a dignified place in a family shrine, Iizuka says, a box of ashes was found in a locker at Ikebukuro Station; another was just dropped and left at Tokyo Station.

"How could people be so disrespectful of something so important?" Iizuka says. But if the objects in his lost and found sometimes tell unfavorable things about the owners, he adds, they show the sunny side of human nature, too — the way people go out of their way to turn in things, sometimes quite valuable, when they could easily pocket them with no one being the wiser.

But, he says, this may come more out of tradition than honesty, reaching back to the time the Tokugawa Shogunate ruled Japan and enforced honest behavior the hard way — anyone who provably profited from someone else's loss could have his head chopped off.

Some people, Iizuka says, have bad days and wind up double losers — often coming in to claim a lost piece of property and then forgetfully leaving another in the Lost and Found.

Once, he recalls, an old man came in to a police station and told of losing 4,000 yen (about $16). He was so preoccupied with worry, Iizuka says, that he left another $1,000 in yen on the station counter.

"At least he left it there," smiles Iizuka, "and not on a bus or a train."

And sometimes, Iizuka says, losses, particularly money, show how times have changed in a Japan that was once flush but is now plagued by recession.

"A few years ago," he says, "people would find cheap property or money that could be traced to someone — something like three or four thousand yen. We would call the owners and they'd tell us, "That's all right. Give it to the person who found it.'"

Not anymore, Iizuka says. Money and even the most inexpensive property comes harder, and people want it back.

But for people who are patient, he adds, honesty can still be its own reward. Only 300 people showed up at the Lost and Found to claim property this year and after six months and 14 days, the finder can claim it — if he or she comes in within two months.

Otherwise, Iizuka says, the stuff is sold at auctions held four times a year — but only to licensed pawnbrokers and other dealers who will sell it again.