At the State of the Union, a Ranger leads the way 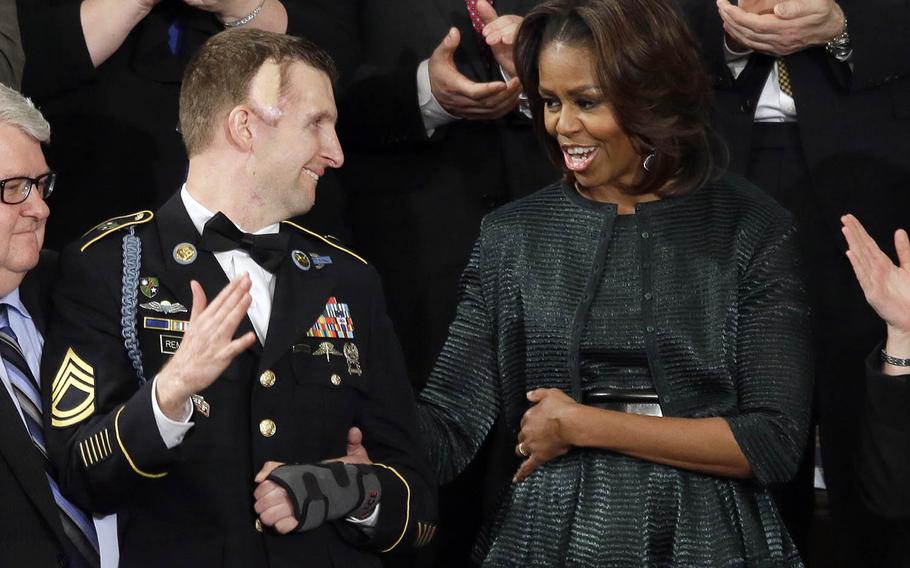 WASHINGTON — While Tuesday’s State of the Union address only lightly touched on military and veterans issues, a wounded Army Ranger provided the most memorable moment of the night.

Near the end of the hourlong speech, President Barack Obama singled out gallery guest Cory Remsburg, an Army Ranger seriously wounded in Afghanistan during his 10th deployment there in 2009, as an example of the unbreakable American spirit.

“Over the years, he’s endured dozens of surgeries and procedures, hours of grueling rehab every day,” Obama said. “But slowly, steadily, with the support of caregivers like his dad, Craig, and the community around him, Cory has grown stronger. And, day by day, he’s learned to speak again and stand again and walk again.

And he’s working toward the day when he can serve his country again. ‘My recovery has not been easy,’ he says. ‘Nothing in life that’s worth anything is easy.’”

The comments drew a standing ovation from lawmakers which grew when Remsburg struggled to his feet (with help from his father) to wave to the gallery. He gave a thumbs up and a smile when the president saluted him.

Remsburg could also be seen throughout the speech, sitting beside first lady Michelle Obama, thumping his hand on his chest in lieu of applause because of injuries to his left arm.

The president and the wounded soldier have met several times before. Remsburg was part of a honorary detail at a 2009 D-Day commemoration in France, and shook hands with the commander-in-chief. Less than a year later, Obama saw him again, this time while he was in a coma recovering from a roadside bomb attack.

In August, Obama visited him third time, to track his recovery. The president recounted the experience at the Disabled American Veterans annual convention a few days later.

“He wanted to show me something,” Obama said. “And he leaned out of his chair. And he reached out and grabbed his walker. And with the help of his parents, he pulled himself forward and he stood up. And he looked at me, and he gave me a sharp salute.”

Veterans groups hailed Remsburg’s appearance as a reminder for civilians that the wounds of war will linger far after the fight in Afghanistan is over. Obama hailed him as a role model for the country.

“Like the Army he loves,” he said, “like the America he serves, Sergeant First Class Cory Remsburg never gives up, and he does not quit.”