'At the end of the day, we all end up supporting the infantry' 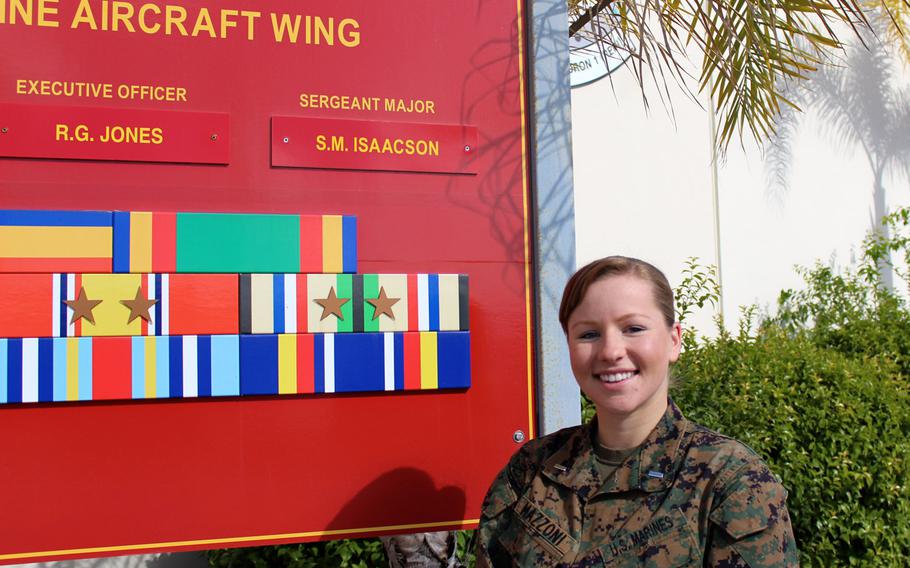 Just one year after she returned from an Afghanistan deployment, 1st Lt. Susannah Mazzoni is back in Afghanistan with I Marine Expeditionary Force (Forward). Mazzoni is an air defense control officer, but volunteered to deploy with I MEF (Fwd) as the assistant operations officer for Marine Aircraft Group 38. (Jennifer Hlad/Stars and Stripes)

MARINE CORPS AIR STATION MIRAMAR, Calif. — First Lt. Susannah Mazzoni hadn’t even finished her military occupational specialty school in July 2012 when she left to deploy to Afghanistan for the first time. Now, just a year after she returned from that tour, she’s back in Afghanistan with I Marine Expeditionary Force (Forward).

Mazzoni is an air defense control officer, but volunteered to deploy with I MEF (Fwd) as the assistant operations officer for Marine Aircraft Group 38, an aviation command and control unit that includes Marine Air Controls Squadron 1 and other units that control the airspace.

She said she asked for the job because she knew she would “do well and excel.”

Mazzoni’s job during the last deployment was in her job specialty, helping control the airspace outside the base. She was in Helmand province when Taliban fighters infiltrated Camp Bastion on foot, killing two Marines and destroying several aircraft.

And though that Marine unit wasn’t focused on retrograde and drawdown, the pace of things in the airspace did change over her time there, she said, especially in the winter, when there is traditionally less fighting. Many of the Marines’ aircraft also transitioned to the Air Force, she said.

“This deployment will give me the opportunity to see the larger picture of the air war in Afghanistan,” she said, and to be actively engaged in the retrograde effort, “bringing our Marines and equipment safely home.”

Mazzoni’s father was a Marine in Vietnam, and she grew up close to the home of Marine aviation in Pensacola, Fla., before attending the U.S. Naval Academy in Annapolis, Md.

She chose the Marine Corps for the leadership opportunities, she said, and likes that she has “a wartime job.” Still, she and one junior enlisted Marine were the only two women in her unit during her last deployment.

Mazzoni was in Afghanistan when the Marine Corps first offered the opportunity for new female Marine officers to attempt its notoriously difficult School of Infantry, but she said she would probably not have volunteered even if it had been an option.

“I do know myself and my limits,” she said. “I am very physically fit. However, being an infantry platoon commander would not have been at the top of my list, because I know my strengths and weaknesses. At the end of the day, we all end up supporting the infantry.”