At scene of Kabul attack, a view of different worlds 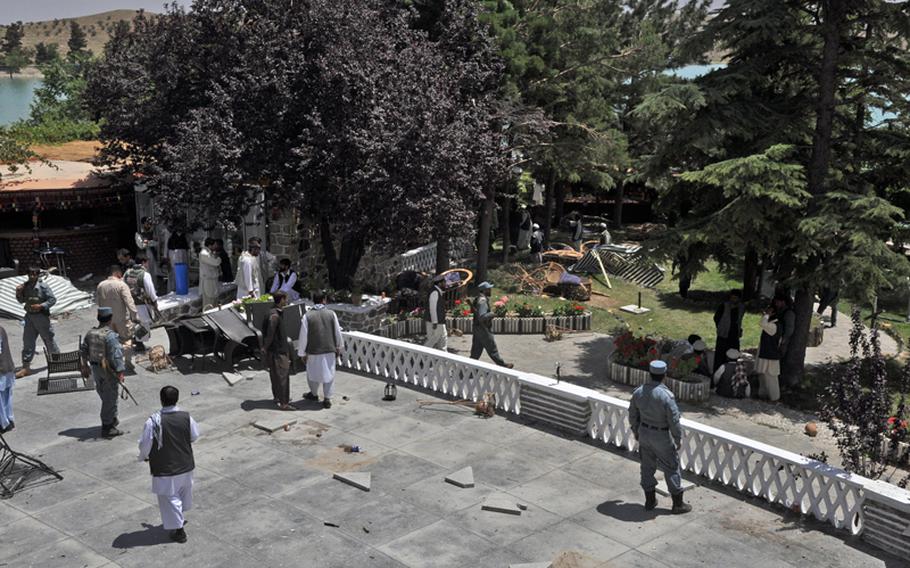 A Taliban spokesman said the Islamist militia targeted the resort in Kabul because it permitted guests to drink alcohol and engage in other activities proscribed by Islam. (Martin Kuz/Stars and Stripes)

A Taliban spokesman said the Islamist militia targeted the resort in Kabul because it permitted guests to drink alcohol and engage in other activities proscribed by Islam. (Martin Kuz/Stars and Stripes) 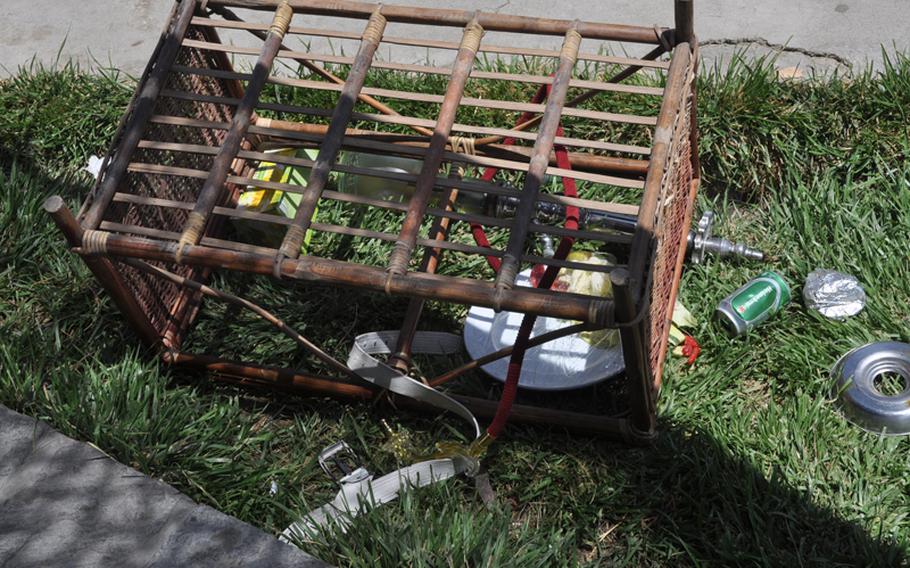 In Miami, confetti fell and the hometown crowd roared as LeBron James and his Heat teammates celebrated winning the NBA title Thursday night.

Almost 8,000 miles away in Kabul, where it was Friday morning, smoke rose from a burning building and gunshots snapped the air as a hostage crisis played out at a lakeside resort.

Despite the distance and time difference, the two worlds — First and Third — collided in that 140-character realm with the regrettable moniker: the Twitterverse.

At the time, along with about 20 Western and Afghan journalists, I was hunched beside a low stone wall bordering Qargha Lake on Kabul’s outskirts. Five armed militants had attacked the Spozhmai resort and hotel, less than a quarter-mile across the water from us.

As the insurgents traded gunfire with Afghan security forces, I scanned Twitter for details about the siege, which began late the previous night. I found a few relevant posts buried under a landslide of tweets and retweets exulting in Miami’s defeat of the Oklahoma City Thunder.

I follow a grand total of one sports-related Twitter feed; I didn’t care who won. But word of the Heat’s victory was unavoidable on the networking site, and while at that moment I found the news utterly inane, another thought soon arrived, one closer to a wish.

How wondrous it would be if Afghans could live in a country where something as trivial as a sporting event meant so much to so many.

The 12-hour standoff ended after Afghan forces had killed the assailants, who murdered 18 people, including 14 civilians. Afghan police and soldiers had earlier freed hundreds of hostages, many of them women and children.

The Taliban claimed responsibility for the ambush. A spokesman for the Islamist militia denounced the rambling resort as a den of “illicit fun” that attracts prostitutes, Westerners and foreign diplomats.

Afghan officials countered that the Spozhmai, located about 10 miles from central Kabul, appeals to families seeking weekend relief from the crush of the capital.

The carnage in the resort’s Spugmay Restaurant and outdoor dining area appeared to support the description offered by officials. The bodies of at least eight victims, all of them men and apparently Afghans, remained scattered across the grounds when authorities allowed journalists to enter.

The dead wore everyday attire. Some were clad in jeans or khakis and short-sleeve shirts, others in shalwar kameez, a customary Afghan ensemble consisting of a long-sleeve tunic and loose-fitting pants. This was not the finery of envoys and elites.

Their meals had been interrupted. Flat bread, bowls of soup and cans of beer sat on tables or had tumbled to the ground as the men lurched from their cushioned wooden chairs, hoping in vain to escape the bullets.

Seeing the bloodied corpses, their stiffened limbs twisted at unnatural angles, I remembered my visit the night before to L’Atmosphere, a restaurant in Kabul’s core district popular with Western expats.

I sat outside under soft light and leafy trees, enjoying a warm summer breeze that provided a subtle bass line to the melody of laughter from other patrons. For a couple of hours, the war felt far away.

I left a little before 11:30 p.m. Around that time, under soft light and pine trees, the guests at Spugmay Restaurant were relaxing beside Qargha Lake, chatting and laughing and perhaps savoring that same mellow breeze when they heard the first crack of gunfire.

The resort presented an easy and unlikely target. Insurgent attacks in Kabul over the past two years have taken aim at foreign embassies, military bases, Afghan ministry buildings and hotels in the tightly guarded heart of the city.

The Taliban’s assertion that the Spozhmai permitted guests to drink alcohol and engage in other activities proscribed by Islam suggests that, if the militia regains control of the government, the country will return to a brutal past.

The Taliban enacted a strict interpretation of Sharia, or Islamic law, during its rule from 1996 to 2001. It was a reign Western leaders condemned as barbaric, fraught with violent oppression of women, ethnic minorities and dissidents.

Not long ago, I spoke with Abdul Hakim Mujahid, the Taliban’s former ambassador to the United Nations. He now serves as the first deputy of Afghanistan’s High Peace Council, a panel charged with leading negotiations with the Taliban and other insurgent factions.

Mujahid told me that the country’s fledgling democratic government would need to revive Sharia to create any chance of forging a truce with the Taliban.

“They want a traditional Islamic government, which is what Afghanistan had for more than 1,000 years,” Mujahid said. “You can have a democracy, but not every democracy has to be the same.”

True. But if such a government would sanction the slaughter of innocents at a lakeside resort, I imagine it is a world that most Afghans do not wish to revisit.