At Samarra, return fire and rescue 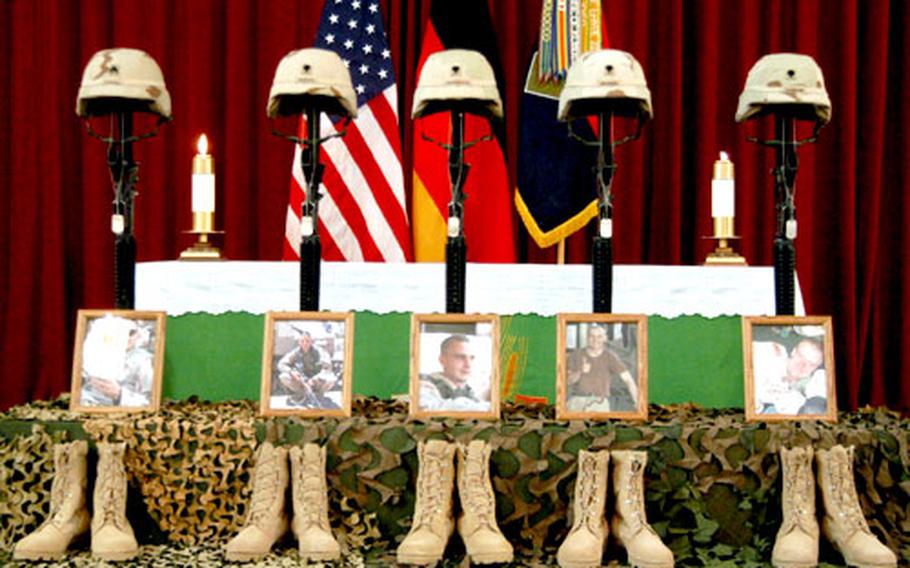 Editor&#8217;s Note: This is the final installment of a three-part series. See links to the first two parts at end of story.

The injured men of the 1st Battalion, 26th Infantry Regiment&#8217;s mortar platoon sat dazed and thirsty in the baking sun.

Their world had exploded around them. A suicide car bomber had sped toward the concrete barracks where the U.S. soldiers slept and detonated a bomb, leaving a smoking crater of rubble.

The mortar platoon, whose men had slept in the front of the two-room building, had borne the brunt of the blast. Of the 14 mortarmen present that day, four would die and five were seriously wounded. Only one other U.S. soldier died in the attack.

But the car bomb was only the first shock in a coordinated attack on the base. Now enemy mortars began raining down in the neighborhood, and rifle-toting guerrillas could be seen firing from a couple hundred meters away.

Pfc. Travis Wright, a junior member of the platoon, had escaped the blast because he&#8217;d been outside manning the radio. He was the only member of his seven-man squad not dead or injured.

Normally four-man teams run each counter-mortar gun: a pair of gunners to sight and aim the weapon like property surveyors, an ammo bearer to unwrap and carry the mortar rounds, and a team leader to direct fire.

That morning, Wright did all four jobs. He aimed one mortar shell after another at targets directed by his injured squad leader, Staff Sgt. Michael Broner. Broner had recovered enough to watch the platoon&#8217;s radar screen.

&#8220;He was a one-man mortar team,&#8221; said Spc. Matthew Campbell, 21, who had left the barracks to shave just three minutes before the explosion.

From the sandbagged crow&#8217;s nest on the roof of the main building, Pfc. Miguel Jauregui and Spc. Craig Guilbault fired away at the enemy troops they could see a few blocks away. They&#8217;d seen the suicide bomber drive onto the base but hadn&#8217;t been unable to kill him because of the steep downward firing angle.

When he wasn&#8217;t digging dead and injured buddies out of the wrecked barracks, Campbell was hauling ammunition to the roof so they could keep firing.

Reinforcements from the 1-26 Infantry and the 9th Engineer Battalion from Brassfield-Mora rushed in to help the besieged base and run missions into the city. Teams of Apache and Kiowa Warrior attack helicopters flew cover. One of the Kiowa Warriors launched a Hellfire missile into a house where four insurgents hid, killing all of them.

By late afternoon, the fighting ended with the Americans and their Iraqi allies still in charge of the base. But the rebels controlled the city. Three months later, they still do.

The injured men sweltered until everyone had been dug out. A convoy carried them to an aid station at their nearby base camp, Brassfield-Mora, the beginning of a trip that would take them to hospitals in Tikrit, Balad, Landstuhl and finally to Schweinfurt over the next four days.

Greene, who his friends said was partially paralyzed, ended up in a stateside hospital. The others went to W&#252;rzburg Army Hospital in Germany for stays of varying lengths, where U.S. Army Europe commander Gen. B.B. Bell greeted them July 19 and pinned on Purple Hearts.

Fulsome suffered a broken ankle and shrapnel wounds from head to toe. Broner&#8217;s eardrums were punctured and his wrist broken. Le&#8217;s body was lacerated with shrapnel wounds. One piece nicked his intestine, which prevented him from eating for a few weeks, and some wounds that refused to heal stretched his stay into August.

Terry&#8217;s jaw was dislocated, his eardrum blown out, and he was temporarily blinded but has recovered his sight. He remembers nothing from the time he fell asleep that morning until he woke up in the hospital next day. He still pulls pieces of shrapnel from his chest, his legs and even his eyelids.

Back in Samarra, Campbell&#8217;s adrenaline kept him going all that day, with only short breaks in an air-conditioned Humvee.

He slept long and hard that evening, but for the next few days, he got no rest. Even Valium offered little help.

Campbell and Wright now room together, along with two soldiers who transferred from the mortar platoon of the Schweinfurt-based 1st Battalion, 77th Armor Regiment &#8212; replacements for the dead and injured.

He came home to Schweinfurt in early August and spent two weeks of mid-tour leave with his German girlfriend. He flew back to Iraq on Aug. 17.

Campbell says three years of Army discipline &#8212; and one day of horror &#8212; have changed him from a sullen delinquent (he describes himself then as &#8220;a little thug&#8221;) into someone quite different.

Before his close call, he thought of war as thrilling, an adrenaline rush.

He&#8217;s not a religious man, but he&#8217;s spent a lot of time puzzling over why he left the barracks just a few minutes before the blast. His cot lay second from the front, next to Spc. Collier E. Barcus &#8212; the fifth fatality &#8212; and just a few feet from where the truck exploded.

Fulsome and Terry have both gone to the States to visit families. Le&#8217;s mother and sister flew to Germany, but he plans to see them later in California. Broner has been spending time with his wife, Cassandra, and four children, ages 9, 6, 4 and eight months.

All have shed blood in this war, and no one would accuse any of them of shirking. Yet all feel a nagging sense of guilt about being at home instead of Iraq.

Losing so many friends has given them a different feeling about sacrifice. Even after his hard work on that hot, bloody July morning, Campbell is not quite sure he deserves the looks of respect he sometimes gets from other soldiers who weren&#8217;t there that day.

&#182; Click below to read Parts 1 and 2 of this series:Part 1: 1st ID soldiers reflect on July suicide attackPart 2: Memories of July suicide blast, rescue at Samarra live on in 1st ID survivors

Family: Parents, Gregory and Sandra Barcus; one sister, one brother.

Enjoyed fishing and horseback riding after spending his last two high-school years at a boys&#8217; ranch in Wyoming. Friends said he longed for adventure and hoped some day to run his own ranch in the West.

Joined the Army after high school to save money and help support his family. Sold some of his goods to surprise his family with a visit home last Christmas. Described by friends as happy-go-lucky and a joker.

Spent eight years in the Marine Corps, joined Army in 2001 because he didn&#8217;t like civilian life. Hoped to open a sports bar back home in Indiana so he could give free drinks to friends and family.

Helped care for elderly people, including his grandmothers. During and after high school, worked as a cook for a caterer in his home time. Dreamed of being a paratrooper like his father, who served in Vietnam.