At Rhein Main, school's out forever 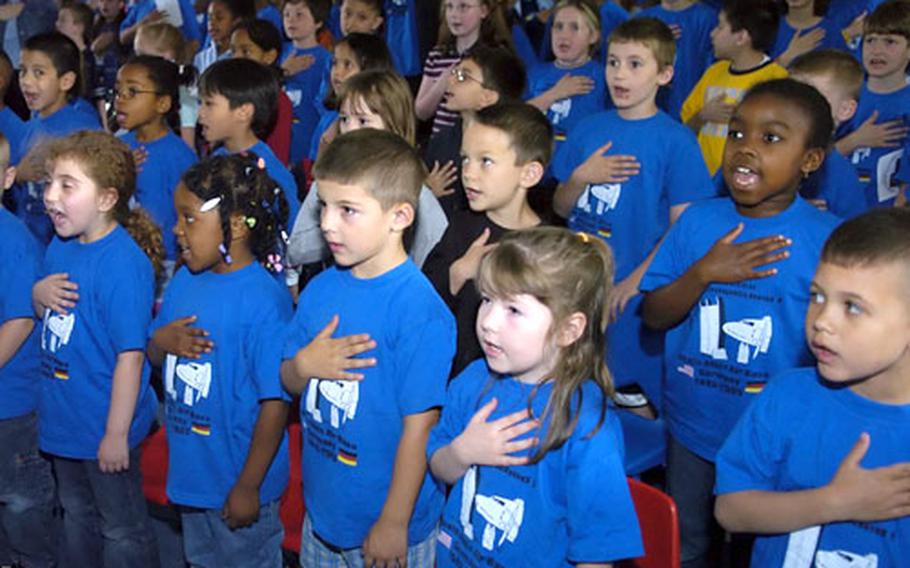 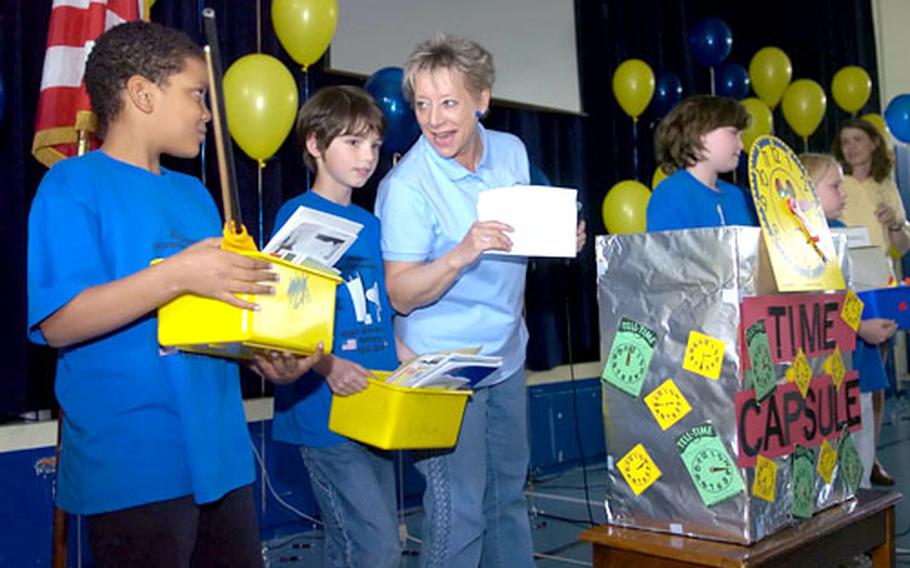 Regina Green, here with several students, explains the contents of a time capsule that will be placed in a museum in Wichita, Kan. (Raymond T. Conway / S&S) Members of the Ramstein Honor Guard lower the flag for the final time at Halvorsen Tunner Elementary-Middle School during the school&#39;s closing ceremony on Thursday. (Raymond T. Conway / S&S)

Halvorsen Tunner Elementary-Middle School pupils gave a final farewell to their school Thursday, one of the first buildings to close on the air base that is to be handed back to the Germans at the end of the year.

The last graduating pupils from Halvorsen Tunner shared special reflections and mementos with each other to remember a school that helped shape the lives of thousands of children in the past 56 years.

Charlotte Scharnweber, who has been teaching at Halvorsen Tunner for the past 36 years, said the assembly was the perfect ending to her career. She will be retiring once the school is officially closed Friday.

&#8220;It was great,&#8221; Scharnweber said as she helped children back into the school to pick up their books after the assembly.

A time capsule, loaded with books, area maps, school newsletters, and clues as to how community members lived their daily lives, were loaded into a cardboard box wrapped with foil.

Unlike many other time capsules, this one will not be buried near the school grounds since the building is slotted for destruction and is to be paved over to expand Frankfurt International Airport with hotels and shops.

Halvorsen Tunner&#8217;s time capsule will be sent to the middle of America, to a museum in Wichita, Kan., so all visitors passing through can see how Rhein-Main pupils lived when the capsule is opened 30 years from now.

Children from kindergarten to the eighth grade viewed photos, learned about the school&#8217;s history, and sang a song to the tune of &#8220;This Land is Your Land.&#8221;

The 218 pupils and 45 staff members sang the final chorus loud and clear, just before walking outside to lower the flag for the last time ...

Then, in a solemn ceremony with a color guard from Ramstein Air Base, the pupils, many holding yellow and blue balloons, stood in a horseshoe formation around the front of the flagpole next to the playground to watch the colors be retired.

&#8220;It&#8217;s sad, you know? It was a good school,&#8221; said Jessica Rojas, 14, after the ceremony. Jessica smiled about the last three years she attended Halvorsen Tunner. She said she will most remember such events as Splash Day, when firefighters came to the school and shot water out over it, or the yearly Law Day, when pupils participated in a mock trial.

&#8220;I made a lot of friends,&#8221; the eighth-grader said. &#8220;We always hung out during lunch and recess. Most of us were in the same class together, so we got to go on field trips together and get to know each other pretty well,&#8221; Jessica said. She will be moving with her family to Tampa, Fla.