At Remagen, soldiers become the 'newest link in the NCO chain' 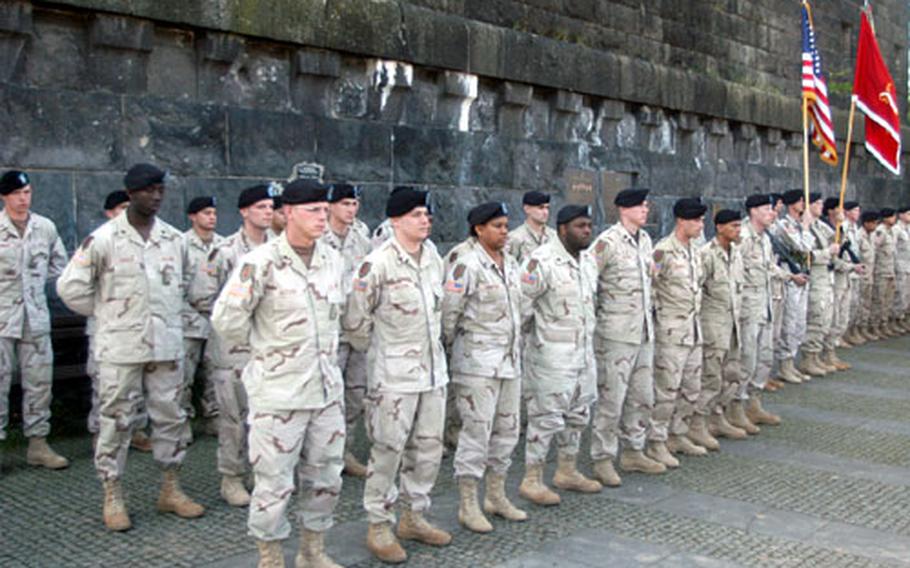 Members of the 9th Engineer Battalion stand in front of the ruins of the famed Remagen, Germany, bridge Friday during a noncommissioned officer induction ceremony. (Jessica Inigo / S&S)

Members of the 9th Engineer Battalion stand in front of the ruins of the famed Remagen, Germany, bridge Friday during a noncommissioned officer induction ceremony. (Jessica Inigo / S&S) 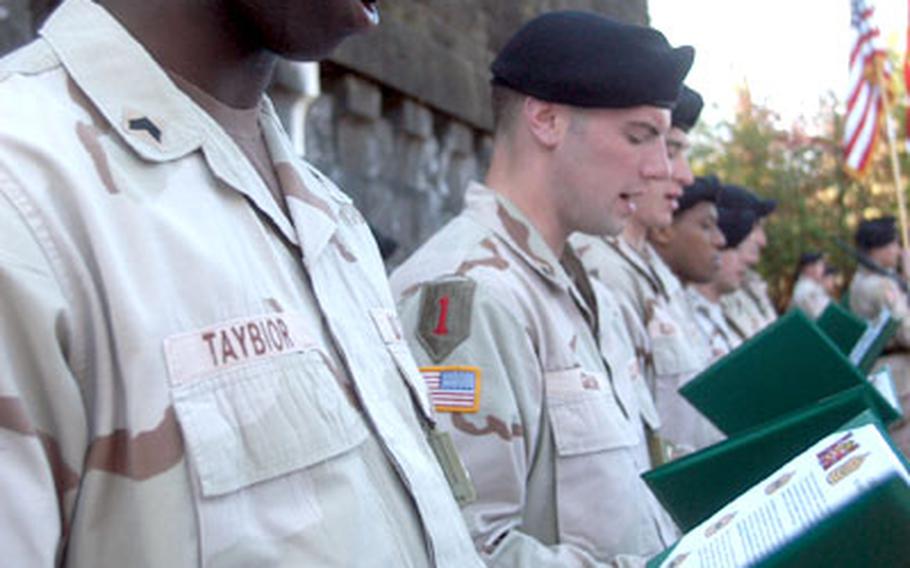 Sgt. Bulu Taybior, who waited to be inducted in to the Noncommissioned Officer Corps since being pinned in October in Iraq, said it was an honor to be inducted into a corps with such great tradition at the best historical site for his unit, the 9th Engineer Battalion in Remagen, Germany. (Jessica Inigo / S&S) 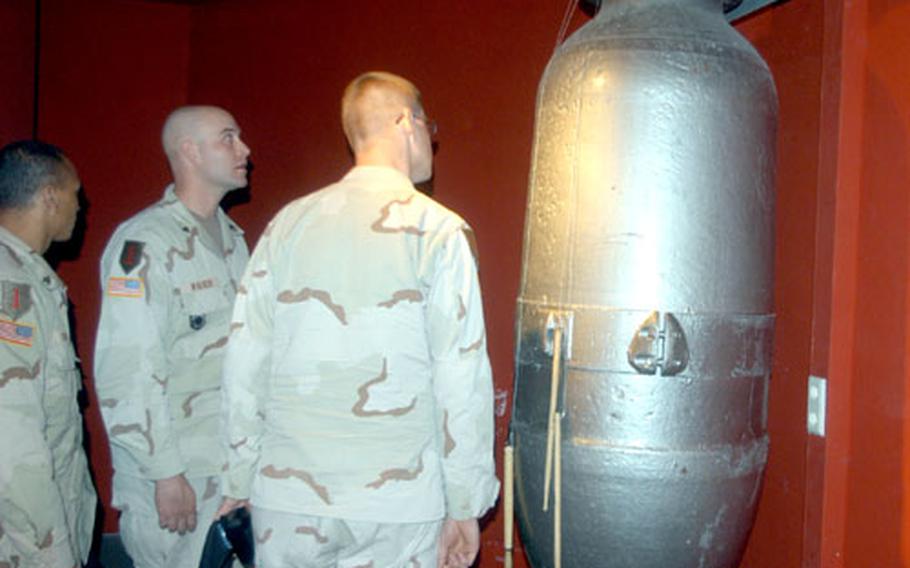 Troops visiting the Remagen Friedensmuseum at the site of the Remagen Bridge view a 1,000-kilogram bomb that the Germans tried to destroy the bridge with, but failed when it bounced into the river. (Jessica Inigo / S&S)

REMAGEN, Germany &#8212; There was no better place to welcome new leaders into the 9th Engineer Battalion. About 50 soldiers, many of whom were promoted while deployed to FOB Remagen in Iraq, were inducted Friday into the NCO corps at the real Remagen.

&#8220;When we were in FOB Remagen, I never thought a few months later I would be here. I always wanted to come here. Now, to actually be here and get inducted into the NCO corps is awesome,&#8221; said Sgt. Andrew Konopasek, who pinned on his sergeant rank in October while deployed to Iraq.

The unit&#8217;s history, which is chronicled at the Peace Museum Bridge tower ruins, includes a crucial maneuver that left the engineers with a proud story to tell.

An advance detachment of the 9th Engineer Battalion reached the Rhein in March 1945 and &#8220;crossed it with dry feet,&#8221; despite the fact the Germans tried to take down the bridge before it arrived. That led to Gen. Dwight D. Eisenhower saying the bridge was worth its weight in gold and Hitler ordering five German officers to be killed.

&#8220;Things like this don&#8217;t happen all the time,&#8221; said Sgt. Cesar Reyes, of Headquarter and Headquarters Company, after the ceremony. He was promoted in November while deployed to Iraq.

&#8220;It feels good to be part of a place that has so much unit history and then be involved in an induction ceremony here.&#8221;

The battalion returned from Iraq in February; many said the tour of duty made them feel closer to their brothers in arms who fought in Remagen.

During the ceremony, 100 troops came to the small city along the river to watch their comrades become the newest battalion leaders.

Command Sgt. Maj. Micheal Buxbaum, of the 130th Engineer Brigade, reminded the new leaders of their responsibilities. He said it begins now as a young corporal or sergeant and will last until they become sergeants major.

He said NCOs make life-and-death decisions, and the Army is a profession where mistakes could ultimately end in death. This is why, Buxbaum said, it&#8217;s important to be the best leader they know how to be, know what their troops need, and do what needs to be done.

Each inducted NCO was given a signed NCO Creed to remind them that they are the leaders of soldiers.

The crowd of American troops attracted German passersby. In the end, a handful of Germans silently waited for the ceremony to end, then took photos with troops of the same unit who 60 years ago made their city and bridge famous.