At RAF Mildenhall, spreading out the facilities should increase convenience 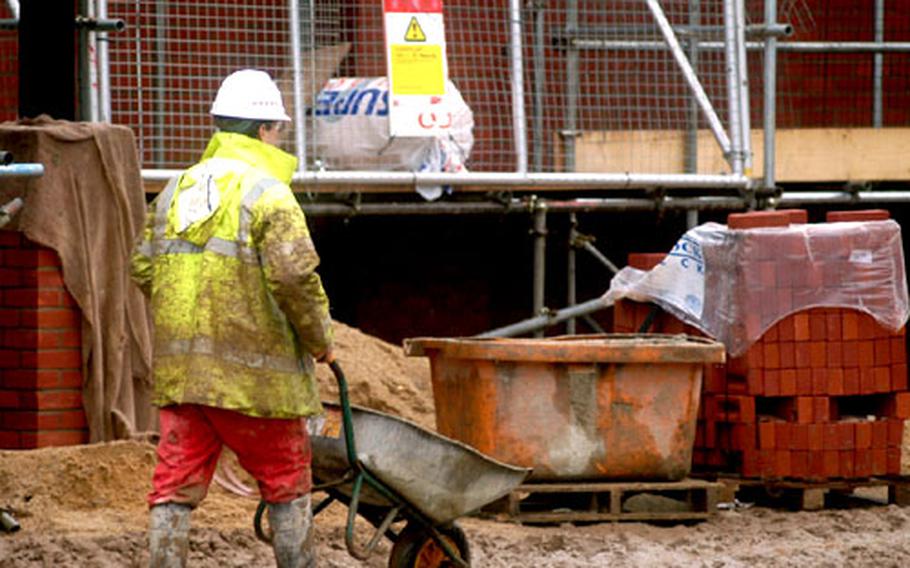 A worker makes his way across a soggy construction site Tuesday at RAF Mildenhall, England. Work at the community development site will eventually mean a new home for such community functions as the post office, bowling center and community center. (Ron Jensen / S&S)

RAF MILDENHALL, England &#8212; Activity on base will begin to significantly shift this year as RAF Mildenhall opens new facilities such as a bowling center and post office away from the administration area of the base.

A 30-acre site at the western edge of the base is being developed to allow such activities to be moved away from the center of the base where their presence is inconvenient and the source of traffic snarls.

&#8220;You have a lot of cars and people in a very small space,&#8221; Capt. Derek Ferland, commander of the engineer flight, pointed out.

An example is the post office, which is near the engineer squadron building and several other administration offices and where parking is at a premium.

Besides the bowling center and post office, the newly developed site eventually will include a much larger community center, sports fields, a car wash and a temporary living facility. All of which will ring the base exchange.

RAF Mildenhall was constructed in the 1930s while the winds of war were blowing on the far side of the English Channel. Since the U.S. presence began in the 1950s, the base has been altered somewhat, but all with a mind to maintaining the historical heritage.

As buildings became available, they were used for whatever purpose was needed &#8212; a post office, a community center, a commissary. The result is a jumble of buildings serving the mission and the community needs of base personnel.

The outdoor recreation center opened more than a year ago on the site. Other services will be opening there in the current year, with more on the way.

Development of the site required cutting down many trees, Davis said. They had been planted years ago as a crop, so they were not natural to the area. She said the plan is to landscape the area with native hardwood trees.

Here is an update on services planned for the site:

&#182; Bowling Center: The $4.5 million building due to open in June will have 12 lanes, the same number as the current facility. The red brick building will include a larger dining area and retail area. The current building is not structurally sound enough for renovation, so it will be torn down.

&#182; Sports Fields: Construction will begin in April on two softball fields and one soccer field. Ferland said the facilities could be available for late summer activities. The cost is about $730,000. Long-term plans include a running track that will meander through trees on the site at a cost of $450,000.

&#182; Temporary Living Facility: The 48-room, three-story building will be in addition to current temporary living facilities. It will be next to the exchange and include 40 double rooms and eight single rooms. The price tag is $10 million, and the facility should open in July.

&#182; Car Wash: The three-bay car wash will be built near the gas pumps, although funding has not been finalized, Ferland said. If funded, it would be under construction one year from now and open in the spring of 2005.

&#182; Post office: Construction of the $3.3 million building is expected to start this summer, with an opening set for June, 2005. &#8220;This is going to have a major change in our traffic,&#8221; said Davis. The new post office will include 6,000 mailboxes large enough to hold a compact disc, an improvement over the current boxes too small for such a package.

&#182; Community Center: The current Bob Hope Community Center has only 30 percent of the space it is allowed under Air Force regulations, said Davis. The new building will cost $13 million and include space on three stories. Construction will begin in about three years. Davis said the engineers would ask that the name of the current facility be transferred to the new one.