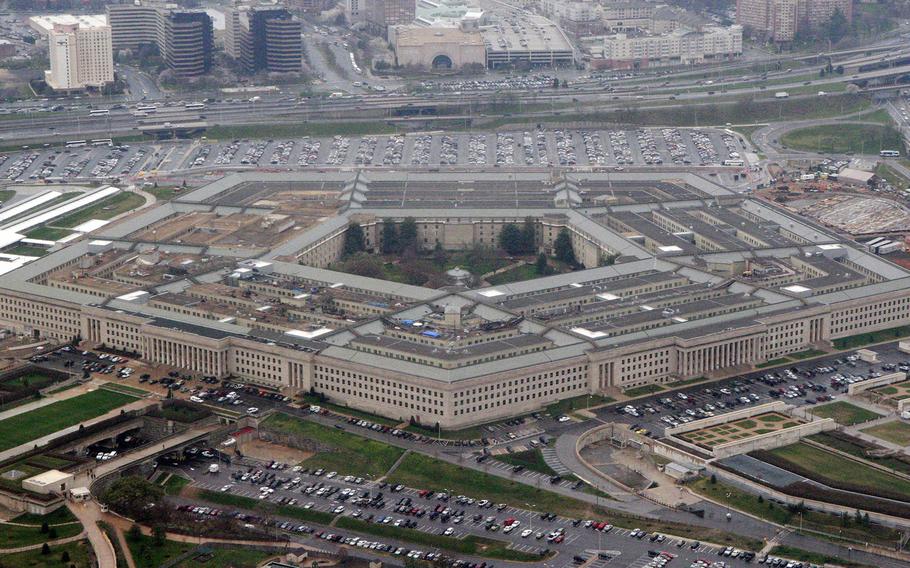 The Pentagon is seen in this aerial view in Washington, D.C. on March 27, 2008. (Charles Dharapak/AP)

Roughly half of the Defense Department’s nearly 750,000 civilian employees worldwide reported for duty to fill out paperwork acknowledging their furloughs Monday before they were to be sent home by noon, Pentagon officials said. It was not clear precisely how many of the more than 10,000 civilian employees stationed at the Defense Department’s headquarters building in Arlington, Va., received furloughs.

Those civilians appeared likely to return to work Tuesday as Senate leaders announced just after noon they had reached a tentative deal to reopen the government later Monday.

For now, military operations across the world – especially those in combat zones including Afghanistan, Iraq and Syria – have seen no major impacts because of the lapse in appropriations, officials said. But they warned a prolonged shutdown would be a burden to the Defense Department.

Furloughs “will have a significant impact on contracting, medical facilities, as well as morale,” said Army Lt. Col. Michelle Baldanza, a Pentagon spokeswoman. “Despite the shutdown, the Department of Defense will continue carrying out our fundamental responsibility to defend our nation and the American people.”

Workers receiving furloughs included all civilian personnel who were not deemed absolutely necessary for national security or to protect local personnel and property.

By noon Monday at the Pentagon, the normally busy hallways were sparsely populated and parking lots began to empty.

Uniformed servicemembers, however, remained at their desks, tasked with their normal work and, in some cases, the work of their furloughed civilian colleagues, some military personnel, who requested anonymity, told Stars and Stripes.

Despite the shutdown, services around the Pentagon remained open, including the building’s many contactor-run restaurants and shops, laundry services, civilian-run medical facilities and its exchange and gym, which are not funded by appropriations.

Meanwhile, across the nation, military training continued. At Fort Polk, La., the Army’s 1st Security Force Assistance Brigade continued its training rotation at the Joint Readiness Training Center where the new unit is preparing for an upcoming deployment to Afghanistan, a spokesman said.

While the shutdown curtailed temporary travel assignments for most military and Defense Department civilians, Defense Secretary Jim Mattis departed Washington on Sunday for a visit to Indonesia and Vietnam, where he was to meet with those nations’ defense leaders to “discuss security challenges and shared interests” and to “re-affirm the enduring U.S. commitment to the Indo-Pacific,” according to a Pentagon statement.

In a memorandum to the Defense Department, Mattis sympathizes with people impacted by the shutdown but encouraged the department to continue its work.

“I recognize the consequences of a government shutdown,” Mattis wrote. “You have my personal commitment that the department’s leadership will do our best to mitigate the impacts of the disruptions and any financial burdens to you and your families.

“Steady as she goes – hold the line. I know our nation can count on you.”